1st-place Packers visit Vikings, with Dillon at RB for Jones 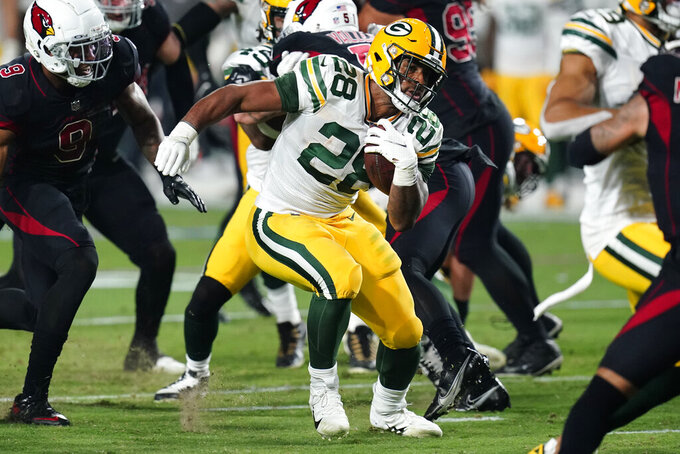 Green Bay Packers running back A.J. Dillon (28) during the first half of an NFL football game against the Arizona Cardinals, Thursday, Oct. 28, 2021, in Glendale, Ariz. (AP Photo/Ross D. Franklin)

BETTING LINE: Packers by 2 1/2, according to FanDuel Sportsbook.

TURNOVER DIFFERENTIAL: Packers plus-7; Vikings plus-6.

PACKERS PLAYER TO WATCH: RB A.J. Dillon. The second-year player has temporarily taken over the lead role in the backfield with Aaron Jones down with a minor knee injury. Dillon had two of his four career rushing TDs last week against Seattle. The only two opponents the Vikings have held under 100 rushing yards have come in their last three games: the Cowboys (78) on Oct. 31 and the Chargers (82) last week.

VIKINGS PLAYER TO WATCH: WR Justin Jefferson. After getting lost in the shuffle with only nine total targets for five receptions in the first two games after the bye week against Dallas and Baltimore, Jefferson came roaring back last week at Los Angeles with nine catches for 143 yards in a concerted effort by QB Kirk Cousins and the coaches to get him the ball. The Packers have not allowed a 100-yard receiver in four weeks since Washington's Terry McLaurin.

KEY MATCHUP: Packers OLB Preston Smith vs. Vikings LT Christian Darrisaw. With the status of OLB Rashan Gary uncertain because of an elbow injury and another key pass rusher, OLB Whitney Mercilus, out for the season with a torn biceps, the Packers will lean heavily on Smith to pressure Cousins and hold the edge against RB Dalvin Cook. Smith, a former teammate of Cousins in Washington, has three sacks this year. The rookie Darrisaw will make his fifth career start.

KEY INJURIES: Jones is out. Gary has been practicing with a brace on. LT David Bakhtiari is a possibility to make his season debut. He's been working his way back from a torn ACL. Four starters — CB Jaire Alexander (shoulder), OLB Za’Darius Smith (back), TE Robert Tonyan (knee) and C Josh Myers (knee) — remain out with long-term injuries. ... The Vikings have C Garrett Bradbury and S Harrison Smith back from a two-game absence on the COVID-19 list and expect CB Patrick Peterson (hamstring) to return after missing the last three games. LB Anthony Barr (knee) sat out last week but has returned to practice. DT Michael Pierce (elbow) will miss a sixth straight game. DE Danielle Hunter (pectoral) and TE Irv Smith Jr. (knee) are out for the season.

SERIES NOTES: The Packers have won their last two games at U.S. Bank Stadium after losing in their first three visits. ... QB Aaron Rodgers is 7-6 as the starter at Minnesota and 15-9-1 against the Vikings overall. ... Vikings coach Mike Zimmer is 6-7-1 against Green Bay. ... Cousins is 2-3-1 against the Packers as Vikings starter and 3-4-1 in his career overall.

STATS AND STUFF: The Packers, tied for the best record in the NFL, have a franchise-record seven-game winning streak on the road against division opponents. Their last such loss was at Chicago on Dec. 16, 2018. ... The Packers last week stuck Seattle QB Russell Wilson with the first shutout of his 10-year career. ... Packers LB De’Vondre Campbell is the only player in the league with 85-plus tackles, multiple interceptions and multiple forced fumbles. … Rodgers has a combined 51 TD passes and seven interceptions in 25 career starts against the Vikings, including playoff games. ... Packers WR Davante Adams has nine TD catches over his last eight games against the Vikings. ... Eight of Minnesota’s nine games have been decided by seven points or less. ... The Vikings' defense has forced 10 turnovers in the last five games. ... Cousins, who has the best interception percentage (0.6) in the NFL, had his first lost fumble of the season last week. He lost 15 fumbles over his first three years with the Vikings. ... The Vikings lead the league in fourth-down conversions (8 for 11) at 73%, but rank just 26th in third-down rate (45 for 126) at 36%. ... Cook has totaled 631 yards and eight TDs from scrimmage in five career games against the Packers.

FANTASY TIP: Packers kicker Mason Crosby has missed seven of his last 12 field goal attempts, after making a franchise-record 27 in a row. Vikings kicker Greg Joseph has made all 14 kicks, including six field goals, over the last three games. He's 10 for 11 on field goals and 6 for 6 on extra points inside U.S. Bank Stadium this year.