49ers can clinch playoffs with 6th straight win over Rams 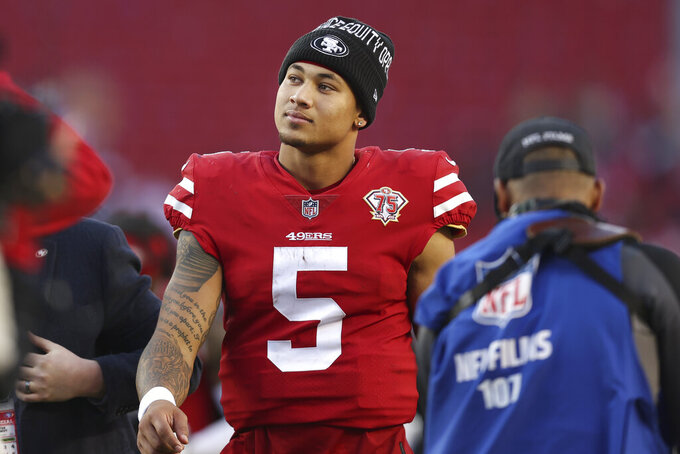 INGLEWOOD, Calif. (AP) — The San Francisco 49ers' domination of the Los Angeles Rams is well beyond a quirk or a coincidence at this point.

With five consecutive victories over their NFC West rivals, the 49ers own the Rams in a way that defies easy explanation — and poses a major obstacle to the Rams' hopes of winning the division with a regular season-ending victory Sunday at SoFi Stadium.

“Yeah, they’ve had our number, at least since I’ve been here,” Rams cornerback Jalen Ramsey said. “It is frustrating, but they don’t have mind control over us or nothing. It’s just how the games went. We’re not going out there on Sunday thinking, ‘Oh, we’ve lost this many games to them.’ We’re going out there confident.”

The Rams (12-4) are headed to the playoffs for the fourth time in five seasons under Sean McVay, but they would clinch their third NFC West title in that stretch if they can snap their three-year skid against the 49ers (9-7). Los Angeles would also win the division if Seattle upsets Arizona (11-5).

San Francisco needs a sixth straight win over the Rams or a loss by New Orleans to Atlanta to clinch its second playoff berth under Kyle Shanahan, who has beaten McVay — his former Washington co-worker — in six of their nine NFC West meetings.

“I think it’s two teams that respect each other a lot,” Shanahan said. "We go hard. I would guess we’ve won the turnover battle the majority of the times, but ... I've never really tied those (wins) together, and especially being this one right now, it really has no bearing on what’s happened in the past.”

McVay and Shanahan are good friends who see nothing personal in a rivalry that has been tilted dramatically to the north for nearly all of their concurrent careers. McVay has no incisive answers on what the Rams must to do break through.

McVay and Shanahan got their jobs a few weeks apart in early 2017, and they’ve both led their teams to one NFC title and a Super Bowl defeat. Little else is similar about their tenures, however — McVay’s Rams have roundly outperformed Shanahan’s 49ers in almost every metric except these confounding head-to-head matchups.

Put it this way: If the 49ers win Sunday and then win their first 16 games next season while the Rams go 0-16, Shanahan and McVay would finally have the same career head coaching record.

San Francisco routed the Rams 31-10 earlier this season, holding Los Angeles to its lowest point total of the year. The 49ers posted their largest margin of victory in their nine wins — and the Rams had their biggest margin of defeat since 2019.

“It’s a confident locker room, no doubt about it,” said Jimmy Garoppolo, who has never lost to the Rams in five meetings. “But I would not say we’re cocky by any means. I think we’re confident in the right way to go on that field, and we’ve proved it in the past, and we’ve just got to go do it again on Sunday.”

The 49ers have a big question at quarterback with Garoppolo returning from a thumb injury. Garoppolo won’t be completely healed, but might be able to play through the pain. If he’s too compromised, San Francisco could opt for rookie Trey Lance again. Lance threw two TD passes last week in his second career start and looked much more comfortable than in October.

“I’m going to do everything I can to be out there with the guys," he said. "It’s a big one ... but at the same time, you’ve got to be smart and think about what’s going to be best for the team.”

Rams receiver Cooper Kupp is in position to become the fourth player in NFL history to lead the league in receptions, yards receiving and touchdown catches.

Kupp heads into Week 18 with 138 catches, 1,829 yards and 15 TDs, all tops in the league. Only Jerry Rice, Sterling Sharpe and Steve Smith have won the triple crown. Kupp is also 12 receptions and 136 yards away from setting the single-season NFL records in both categories, although Kupp believes those potential achievements would deserve a big asterisk in a 17-game season.

The Niners spent most of the week with Josh Norman as the only healthy cornerback on the active roster. San Francisco placed Ambry Thomas, K’Waun Williams, Dontae Johnson and Deommodore Lenoir on the COVID-19 list, although some of those players could be cleared to return by Sunday. Emmanuel Moseley also returned to practice from an ankle injury and could be activated from IR.

“We’ve been very fortunate this year,” Shanahan said. “We haven’t had it hit us like we did last year. We got it all in one position right now, pretty heavy. Finding it early in the week gives us a chance. Any time guys miss practice, it doesn’t help. But the main thing is it’s late in the year and our guys have a good idea what they’re doing, so the goal is just to get them to Sunday and hopefully that’ll be a possibility.”