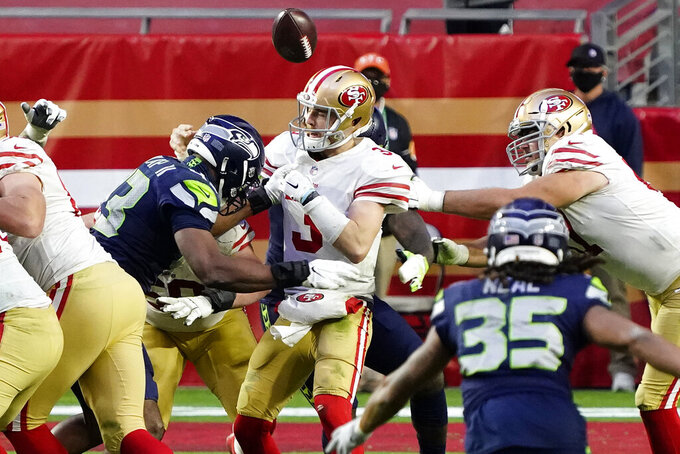 After an injury-plagued campaign that ended with more than a month on the road, the San Francisco 49ers are happy finally to put the disappointing 2020 season behind them.

The Niners ended this season the same way they ended the last one, blowing a 10-point fourth quarter lead before falling to the Seattle Seahawks 26-23 on Sunday.

While the feelings after blowing that lead to Kansas City in the Super Bowl were anger and frustration, the mood after this loss was a sense of relief for the 49ers (6-10). They had been eliminated from the playoffs two weeks ago and were eager to get home after spending the last month of the season in Arizona because of COVID-19 restrictions that forced them out of their home stadium.

“It didn’t go the way we wanted it to go,” defensive lineman Arik Armstead said of the season. “It has been a long, trying year. It seems like the longest year ever. There is some relief there to get back to next year and normal and getting back to the stadium and normalcy back to our league and around the world.”

The season got off to a rough start when the Niners lost several key players to injuries in the opening two weeks, including quarterback Jimmy Garoppolo, star tight end George Kittle, 2019 Defensive Rookie of the Year Nick Bosa, cornerback Richard Sherman and running back Raheem Mostert.

That set the tone for the entire season as the Niners struggled to stay healthy, forcing coach Kyle Shanahan to try his best to piece together a competitive team.

They had a chance when they beat the Rams to improve to 5-6 in late November. But on the way to that game they learned that Santa Clara County had banned contact sports because of coronavirus concerns.

They lost their first two “home” games in Arizona before getting eliminated the following week with a loss at Dallas that had them playing out the string the past two weeks before they could return home.

“Very excited,” Shanahan said about returning to the Bay Area. “First time I’ve ever packed two days in advance for anything. We’re all excited to see our families. ... Being stuck in a hotel for 30 days does wear on you a little bit.”

Now the Niners can turn their focus to 2021 when they will need to make decisions about key free agents like Sherman and safety Jaquiski Tartt, the future of Garoppolo and likely look for a new defensive coordinator.

Robert Saleh’s unit was one of the strengths of the team. He is expected to interview for head coach openings in the next few weeks and might not be back next season.

“I would be very surprised if we don’t lose him,” Shanahan said. “I don’t know what’s wrong with people if they don’t hire him. He’s as good as you can get, knows more about football in all three phases. He’s going to hire the best staff. He knows about players. He knows who knows what they’re talking about, who doesn’t know what they’re talking about. And he also knows how to deal with people. I hope everyone’s not very smart and doesn’t hire him so I can keep him. But I’m expecting that not to happen.”

Saleh’s defense was stout for most of the game, holding Russell Wilson and the Seahawks to six points in the first three quarters before three TD drives in the fourth put San Francisco away.