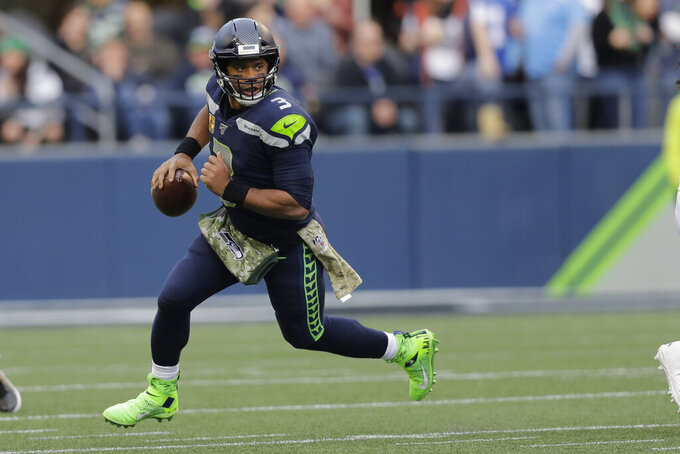 SANTA CLARA, Calif. (AP) — The priority when facing the Seattle Seahawks for years was figuring out how to deal with the Legion of Boom and that dominant defense.

Now the strength for Seattle is Russell Wilson and a dynamic passing offense, creating quite the interesting matchup when the Seahawks (7-2) visit San Francisco on Monday night to take on the 49ers (8-0) and one of the league's stingiest defenses.

"I used to love Russell when I was on his team, but he's been creating a lot of nightmares lately," said 49ers defensive coordinator Robert Saleh, a former assistant in Seattle. "They're doing a really, really nice job and it's really cool the way those guys work together, because a lot of it is Russell starts scrambling. His throws on the run and all that stuff, his stuff out of the pocket and the way they're married together, and I know they practice it all, it's almost a play and then a play when he starts scrambling, which they work on. The way they've got that thing dialed in is what makes it very unique and what makes it special."

San Francisco has completely shut down opponents over the first half of the season, ranking near the top of league in nearly every significant defensive category.

With a fierce pass rush led by rookie edge rusher Nick Bosa, offseason acquisition Dee Ford and inside pushers DeForest Buckner and Arik Armstead, have done a good job generating consistent pressure and rank tied for third in the league with 30 sacks.

When the pass rush hasn't gotten to the quarterback, the coverage in the secondary has been outstanding as well led by former Seahawks star Richard Sherman, who looks to be back to his elite shut-down form after working his way back last year from an Achilles' injury.

San Francisco has allowed a league-low 138.1 yards passing per game and is also best in the league with 241 yards allowed per game.

The Niners also rank best in the league in preventing touchdowns in the red zone, allowing them on less than one-third of trips inside the 20, have allowed the second fewest points per game (12.8) and rank tied for fourth with 16 takeaways.

But much of that came against some offenses that aren't considered among the league's elite with San Francisco beating winless Cincinnati in Week 2, Pittsburgh backup quarterback Mason Rudolph in his first start in Week 3, a dysfunctional Cleveland team the following game, a helpless Washington team in a downpour and another backup quarterback in Carolina's Kyle Allen.

"That was legitimately just not up to our standard of football," Sherman said. "At the end of the day, I think just about everybody who's on our defense would say it. It's different between getting beat while executing and you not executing so you get beat. That was the problem in that game. We were getting beat because we weren't executing. ... I was legitimately upset because it wasn't to our standard of play."

They'll have more tough tests like that in the second half of the season with a game against Wilson, a rematch with Murray, and matchups against Green Bay's Aaron Rodgers and Baltimore's Lamar Jackson coming up in the next four weeks.

Wilson is one of the leading MVP candidates with 22 touchdown passes and only one interception so far and the Seahawks could be even more dangerous with the addition of big-play receiver Josh Gordon.

Wilson has tormented the Niners countless times over the years, winning 12 of his 15 starts against them, including the AFC championship game following the 2013 season.

With his ability to extend plays with his legs and turn what seemed to be negative plays into positive ones, the Niners know this won't be easy.

"He's one of the better guys at it," Buckner said. "He's done it for a long time. He knows how to dodge guys in the pocket. He has a really good feel of getting his o-line back in places to really help defend him from guys trying to sack him. ... Playing against him for three years, sometimes you feel like you know his escape routes and stuff like that and he'll still end up making you miss. He made me miss a couple last year and I'm still thinking about that."

NOTES: TE George Kittle missed his third straight practice with injuries to his knee and ankle and his status for the game remains in doubt. ... K Robbie Gould (quadriceps) also didn't practice. ... CB Ahkello Witherspoon (foot) got back to practice on a limited basis and will be a game-time decision.