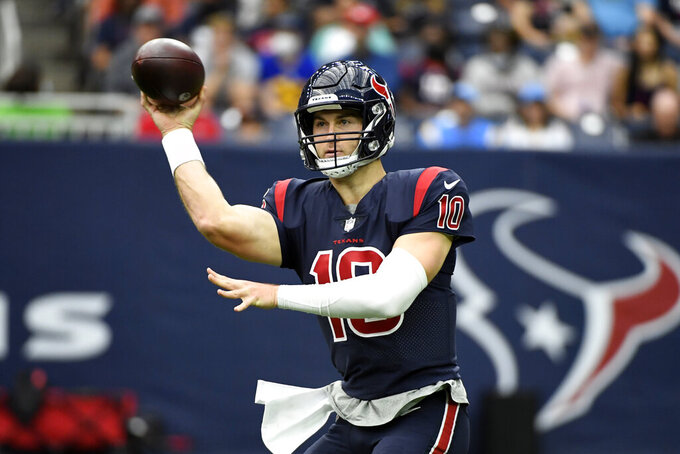 Houston Texans quarterback Davis Mills (10) throws a pass against the Los Angeles Chargers during the first half of an NFL football game Sunday, Dec. 26, 2021, in Houston. (AP Photo/Justin Rex)

SANTA CLARA, Calif. (AP) — For the San Francisco 49ers, the path is simple: Win the final two games and they get back to the playoffs for the second time in five seasons under coach Kyle Shanahan.

After squandering some of their margin for error with a loss last week at Tennessee, the Niners (8-7) head into their final home game on Sunday against Houston (4-11) still in control of their postseason fate.

“I don’t know the exact numbers. The one thing I do know is if we win both of the games that we’re in,” coach Kyle Shanahan said. “I know it’s going to be hard if we lose any. So not taking it past that, you look at it as if you lose your season is over and if you win, it keeps going. And that’s, to me, the definition of the playoffs. So our players are aware of that and that’s why we have to make sure we take care of business.”

San Francisco was unable to do that last week when the Niners blew a 10-point halftime lead and lost 20-17 to the Titans.

Even with the loss, San Francisco can clinch the playoffs this week with a win over the Texans and a New Orleans loss to Carolina. The Niners will also clinch with wins this week and in the finale against the Rams, but would need help if they lose either game.

They might have to deal with the Texans without quarterback Jimmy Garoppolo, who sprained his right thumb last week. Garoppolo is trying to play this week but if he doesn't rookie Trey Lance will make his second start.

The playoffs have long been out of reach for the Texans, but Houston does have another opportunity to play spoiler.

The Texans followed up a Week 15 win over Jacksonville by upsetting the playoff-contending Chargers last week. A win against the Niners would give Houston its first three-game winning streak since the 2018 season.

“Obviously, winning’s a lot better than losing,” Texans quarterback Davis Mills said. "I guess there’s just morale in the locker room that everyone’s excited to keep this win streak alive, keep going and attacking each week with that relentless attitude.”

Garoppolo played through the thumb injury for more than a half last week but struggled at times, including when he threw his second interception of the game on the opening drive of the third quarter.

“He’ll get more playing time, more practice this week and if he plays, he’ll get a whole other game," Shanahan said. "I’m sure it won’t be perfect, but I think he’s been doing a better job in all areas the more he has gotten practice in.”

Mills has played his best football in the past three games after veteran Tyrod Taylor was benched. Mills, a third-round pick from Stanford, has thrown for 794 yards combined with five touchdowns and just one interception in that span, and the Texans have won two of three games.

His biggest improvement has come in ball security after he struggled with turnovers in the six starts he made early in the season when Taylor was injured. Mills had eight turnovers combined in those games as the Texans went 0-6.

He said he feels much more comfortable now and has a better knowledge of the offense.

“I’m just able to go out there and play faster, and I guess that leads to better execution,” Mills said.

No matter who's at quarterback for the Niners, Deebo Samuel figures to be a major part of San Francisco's offense. Samuel is coming off his fourth game of the season with at least 150 yards receiving after having nine catches for 159 yards against the Titans.

Samuel joined Hall of Famer Jerry Rice as the only Niners to do that. Samuel also contributed once again on the ground with five carries for 32 yards as he became the first Niners player since Frank Gore in 2009 to top 1,500 yards from scrimmage with at least 12 TDs.

“Deebo is a very special person,” Texans cornerback Desmond King said. "He is a guy that can have the ball in his hands. He can catch the ball. He’s a gadget guy so we are going to have to be prepared for what he has coming to the table.”

The Texans remain last in the NFL in yards rushing a game despite running for a season-high 189 yards against the Chargers. The Texans are averaging just 84.8 yards rushing even after their big day led by a career-high 149 yards rushing from Rex Burkhead.

Houston is focused on building on last week’s rushing performance this week against the 49ers, who rank 11th in the NFL in run defense by allowing 107.3 yards a game.

“I hope to carry it on,” coach David Culley said. “Obviously, when we’re able to do that, it makes things much better for us offensively."