Analysis: The pass seduces even the NFL's best run teams 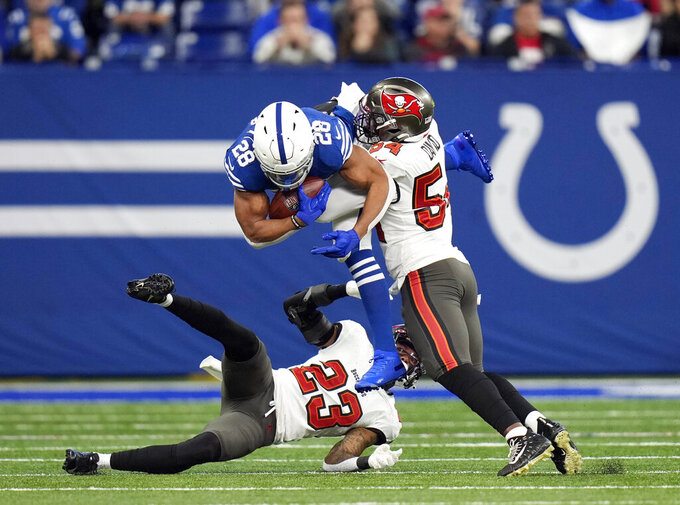 Throwing the football in the NFL is so alluring it can seduce even the best run teams.

The Indianapolis Colts forgot they have Jonathan Taylor after relying on Carson Wentz’s arm to build a 10-point halftime lead against the defending Super Bowl champion Buccaneers.

The Philadelphia Eagles climbed into the playoff race because of a potent rushing attack and let Jalen Hurts throw it away against the Giants.

If the Ravens didn’t play against the Browns, the NFL’s five top running teams would’ve lost in Week 12. The Tennessee Titans, who entered with the league’s fifth-ranked rushing offense, kept rolling on the ground with 270 yards, but they were blown out by the Patriots 36-13.

Most baffling was the Colts’ play calling in the second half.

Facing the league’s stingiest run defense, Indianapolis couldn’t get Taylor going early. The Buccaneers (8-3) weren’t going to allow Taylor, the league’s first 1,000-yard rusher this season, to beat them. They dared the Colts to throw, and Wentz responded with three perfect touchdown passes in the first half for a 24-14 lead.

The Colts (6-6) got the ball to start the third quarter and kept on throwing. Wentz dropped back on 26 straight plays at one point, including the final eight plays in the second quarter. The results in the second half were disastrous. Shaquil Barrett’s strip-sack of Wentz led to a touchdown for Tampa Bay. Wentz then threw a pick on a deep ball in which Antoine Winfield Jr. made a leaping grab over Michael Pittman Jr. That led to another touchdown for the Bucs.

When the Colts finally handed it to Taylor again in the fourth quarter, he gained 58 yards on eight carries, including a game-tying TD. But Tom Brady then led the Buccaneers on the winning drive with Leonard Fournette scoring his fourth TD of the game for a 38-31 victory.

Why didn’t Taylor run the ball on the first three possessions of the second half?

“We were rolling,” Colts coach Frank Reich said. “We tried to run it in the first quarter, this is the No. 1 run defense, and we weren’t getting anything. We tried throwing in the second quarter and started having a lot of success. Carson was hot. Called a bunch of RPOs that got to throws because they were throw reads. We come out in the third quarter, we move the ball well in the third quarter. We moved down there twice, we’re moving it well.”

The Colts became enamored with the pass because it was working, but the turnovers ended up hurting them. Perhaps, giving the ball to Taylor in the third quarter would’ve allowed Indianapolis to extend the lead and avoid those costly mistakes.

Reich’s former offensive coordinator, Nick Sirianni, helped the Eagles turn things around this season after he committed to the run. The first-year coach guided Philadelphia (5-7) to three wins in the last four weeks with a heavy emphasis on the run, led by Hurts. But against New York, the Eagles moved away from it for stretches. Hurts threw 31 passes and was picked three times, including twice in the red zone. He had a chance at the end to win it, but Jalen Reagor couldn't make a catch near the goal line and the Giants held on for a 13-7 win.

When the Eagles ran, they had success, racking up 208 yards on the ground. They just didn’t run it enough to beat the Giants (4-7).

“When you turn the ball over three times, there are different things at play there, but not a winning performance,” Sirianni said. “Running the ball was good.”

The Ravens (8-3) defeated the Browns (6-6) 16-10 despite a career-worst four interceptions by Jackson. Cleveland entered with the league's No. 1 rushing offense, but handed the ball to Nick Chubb and Kareem Hunt just 15 times while Mayfield made 37 passes.

As the weather gets colder in December, running teams will have to do what they do best to win.