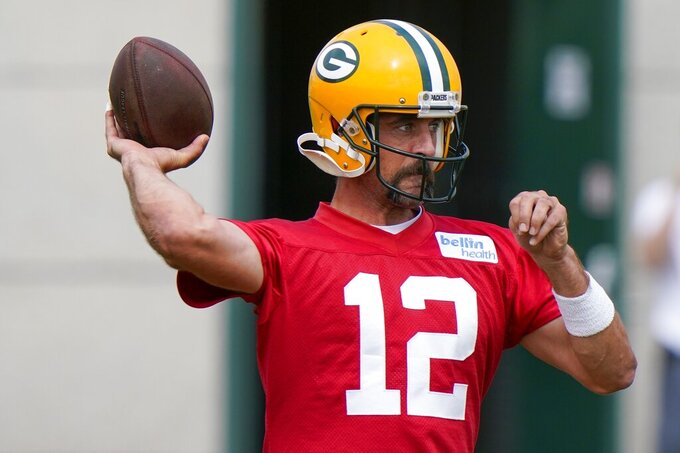 FILE - Green Bay Packers' Aaron Rodgers throws during NFL football training camp in Green Bay, Wis., in this Saturday, Aug. 15, 2020, file photo. Aaron Rodgers has made it to Green Bay on the eve of the Packers’ first training-camp workout. Rodgers was seen arriving at Lambeau Field on Tuesday morning, July 27, 2021, the day after NFL Network and ESPN reported the reigning MVP was closing in on a deal that would keep him with the Packers this season. (AP Photo/Morry Gash, File)

Aaron Rodgers wasn’t going to have a better chance to win a Super Bowl this season somewhere other than Green Bay.

The Packers weren’t going to contend for a Super Bowl without Rodgers running the offense.

Given those two factors, it shouldn’t come as a surprise that Rodgers was at Lambeau Field on Tuesday in the surest sign yet that the three-time MVP quarterback and Packers executives are at least temporarily putting aside their differences. The Packers hold their first training-camp workout Wednesday.

Rodgers skipped the Packers’ mandatory minicamp after ESPN reported in the hours leading up to the draft that he wasn’t interested in returning to Green Bay for a 17th season. Rodgers’ arrival on Tuesday followed NFL Network and ESPN reports that the two sides were close to an agreement keeping him with the Packers this season.

The long-term status of this relationship remains uncertain. ESPN reported the Packers agreed to drop the 2023 season from Rodgers’ contract and review his situation with the team at the end of the season, potentially clearing the way for his eventual exit.

The exact reasons for Rodgers’ discontent are not known. At least not publicly. Rodgers gave his biggest hints about his issues during an ESPN interview in late May.

Packers CEO/president Mark Murphy defended the organization’s culture during a news conference after the team’s shareholders meeting Monday. But he also acknowledged the standoff with Rodgers had caused team officials to look inward.

“I think any organization, you reflect back and you evaluate the decisions you’ve made and things you might have done differently, but I’m not going to share them here,” Murphy said.

For now, they’ll continue this uneasy marriage while seeking the Super Bowl title that has eluded both parties since the 2010 season. The Packers have lost in the NFC championship four of the last seven seasons, including each of the past two years.

The Packers are good enough to make another Super Bowl run, as long as it includes Rodgers.

Although the Packers’ only major free-agent addition from another organization was former Arizona Cardinals linebacker DeVondre Campbell, they spent big over the last 12 months to keep All-Pro offensive tackle David Bakhtiari, defensive tackle Kenny Clark and running back Aaron Jones, as well as cornerback Kevin King.

If Rodgers had been traded, he couldn’t have landed anywhere that offered him a better chance to win.

The Denver Broncos seemed the most natural trade possibility with their talented defense, promising receiving corps and uncertain quarterback situation. Rodgers could have made the Broncos instant playoff contenders but also would have needed to compete in the same division with Patrick Mahomes and the Kansas City Chiefs, whereas he makes the Packers clear favorites in the NFC North.

Given the Packers are built to win now, they couldn’t afford to open the season with 2020 first-round pick Jordan Love as their starting quarterback. Love didn’t play a single down in his rookie season and never even got to participate in any preseason games due to the pandemic. The Packers gave him the vast majority of reps in their minicamp just in case he needed to take over.

The Packers had added a veteran insurance policy by signing Blake Bortles, but he hasn’t started a game since 2018 and certainly isn't in Rodgers' class. The Packers released Bortles as well as Jake Dolegala on Tuesday, leaving Rodgers, Love and Kurt Benkert as their only quarterbacks.

Rodgers’ arrival in Green Bay this week indicates the Packers don’t have to worry about how they can win without him. They can instead look forward to having one of the league’s most explosive offenses.

They have arguably the league’s top quarterback/receiver tandem with the reigning MVP throwing to All-Pro wideout Davante Adams, whose contract expires at the end of the season. The Packers did lose running back Jamaal Williams to the Detroit Lions in free agency, but 2020 second-round pick A.J. Dillon should emerge as an ideal complementary back to Jones.

The Packers’ biggest preseason concerns now are the health of Bakhtiari after he tore his anterior cruciate ligament on Dec. 31, and the situation at center following All-Pro selection Corey Linsley’s offseason signing with the Los Angeles Chargers.

Replacing Linsley will be tough. Replacing the guy who has taken Linsley’s snaps for the last several years would have been significantly tougher.