Another slow start costs Titans chance to move above .500 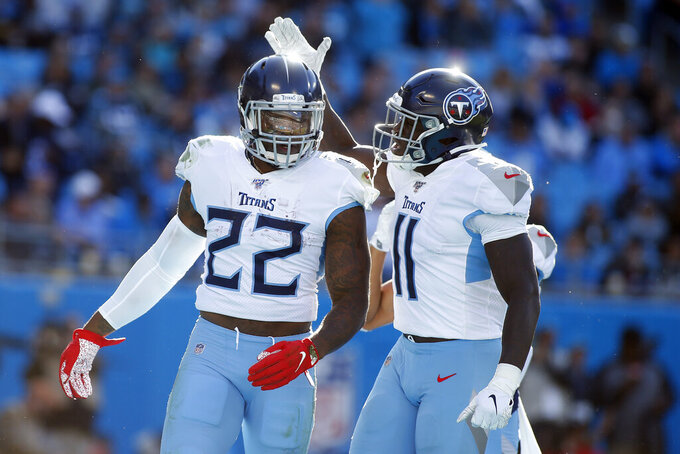 NASHVILLE, Tenn. (AP) — The Titans are doing their own version of a Tennessee two-step. Win two games, then it's back they go with nobody to blame but themselves.

Tennessee (4-5) missed another chance to climb above .500 with a 30-20 loss at Carolina, and once again the Titans struggled from the opening kickoff with too many penalties, sacks and missed kicks, and they added a new wrinkle with turnovers. Derrick Henry got only two carries in the first half for 4 yards, though he finished with 63 yards and a touchdown. Top wide receiver Corey Davis had only one ball thrown his way before halftime.

"Those are a lot of self-inflicted wounds that's really just not allowing us to get into drives," Titans coach Mike Vrabel said Monday.

Starting slowly is nothing new for the Titans under first-time offensive coordinator Arthur Smith. The Titans have been shut out on the scoreboard over the first 30 minutes four times this season, though the Carolina loss was the first time since quarterback Marcus Mariota was benched in favor of Ryan Tannehill. They've scored only one touchdown in the first half combined in their five losses. Asked how he evaluates Smith's performance so far, Vrabel made clear nobody has performed well enough.

The defense remains the one area that has been consistent and effective, but even that took a hit in Carolina without four-time Pro Bowl defensive tackle Jurrell Casey, who has an injured shoulder.

The offensive line remains the Titans' biggest issue. Center Ben Jones missed his first game this season with a concussion, but three-time Pro Bowl left tackle Taylor Lewan struggled with two penalties on the Titans' second drive and rookie right guard Nate Davis followed two plays later with a face mask penalty of his own. Right tackle Jack Conklin had a false start to begin Tennessee's third possession. The Titans allowed four sacks and have allowed an NFL-worst 38 this season.

Harold Landry. The second-year linebacker had his first career interception, a sack and two tackles for loss, and Landry now has a career-high six sacks.

Ryan Succop. The veteran kicker missed three field goals in his first game back off injured reserve, points that would've given the Titans a chance in Carolina. Succop, who kicked in a pair of preseason games, said when placed on injured reserve that the time would allow him to get the full strength back in his kicking leg after offseason surgery. He missed from 43, 56 and 44 yards. Vrabel said the 56-yarder can be blamed on a sack that led to the long attempt, but Vrabel has lost patience with Tennessee's kicking game. Three kickers have missed a combined nine attempts.

"The expectation is that they make them," Vrabel said.

Cornerback Malcolm Butler left the game with an injured left wrist. Asked if Butler will miss the rest of the season, Vrabel said that's a possibility.

2 — The number of carries Henry had in the first half against one of the NFL's worst run defenses remains baffling, no matter the excuses.

The Titans still have hope with two games left to play against AFC South leader Houston (6-3). But the schedule only gets tougher from here, starting Sunday when they host the Kansas City Chiefs (6-3), who should have reigning NFL MVP Patrick Mahomes back. Then the Titans reach their bye for a chance to try to fix some of their problems.

Vrabel said they can't lose too much ground.

"We took a step back in trying to do that, and we're going to try to take a step forward," Vrabel said.