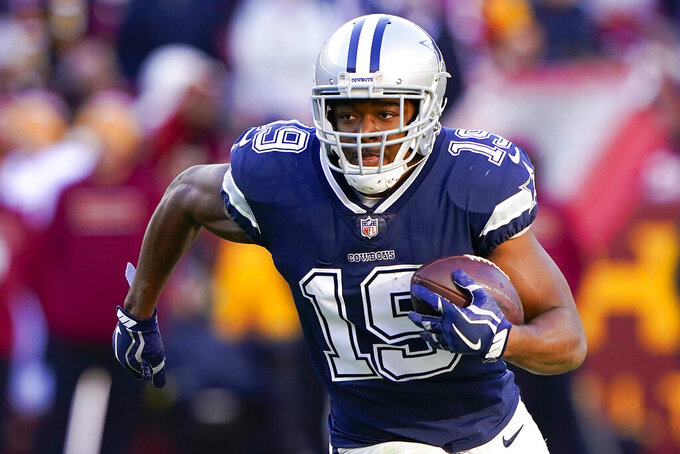 FILE - Dallas Cowboys wide receiver Amari Cooper (19) runs with the ball during the first half of an NFL football game against the Washington Football Team, on Dec. 12, 2021, in Landover, Md. The Cleveland Browns have found their No. 1 wide receiver, agreeing to a deal with the Cowboys for Cooper, a person familiar with the negotiations told the Associated Press on Saturday, March 12, 2022. The Browns will send a fifth- and sixth-round draft pick in 2022 to Dallas for Cooper, said the person who spoke on condition of anonymity because the teams can not complete the swap until the new league year begins next Wednesday. (AP Photo/Alex Brandon, File)

CLEVELAND (AP) — The Browns weren't willing to wait for free agency or the NFL draft to get their No. 1 wide receiver.

Cleveland general manager Andrew Berry filled his club's biggest need on Saturday by agreeing to acquire Amari Cooper in a trade with the Dallas Cowboys, a person familiar with the negotiations told The Associated Press on Saturday.

The Browns would send a fifth- and sixth-round draft pick in 2022 to Dallas for Cooper, according to the person who spoke to the AP on condition of anonymity because the teams cannot complete the deal until the new league year begins Wednesday. ESPN was first to report the proposed trade.

Cooper would give the Browns a deep threat, filling the void left when Odell Beckham Jr. forced his release last season. He'd be a prime target for quarterback Baker Mayfield, assuming he returns as Cleveland's starter following an injury-altered season.

The Cowboys were intent on dealing Cooper, who signed a five-year, $100 million contract extension in 2019 and hasn't produced the way Dallas had hoped. He was likely to be released if the Cowboys couldn't strike a deal, and the Browns jumped at the chance to get the 27-year-old before he hit the market.

Cooper spent the past four seasons with Dallas. He had 68 catches for 865 yards and eight touchdowns in 2021. A three-time Pro Bowler, he has had five 1,000-yard seasons as a pro — two with Dallas, two with the Raiders and in the season he split with both teams after being traded in 2018.

He immediately would move to the top of Cleveland's depth chart, and his addition would likely have the Browns focusing on other needs in free agency and perhaps a defensive player instead of a receiver with the No. 13 pick in this year's draft.

Once Beckham left in November, the Browns were without an experienced receiver capable of stretching defenses. Also, No. 2 wide receiver Jarvis Landry suffered a knee injury in Week 2 and struggled the rest of the season, posting career lows in catches, yards and TDs while missing five games.

Landry's days with Cleveland appeared numbered. Not long after agreeing to get Cooper, the Browns gave Landry permission to seek a trade, the person said. He is scheduled to make $15.1 million next season, and his salary-cap hit is $16.379 million, so the Browns could save nearly $15 million on their cap by trading or releasing Landry.

The five-time Pro Bowler played a vital role in the Browns improving their culture, and it's not out of the question that he could stay if he restructures his deal.

Cleveland may still add more receiving depth via free agency or in a draft loaded with talented prospects. At this point, Donovan Peoples-Jones and Anthony Schwartz are their only other proven players at the position.