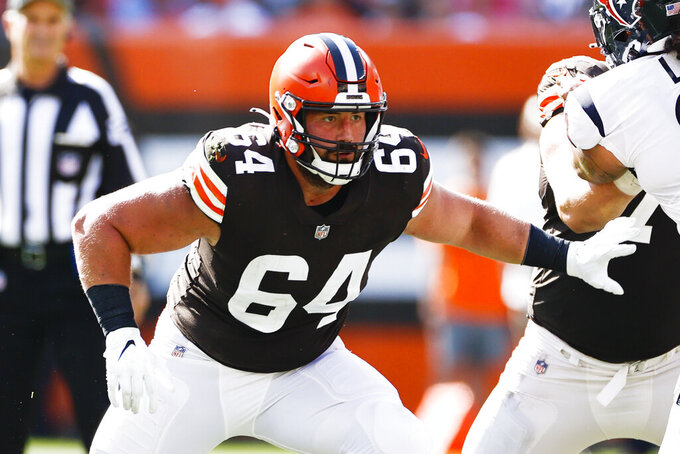 FILE - Cleveland Browns center JC Tretter plays against the Houston Texans during the second half of an NFL football game Sept. 19, 2021, in Cleveland. Tretter has been re-elected for a second term as president of the NFL Players Association. The union announced Tretter's unanimous re-election on Friday, March 11, 2022. (AP Photo/Ron Schwane, File)

CLEVELAND (AP) — The Cleveland Browns made their sales pitch to Deshaun Watson, who despite ongoing legal entanglements is getting to choose where he plays next.

A Cleveland contingent met with the controversial quarterback in Houston on Tuesday, a person familiar with the meeting told The Associated Press. The person spoke on condition of anonymity because of the sensitive nature of the situation. It’s not known who from the Browns attended the meeting.

Twenty-two women filed lawsuits alleging sexual assault and harassment against Watson, after which he didn't play for the Texans last season. But once a grand jury declined to indict him on criminal charges last week, the Browns and several other teams began pursuing the three-time Pro Bowler.

Watson still faces civil lawsuits and he was questioned at his lawyer's office for four hours on Tuesday before his meeting with Cleveland. And he might face disciplinary action from the NFL under the personal conduct policy.

The person who spoke with the AP said the Browns, who passed on taking Watson in the 2017 draft, are doing their due diligence and wanted to get to know him better,

Watson met with New Orleans and Carolina on Monday, according to multiple reports, and he's reportedly set to visit with Atlanta on Wednesday before choosing a team.

The 27-year-old has a no-trade clause built into his four-year, $156 million contract and would have to agree to a deal with Cleveland. The Texans are believed to be seeking at least three first-round picks for one of the league's most talented QBs.

The Browns' decision to visit Watson seems to signal the end of Baker Mayfield’s time as the team's franchise quarterback. The No. 1 overall pick in 2018, Mayfield ended the team’s long playoff drought before an injury-altered 2021 season.

It wasn’t a certainty that Mayfield would hang onto the starting job next season. Now, it appears to belong to Watson — or someone else.

Knowing he's probably done with the Browns, Mayfield posted a long note on social media, thanking Cleveland and its fans for embracing he and his wife, Emily.

“We have made many memories and shared growing in this process through all the ups and downs,” Mayfield wrote. "I have no clue what happens next, which is the meaning behind the silence I have had during the duration of this process. I can only control what I can, which is trusting in God’s plan throughout this process.

"I have given this franchise everything I have. That is something I’ve always done at every stage, and at every level. And that will not change wherever I take my next snap. Whatever happens. I just want to say thank you to the fans who truly embraced who I am and the mentality that aligned so well with this city’s hard working people.

“Cleveland will always be a part of Emily and my story. And we will always be thankful for the impact it has had and will have in our lives. Sincerely, Baker Reagan Mayfield.”

Any trade involving Watson would certainly trigger backlash and the Browns are weighing all those factors. Cleveland received widespread criticism in 2019 when the team signed running back Kareem Hunt, who was seen on video shoving a woman and was suspended six games by the NFL.

The Browns were again busy on Day 2 of the NFL's legal free agency tampering period.

The team released center JC Tretter, who was recently re-elected as president of the NFL Players Association, in a cost-cutting move and traded linebacker Mack Wilson to New England in exchange for linebacker Chase Winovich.

Tretter spent five seasons with Cleveland as a dependable leader and anchor of one of the league's best offensive lines. The 31-year-old played through some serious leg injuries during while playing in 80 games.

Tretter also played a major role in the union setting protocols with the league during the COVID-19 pandemic. He was unanimously re-elected to a second term on Friday.

“For the past five seasons, JC has been a mainstay and iron man at center for us," said Browns general manager Andrew Berry. "He came to our organization at a time of instability and was one of the key veterans that helped turn the tide over the past several years.

“His leadership — both within the locker room and the field — will be missed.”

Tretter posted “A letter to Cleveland” on Twitter thanking the people who work behind the scenes, the team's training and strength and conditioning staffs and his teammates, singling out All-Pro guard Joel Bitonio.

“You are the heart of the Cleveland Browns,” Tretter said to Bitonio. “It has been my pleasure to play next to you for five years and I look forward to the day you are put in the ring of honor with the other Browns greats.”

Earlier, the Browns and Patriots agreed to swap linebackers, with Wilson going to New England and Winovich headed to Cleveland. The trade can't be officially announced until the league year starts Wednesday.

Wilson was a fifth-round draft pick in 2019. The 6-foot-3, 250-pound Winovich, drafted by New England in the third round that year, has 11 career sacks in 45 games. Shortly after the deal was agreed upon, Winovich posted thanks to the Patriots on Twitter.

“I am so grateful for my experience in New England.” Winovich wrote. “The love, spirit, and support have been absolutely unreal. This entire region will always hold the most special of places in my heart.

“The time is now for the next chapter of my journey.”