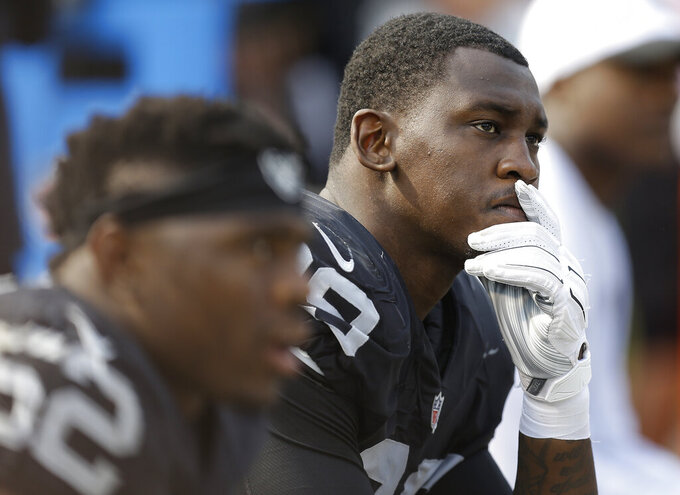 FILE - In this Sept. 13, 2015, file photo, Oakland Raiders linebacker Aldon Smith (99) sits on the bench during the second half of the team's NFL football game against the Cincinnati Bengals in Oakland, Calif. The Dallas Cowboys are taking a chance on another suspended defensive end, signing Aldon Smith to a contract while his playing status in the NFL is up in the air. A person with direct knowledge of the deal said Smith signed Wednesday, April 1, 2020. The person spoke to The Associated Press on condition of anonymity because the signing hadn't been announced. (AP Photo/Ben Margot, File)

The Dallas Cowboys are taking a chance on another suspended defensive end, signing Aldon Smith to a contract while his playing status in the NFL is uncertain.

A person with direct knowledge of the deal said Smith signed Wednesday with Dallas. The person spoke to The Associated Press on condition of anonymity because the deal hadn't been announced. Smith posted a picture of himself signing a document on Instagram and wrote, “Life is good. I’m thankful. I’m blessed. I’m a Cowboy.”

Smith hasn't played in the NFL since 2015, when he was suspended for violating the league's substance-abuse policy while with the Oakland Raiders.

The Cowboys now have two suspended pass rushers under contract in Smith and Randy Gregory. It wasn't immediately clear where Smith stands in the reinstatement process. Gregory is seeking reinstatement.

The 30-year-old Smith had several legal issues as a player with San Francisco and Oakland. He was first suspended with the 49ers in 2014 before receiving a one-year ban in November 2015 with the Raiders.

Oakland retained Smith's contractual rights before releasing him in 2018 after San Francisco police issued a warrant for his arrest in a domestic violence case.

Smith applied for reinstatement to the NFL in 2016, but that decision was initially deferred until the offseason and he never was granted reinstatement.

Cowboys owner Jerry Jones has a history of trying to resurrect the careers of troubled defensive players, with mixed results. This time, Dallas is looking for pass rushing help after losing Robert Quinn to Chicago in free agency.

Linebacker Rolando McClain had a good year in 2014 after a trade before more substance-abuse suspensions. Defensive end Greg Hardy signed with Dallas as a free agent in 2015 following a domestic violence case in North Carolina, and that tumultuous season was Hardy's final year in the league.

Smith could be reunited with new Dallas defensive line coach Jim Tomsula, who was Smith's position coach during his first four seasons in the NFL with the 49ers.

Smith was drafted seventh overall out of Missouri in 2011. He had 19 1/2 sacks in his second NFL season and was an All-Pro while helping San Francisco reach the Super Bowl. He has 47 1/2 sacks in 59 career games.