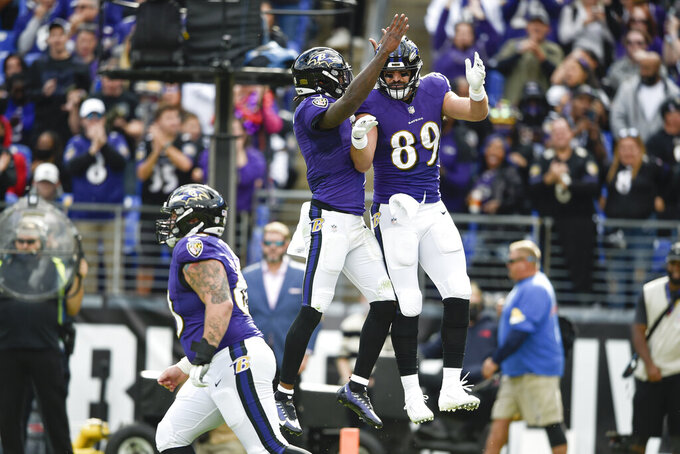 Baltimore Ravens tight end Mark Andrews (89) celebrates with quarterback Lamar Jackson, center, after they connected for a touchdown pass against the Los Angeles Chargers during the second half of an NFL football game, Sunday, Oct. 17, 2021, in Baltimore. (AP Photo/Gail Burton)

OWINGS MILLS, Md. (AP) — Mark Andrews takes a lot of pride in the position he plays. That was obvious when he was asked if he feels like a wide receiver trapped in a tight end's body.

And how is he planning on celebrating that particular holiday?

If Andrews indeed has a big game this weekend, that wouldn't be much of a change. The Baltimore standout has been one of the AFC's top pass catchers so far this season, helping Lamar Jackson and the Ravens overcome a slew of injuries en route to the conference's best record.

Andrews has 34 catches for 468 yards on the season, ranking in the top 10 in the AFC in both categories. His stats are remarkably similar to those of Travis Kelce, the reigning All-Pro at the position. Before the season, Andrews agreed to a four-year, $56 million contract extension, and since then he's shown just how important he is to this offense.

Pro Football Focus currently gives Andrews the highest offensive grade of any NFL tight end, ahead of Kelce, George Kittle, Rob Gronkowski and other big names — although as Andrews points out, there's a long way to go.

“There’s a lot of work left to be done. The job is not finished yet,” he said. “At the end of the day, there’s really only one thing that I care about, and that’s at the end of the season.”

The Ravens drafted Andrews in the third round in 2018, and before this season, he was already the first tight end in team history to have multiple seasons of at least 700 yards receiving and seven touchdown catches.

After getting his big extension, he had a quiet game in a season-opening loss at Las Vegas. Since then, Andrews has had at least five catches in every game — and Baltimore has won all five of them.

In a Monday night win over Indianapolis on Oct. 11, Andrews had 11 receptions for 147 yards, both career highs. He also caught two fourth-quarter touchdowns and two 2-point conversions, helping the Ravens force overtime. It was a memorable night on national television for Jackson and Andrews.

Jackson, Baltimore's star quarterback, said he could sense during the offseason that Andrews was ready for a big year.

“He was getting after it in Arizona when we were working out,” Jackson said. “He just wants to be the best, and that’s what you need out of your players. Your tight end — whatever position they play — you want the best out of them, and that’s what he’s shown.”

It's been particularly important for Andrews to be at his best because of all the pressure on Baltimore's passing game, which ranked last in the NFL last season. The Ravens drafted receiver Rashod Bateman and acquired receiver Sammy Watkins in an effort to give Jackson more help, but Bateman missed the first five games because of groin problems, and when he finally did play last weekend against the Chargers, Watkins was out with an injury.

Throw in injuries to running backs J.K. Dobbins and Gus Edwards, and the Ravens have needed Jackson to be productive throwing the ball — while relying significantly on the same top pass catchers as last season.

Jackson and Andrews have been up to the task. In fact, their connection looks even better in 2021.

“He understands this offense so well,” Andrews said of his quarterback. “He’s always had great ball placement and great eyes, but just the way he’s seeing the game, the game is progressing. It’s slowed down to him a bunch.”

NOTES: The Ravens got another TE back Wednesday when they designated Nick Boyle (knee) to return from injured reserve. He was on the field at practice. ... Coach John Harbaugh said T Brandon Knight, acquired from Dallas via waivers, made a “personal decision” not to report to the Ravens.