Barkley is not dreading playing where he hurt his knee 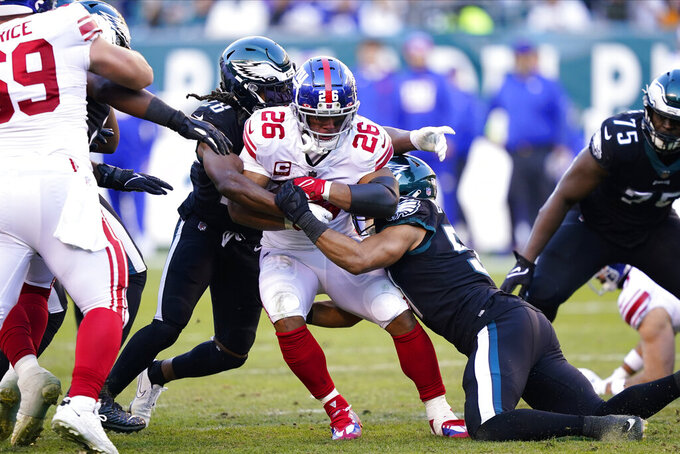 New York Giants' Saquon Barkley runs during the second half of an NFL football game against the Philadelphia Eagles, Sunday, Dec. 26, 2021, in Philadelphia. (AP Photo/Laurence Kesterson)

EAST RUTHERFORD, N.J. (AP) — Saquon Barkley isn't having any second thoughts about returning to Soldier Field for the first time since the New York Giants running back tore two ligaments in his right knee and missed almost all of last season.

Barkley and the Giants (4-11) will try to snap a four-game losing streak on Sunday when they face the Bears (5-10) in a game between teams already out of playoff contention.

The last time Barkley played in Chicago was on Sept. 20, 2020. He tore the ACL and MCL on a run that ended with Bears safety Eddie Jackson making what appeared to be a normal tackle near the sideline. It was not a big hit. Barkley's knee just gave out.

He had surgery more than a month later and spent the next 10 months rehabilitating his knee and getting ready for this season.

“No, I’m not thinking like, ‘I hate the field,’” Barkley said Wednesday after the Giants held a walk-though. “I’m excited that I’m healthy enough to be able to go out there and be able to play another game. Like I said, you never know when these opportunities are going to be taken away from you. That’s my whole mindset is cherish these last two games that we have and go out there and try to finish on a high note.”

While he has put in a lot of work to get back to football, Barkley has struggled to regain the form that made him one of the NFL's top running backs in his first two seasons. He was the NFL Offensive Rookie of the Year in 2018, when he was the No. 2 overall draft pick coming out of Penn State. He had 1,307 yards rushing and 2,028 yards from scrimmage.

This numbers are not even close this season's.

Barkley has carried 130 times for 461 yards and two touchdowns. He also has caught 38 passes for 244 yards and two more TDs. There are reasons.

The running back was not cleared to play in the season opener until days before the Sept. 12 game against Denver. Coach Joe Judge limited his workload early. Just as he was starting to show signs of being ready, he sprained an ankle against Dallas in Week 5 and missed the next four games.

It's turned into a season when all the effort might be the groundwork for a big season next year.

“Obviously, we know the season didn’t go the way that we would like it, but we only have two more opportunities left as a team," Barkley said. "Coach (Judge) kind of said it in our squad meeting today, you never know when your last opportunity is going to be, so you’ve got to try to take advantage of it.”

Barkley, recently taking off on Wednesdays to rest, shot down the idea that with nothing on the line for the Giants, he should be shut it down.

Barkley also explained his decision not to speak to the media after Sunday's 34-10 loss at Philadelphia. He said he needed treatment on his ankle and there wasn't enough time to talk with the team heading back to New Jersey right after the game.

For the final two games, all he wants is to see the players fight for each other and pick up a couple of wins.

NOTES: Judge declined to say whether Mike Glennon or Jake Fromm will start at quarterback this week. Fromm got his first NFL start Sunday and was lifted in the third quarter after going 6 of 17 for 25 yards with an interception. ... DT Dexter Lawrence was put on the reserve/COVID-19 list on Wednesday and has little chance of playing. ... DBs Adoree Jackson and Keion Crossen and WR John Ross were activated from the COVID-19 list. ... OT Nate Solder, DT Danny Shelton and DB Julian Love remain on the list, but have a shot at playing. ... The Giants designated LB Trent Harris for returning to practice.