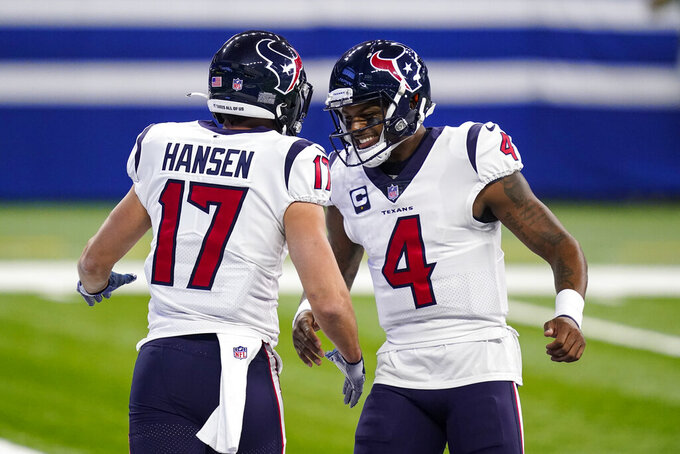 HOUSTON (AP) — Riding high from their shocking victory over the Pittsburgh Steelers on Monday night, the Cincinnati Bengals will attempt to win consecutive games for the first time this season when they visit the Houston Texans on Sunday.

The Bengals (3-10-1) were 14-point underdogs and had lost five in a row before toppling playoff-bound Pittsburgh 27-17 in prime time to snap a streak of 11 straight losses to the Steelers.

Now they’ll try to keep that momentum going as they look for their first road win against the struggling Texans (4-10), losers of three straight.

“Monday night was just a huge moment for all of us and our spirits,” Cincinnati defensive end Sam Hubbard said. “It was what we needed, to say the least. To come away with a win against a division rival on prime time just shows the world and gives us the confidence that we can play anybody and do what we need to do to get wins.”

Monday was Cincinnati’s first win since quarterback Joe Burrow, the first overall pick in this year’s draft, sustained a season-ending knee injury on Nov. 22. They got it behind the solid play of third-string QB Ryan Finley with Brandon Allen out with a knee injury.

It’s unclear if Finley or Allen will start against Houston.

“We will continue to see where the health is at before making those decisions, but I thought Ryan played a really tough, tough, gutsy effort on Monday night,” coach Zac Taylor said. “He took some big hits and was able to make some plays for us that helped us win that game.”

Things are much different in Houston where the Texans are trying to regroup after a second heartbreaking loss to the Colts in three weeks. In the first game against the Colts on Dec. 6, Houston had a chance to take the lead with about 90 seconds left with the ball at the Colts 2. But Deshaun Watson fumbled a low snap from center Nick Martin and Anthony Walker pounced on it to secure Indy’s 26-20 victory.

Last week, the Texans had a chance to tie it with 19 seconds left when wide receiver Keke Coutee grabbed a pass from Watson, but Darius Leonard knocked the ball out before he could cross the goal line. And again, the Colts recovered the fumble and it sealed their 27-20 win.

Interim coach Romeo Crennel was asked if he thought the last-minute loss to the Colts could bleed into this week and impact the team’s performance against the Bengals.

“Only if we let the tough loss bring us down,” he said. “You can look at it two ways. We fought and we played hard and we came up short. What I tell them is you’ve got to keep fighting. If you keep fighting hard enough and long enough then you’ll be able to win some of those games that we’ve come up short in. That’s what we’re going to try to do for two weeks.”

While there’s uncertainty at quarterback for the Bengals, the position is the most solid area of the team for the Texans where Watson has been one of the few bright spots in Houston’s dismal season.

Watson, who was selected to his third straight Pro Bowl this week, ranks second in the NFL with 4,134 yards passing and has thrown a career-high 27 touchdown passes. He threw for a season-high 373 yards on Sunday for his eighth 300-yard game this season and has thrown for 300 yards or more 18 times in his career, which ranks second in franchise history.

“Yeah, I’m tired of seeing that name on the back of the jersey every week we play,” Taylor said.

Taylor recalled his introduction to the elder Watt.

“The first time I faced him was my first game in the NFL coaching for the Dolphins,” Taylor said. “We opened at Houston and I think he deflected five passes, three of them got picked off. That was my first, ‘Welcome to the NFL’ coaching moment. He’s a tremendous player and you have have to be aware of him at all times.”

The three-time NFL Defensive Player of the Year has defended seven passes, has five sacks, 12 tackles for losses and returned an interception for a touchdown this season.

Bengals rookie receiver Tee Higgins is looking forward to catching up with Watson, a fellow former Clemson standout, after Sunday’s game. Higgins, who ranks third among rookies with 809 yards receiving, arrived at Clemson the year after Watson led the Tigers to a national title in the 2016 season.

Higgins got his own title at Clemson when he helped the Tigers to another championship in the 2018 season. He said he’s talked to Watson a couple of times, but hopes to get a picture with the quarterback this weekend.

“He went to Clemson, won a national championship for the first time in a long time,” Higgins said. “He’s definitely at the top of the mountain out there in Clemson.”

Cunningham is the second player in franchise history to have at least 80 tackles in each of his first four seasons and the fourth player to have 100 tackles in three straight seasons. He has seven games with 10 or more tackles this season to give him 19 in his career, which is tied for second most in team history.