Bieniemy, Saleh among minorities in running for top jobs 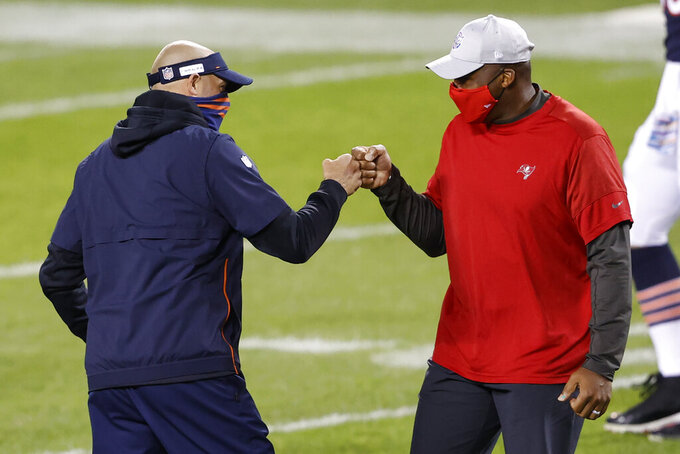 FILE - In this Oct. 8, 2020, file photo, Chicago Bears coach Matt Nagy, left, greets Tampa Bay Buccaneers defensive coordinator Todd Bowles before an NFL football game in Chicago. Bowles has long been regarded as one of the top defensive minds in the game. A Super Bowl champion as a safety in Washington, Bowles has spent the past two decades as a coach in the NFL, including a four-year stint as head coach with the Jets. (AP Photo/Kamil Krzaczynski, File)

One year ago, Eric Bieniemy and Robert Saleh missed out on the coaching carousel despite being coordinators of the two Super Bowl teams.

The Kansas City offensive coordinator and San Francisco defensive coordinator figure to be near the top of many of the lists of possible head coaching candidates again this offseason, when the NFL is hoping some new rules lead to more opportunities for minority coaches.

“I expect him to be a head coach next year because of what he’s able to do,” 49ers cornerback Richard Sherman said about Saleh. “He’s able to rally men. He’s a leader of men and that goes a long way.”

Currently, there are six minority head coaches out of the 32 jobs, with Atlanta’s Raheem Morris and Houston’s Romeo Crennel serving in the roles only on an interim basis. Only three minorities have gotten the 20 openings filled the past three offseasons.

Out of the four full-time minority head coaches, three have their teams in playoff contention, with Mike Tomlin having clinched a berth for Pittsburgh, Washington’s Ron Rivera and Miami’s Brian Flores in the running for spots.

The NFL recently expanded the Rooney Rule with a resolution calling for draft picks as a reward to organizations for developing minority coaches and front office executives who become head coaches, general managers or team presidents for other clubs.

There are several teams in addition to the Chiefs and 49ers who could get the reward.

Here’s a look at some of the top minority assistants who could become head coaches next season:

ERIC BIENIEMY: The offensive coordinator for the NFL’s most prolific offense over the past three seasons figures to be a top candidate for any team looking for an offensive mind to pair with a young quarterback. Bieniemy has worked side by side with coach Andy Reid, perhaps the most creative offensive coach, and has helped Patrick Mahomes develop into the best QB in the league.

Bieniemy has interviewed for head coaching jobs the past two offseasons without getting an offer. That could change this year.

ROBERT SALEH: The son of Lebanese immigrants, Saleh was a finalist last season in Cleveland for the job that ultimately went to Kevin Stefanski. Saleh is in his 16th season in the NFL, having worked in Houston, Seattle, Jacksonville and San Francisco.

While his background is heavy on the Seahawks Cover-3 defense, Saleh has shown an ability to adjust and tinker to his team’s strengths during his four years as coordinator in San Francisco. Known as a strong communicator and leader, Saleh helped put together one of the league’s top defenses last season on the way to the Super Bowl.

The results haven’t been quite as good this season, but the fact he pieced together a competent defense despite injuries to star edge rushers Nick Bosa and Dee Ford, as well as the entire starting secondary at times, shows he can thrive even without elite talent.

TODD BOWLES: The Tampa Bay coordinator has long been regarded as one of the top defensive minds in the game. A Super Bowl champion as a safety in Washington, Bowles has spent the past two decades as a coach in the NFL, including a four-year stint as head coach with the Jets.

Bowles is known for his aggressive style of blitzing and has worked under Bill Parcells in Dallas and Bruce Arians in both Arizona and Tampa Bay. He was selected the NFL’s top assistant in 2014 with the Cardinals and translated that into the Jets job. He won 10 games his first season before going 14-34 the next three years and being fired. Failing with an organization like the Jets isn’t disqualifying, but it could make Bowles more discerning about jobs this time around.

BYRON LEFTWICH: Tampa Bay’s coordinator on the other side of the ball could be a head coaching candidate as well as one of the few minorities with experience as a quarterbacks coach and offensive coordinator. A 10-year-pro as a quarterback, Leftwich got his coaching start as an intern with Arians in Arizona in 2016.

He worked with the team’s quarterbacks and became quarterbacks coach the following season. He’s had a quick rise, becoming interim offensive coordinator in 2018 and then offensive coordinator in Tampa Bay the following season. He has only four years as a coach at any level and has never held a head coaching job, but his experience as a player and working with veterans Carson Palmer and Tom Brady could make him an attractive candidate.

LESLIE FRAZIER: Like Bowles, Frazier could be a candidate for a second job after three-plus seasons as head coach in Minnesota. Frazier made the playoffs once with the Vikings. He returned to the defensive coordinator role after being fired following the 2013 season in Minnesota.

He spent two years in Tampa Bay and the last four in Buffalo, where he has helped run one of the league's most consistent defenses.

PATRICK GRAHAM: The Giants defensive coordinator began his NFL coaching career in New England in 2009 before moving around in recent years. He was the defensive coordinator in Miami last season under Brian Flores before taking the same job in New York on Joe Judge’s staff. He’s willing to adapt his scheme to the opponent and is a big reason the Giants are even in contention in the NFC East.

While the history of Bill Belichick disciples hasn’t been great, Flores’ success in Miami could work in Graham’s favor if there’s a team looking to go the defensive route this offseason.