With Brees back, Saints poised for big things 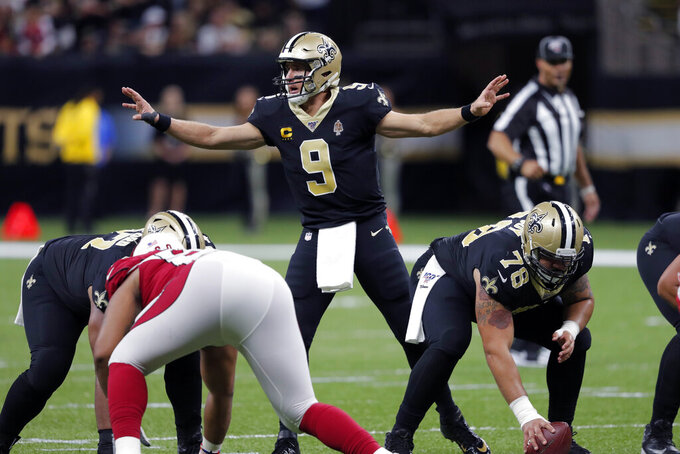 New Orleans Saints quarterback Drew Brees (9) calls out an audible from the line of scrimmage in the first half of an NFL football game against the Arizona Cardinals in New Orleans, Sunday, Oct. 27, 2019. (AP Photo/Bill Feig)

NEW ORLEANS (AP) — Drew Brees answered any questions about how effective he would be coming back from thumb surgery, and the New Orleans Saints posted another convincing victory despite the absences of star running back Alvin Kamara and top receiving tight end Jared Cook.

Now they have a bye to rest up before continuing their push toward the playoffs — although not everyone in the Saints locker room sees the midst of a six-game winning streak as an ideal time to for a break.

"I wish there wasn't a bye week so we could keep rolling," said Saints defensive end Cam Jordan, who had his eighth sack on Sunday. "The way we're playing right now, I just want to take the field with my guys again."

Brees can relate. He fast-tracked what was expected to be a six- to eight-week recovery from surgery on Sept. 18, even though New Orleans won five straight with backup Teddy Bridgewater filling in.

"I know the thought would be, 'Why don't you just wait until after the bye week? Everything seems to be going well, right? And why would you take the chance?'" Brees said. "I'm a football player. ... As soon as I could get back, I was going to get back. I didn't care about anything else."

Brees wound up being validated, as he often seems to be. He completed 34 of 43 passes for 373 yards and three touchdowns in a 31-9 triumph over an Arizona squad that came in on a three-game winning streak.

"He was sharp. I thought he located the ball well," Payton said Monday after reviewing video of the game. "He felt good and I don't think there was a hiccup relative to the decision to start him."

To some extent, Brees relied on No. 1 receiver Michael Thomas, who had 11 catches for 112 yards and a touchdown. But Brees also connected with eight other receivers.

Brees "sets expectations and the bar so high," Taysom Hill said. "It gives everyone a calming sensation that he's going to make us right."

Murray, now in his seventh season, never had a receiving touchdown in his first six seasons. In what was his second full game playing alongside Brees, he finally got one.

"It has been a long time coming," Murray said. "It was a special day, especially coming from a guy like Drew."

With the 40-year-old Brees back in form, and with the defense delivering a string of shut-down performances, New Orleans (7-1) looks poised for big things.

Brees sounds particularly optimistic about the prospects for this year's Saints, who are less than a full season removed from an infamous officiating mistake that might have cost them a trip to the Super Bowl.

"I feel like there are a lot of great moments ahead," Brees began. "But I'm going to really appreciate each and every one of them, one at a time, try to stay in the moment and really make the most of it."

The defense sacked Kyler Murray three times Sunday and held Arizona to 40 yards rushing. It has limited five straight opponents to 257 or fewer net yards and hasn't allowed a 100-yard rusher in 34 games, including playoffs.

While the defense has been exceptional overall, New Orleans has intercepted just three passes and ranks 24th in that category.

In two games serving as the No. 1 running back because of Kamara's injury, Murray has surpassed 100 yards rushing each time and totaled at least 150 yards from scrimmage while scoring two TDs in each game.

Wil Lutz, who has exhibited a strong, accurate leg for most of his three-and-a-half seasons with the Saints, has missed three of his last five field goal attempts.

The Saints did not have a single player knocked out of action against Arizona because of an injury. The question now is whether injured regulars such as Kamara, Cook, and receiver Tre'Quan Smith are ready after the bye.

62 — Total number of touches Murray has had rushing or receiving in New Orleans' past two victories.

The Saints' next four games are against NFC South foes, with two coming against the struggling Falcons, one against reeling Tampa Bay and one against Carolina. Further down the road is a clash of potential NFC title contenders when New Orleans hosts San Francisco.