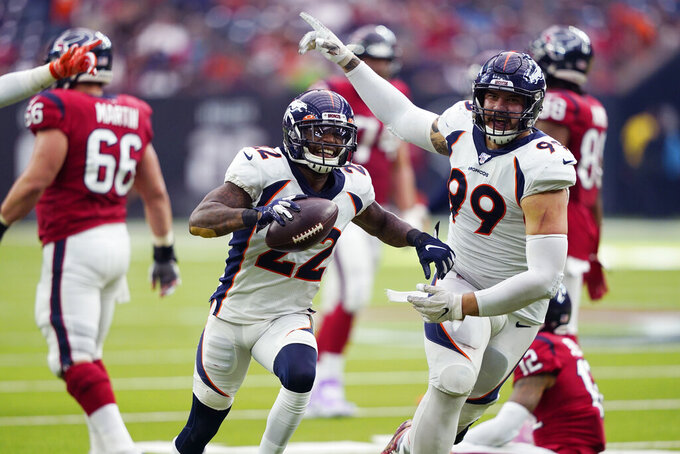 Denver Broncos strong safety Kareem Jackson (22) celebrates his interception against the Houston Texans during the second half of an NFL football game Sunday, Dec. 8, 2019, in Houston. (AP Photo/David J. Phillip)

Jackson was arrested Sept. 19 on suspicion of driving under the influence. He pleaded guilty Monday to one count of driving while alcohol impaired, according to the Denver district attorney's office. He was sentenced to 12 months of supervised probation, 24 hours of public service and participation with Mothers Against Drunk Driving's victim impact panel.

The Broncos said Jackson informed the team of his DUI arrest and that it was reported to the NFL. In a statement, the team said: “There are high standards for the personal conduct of all members of our organization, and we have expressed our extreme disappointment to Kareem for his poor judgment.”

The 31-year-old Jackson was suspended without pay.

Jackson posted an apology Tuesday on his Twitter account: “I would like to apologize to the Broncos organization, my teammates & fans. I understand the severity in my lapse of judgement and I will certainly not make this mistake again. I know I am fortunate to play in the NFL and am held to a high standard of professionalism and conduct.”

Jackson has two interceptions for a Broncos team that's ensured of a third straight losing season. They host Detroit on Sunday.