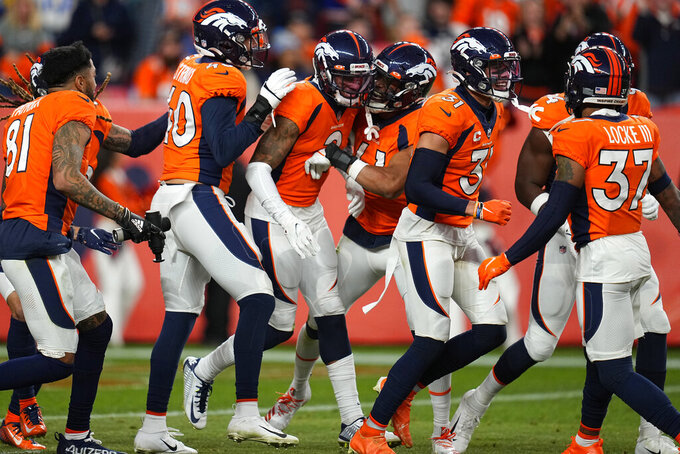 Denver Broncos cornerback Pat Surtain II (2) celebrates his interception with teammates during the second half of an NFL football game against the Los Angeles Chargers, Sunday, Nov. 28, 2021, in Denver. (AP Photo/Jack Dempsey)

DENVER (AP) — The Kansas City Chiefs see similarities in this year’s team to the one that won the Super Bowl two years ago. After a stumbling start they’re getting their health and mojo back and rolling into December.

They also see the rest of the AFC West closing in on them like Joey Bosa, Bradley Chubb and Maxx Crosby breathing down Patrick Mahomes’ neck.

Coming off a bye, the Chiefs (7-4) are riding a four-game winning streak, but the Denver Broncos, Los Angeles Chargers and Las Vegas Raiders are all just a game back at 6-5.

“The AFC is still wide open,” offered safety Derwin James Jr. after his Chargers lost 28-13 at Denver on Sunday. “We’re 6-5 right now and everyone in the AFC West pretty much has the same record as us. Everything we want is still there.”

Indeed, the Chiefs could be looking up at the Broncos next Sunday night if they lose to Denver for the first time since Sept. 17, 2015.

“No matter what happens, we’ve got to find a way to leave Arrowhead with a win,” safety Justin Simmons said after the Broncos rode rookie Pat Surtain II’s pair of interceptions to a pivotal win, their third in four games.

Denver’s victory Sunday means every team in the division has a winning record.

It also gave the Broncos hope of ending their long playoff drought despite losing four in a row in October, and seeing almost 10,000 empty seats at Empower Field at Mile High on Sunday coming off their lackluster performance against Philadelphia on the heels of a signature win at Dallas.

“The message before going into today’s game was like, ‘This is it. This is the season,’” Simmons said. “You hate to think about it like that, but if we don’t win today, our season is on the line. We’ve got to get a win.

“And I think that came out. Guys were playing with a lot of passion and energy. We’ve got to make sure we carry that over to next week. We can’t have a Dallas week. We had a good game at Dallas and we came back the next week and laid an egg against Philly.”

The Chiefs could still run away with the division like they’ve done before, but Kansas City has the toughest remaining schedule with opponents a combined 36-29-1.

They play each of their AFC West rivals in the next three weeks and finish up at Denver following games against the Steelers (5-5-1) at home and Bengals (7-4) on the road.

The Broncos’ remaining opponents are 33-32-1, but that’s only because winless Detroit (0-10-1) visits Denver in two weeks. Everybody else on their schedule has a winning record, including Cincinnati at home. And, like Kansas City, Denver has four divisional showdowns remaining.

The Chargers have two losing teams left to play: the Giants (4-7) at home and the Texans (2-9) on the road. They also visit Cincinnati and their opponents’ cumulative record is 32-34.

The Raiders have one losing team remaining, Washington (4-6) at home next week, before back-to-back games at Kansas City and Cleveland. Their opponents are a combined 35-32.

With starting tackles Garett Bolles (COVID-19) and Bobby Massie (ankle) out, they started Calvin Anderson and Cam Fleming against the Chargers, and Anderson (knee) had to be replaced by practice squad call-up Quinn Bailey shortly after Netane Muti went in for left guard Dalton Risner (back).

Rookie Quinn Meinerz was already starting at right guard due to injuries, so the Broncos had four backup linemen boring holes for the ground game and protecting quarterback Teddy Bridgewater — who left in the first half with a right shin injury and was replaced by an inefficient Drew Lock before returning for the second half.

Behind their patchwork line and ailing QB, the Broncos converted 8 of 11 third downs—their best third-down percentage in a single game since at least 1991 when the statistic was first tracked—and rumbled for 147 yards on the ground.

“I thought those guys did a great job,” Fangio said. ”... Unfortunately, we seem to have the patent on losing guys no matter how hard we try not to. I’m anticipating that the tide will turn at some point.”

Just like they’re expecting their luck to turn against the Chiefs, who’ve beaten then 11 consecutive times.

“Today wasn’t perfect,” Simmons said. “But, man, it mattered to guys out there today. It mattered to come find a way to win the football game, and ... whatever that was, that’s what we have to do from here on out.

“After tomorrow, this game is over. We’re not going to talk about it. The next time we’ll look at this is when we play the Chargers down the road. After tonight, we’re all in on the Chiefs, and we’ve got to find a way to leave Arrowhead with a win. I can’t emphasize that enough.”