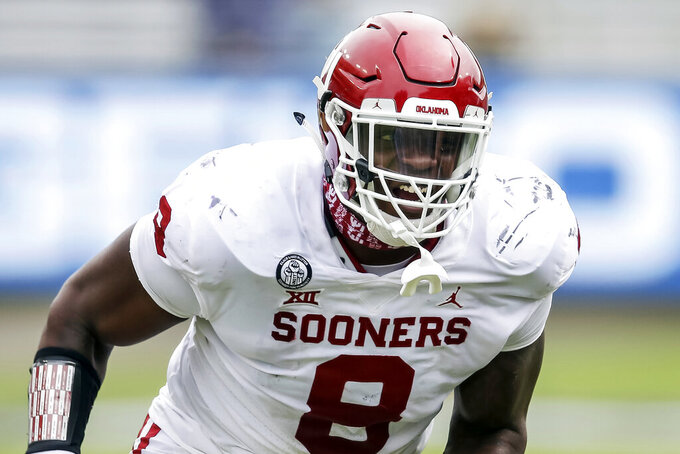 FILE - Oklahoma defensive lineman Perrion Winfrey (8) defends during an NCAA college football game against TCU, on Oct. 24, 2020, in Fort Worth, Texas. Lacking depth on the defensive line, the Browns took Oklahoma tackle Perrion Winfrey in the fourth round (No. 108). The 6-foot-4, 290-pounder spent two seasons with the Sooners after being rated the nation's top junior college player. (AP Photo/Brandon Wade, File)

BEREA, Ohio (AP) — Their worries about finding a franchise quarterback seemingly over, the Cleveland Browns were able to focus on filling other pressing needs in this year's NFL draft.

They checked all the boxes — minus one.

Browns general manager Andrew Berry, who made his big move last month by acquiring Deshaun Watson in a league-shaking trade, added four offensive players, four on defense and the best available kicker over the past three days.

Berry finished his third draft for Cleveland with a flurry on Saturday by making two deals and drafting six players — three from Oklahoma.

“I don’t think it necessarily even hit my brain at that time,” Berry said of the oddity in taking three Sooners, two with consecutive selections. "Just happens to be an interesting coincidence.”

Interesting. That's one way to put it.

After all, Cleveland's most famous Oklahoma product, Baker Mayfield, ended the weekend still on the Browns' roster and in limbo — a lost QB.

Mayfield's been on the trade block since Watson's shocking arrival, but the Browns have not been able to strike a deal and move the No. 1 overall pick in 2018. There seemed to be momentum for a possible swap with Carolina on Friday, but those talks bogged down — reportedly over how much of Mayfield's $18.8 contract the Browns would pay — and the Panthers moved up and selected Mississippi quarterback Matt Corral.

Pressed about a situation growing more awkward, Berry continued to say things with Mayfield are “fluid.”

The Browns might have to wait for a shift in the quarterback market before they can move on from Mayfield.

"It’s fluid and we’ll deal with it as circumstances change accordingly,” Berry said.

Lacking depth on the defensive front, the Browns started Saturday by taking Oklahoma tackle Perrion Winfrey (No. 108) in the fourth round. Then, after trading down for the second time, Berry selected LSU kicker Cade York (No. 124) .

The Browns added Cincinnati running back Jerome Ford (No. 156) in the fifth round before taking Oklahoma receiver Michael Woods II (No. 202) in the sixth.

The puzzling selection of cornerback Martin Emerson in Friday's third round made more sense as the Browns traded nickel back Troy Hill to the Los Angeles Rams for a fifth-round pick in 2023.

The 30-year-old Hill signed a two-year, $9 million deal with Cleveland as a free agent last year. Hill was with the Rams before joining the Browns.

York was at his best in the biggest moments at LSU, and the Browns are counting on him to be just as clutch.

The former soccer player went 15 of 19 on field-goal attempts beyond 50 yards, nailing a school record 57-yarder in 2020 against Florida in a game played in dense fog. It's the one pro scouts were most interested in.

“That probably was my most prolific kick in college,” York said. "I was definitely asked about that multiple times.”

“Realized that is a little high for where kickers typically go,” Berry said. "But we do think that he is an excellent prospect and has a good chance to be a good kicker for a long time.”

Winfrey made quite a first impression during an energetic Zoom call with the media.

Wearing a shirt adorned with sketches of Doberman Pinschers, Winfrey barked several times, quickly endearing himself to Cleveland's “Dawg Pound” while promising to bring a fiery passion to his new team.

"A dawg mentality,” Winfrey shouted. “I am coming in to kill right away with my boys. I am lined up next to Myles Garrett, the best defensive end in the game. We are fixing to take this over. It's over with. I am telling you, it's over with.”

Pacing as he spoke on the phone, Winfrey was asked about his boundless energy.

Before transferring to Cincinnati, Ford started at Alabama, which pulled out a few stops to make its recruiting pitch.

“Coach (Nick) Saban landed a helicopter on the 50-yard line at my high school,” he said with a chuckle.

Ford's excited to join one of the NFL's most talented running back rooms with Nick Chubb and Kareem Hunt. The 22-year-old believes he adds another element.