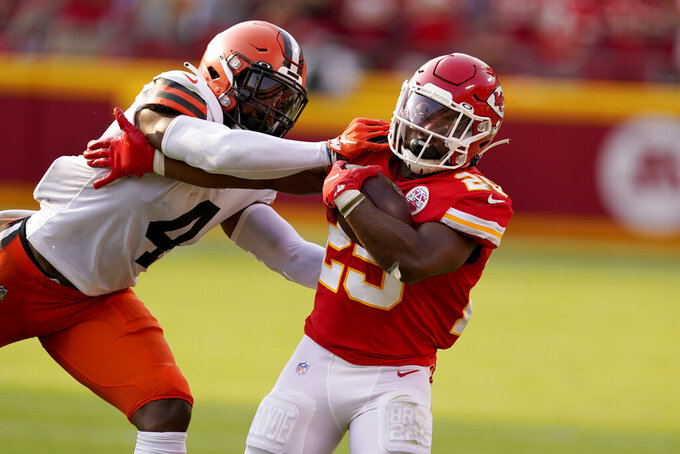 BEREA, Ohio (AP) — The Browns will be down a key defensive player for Sunday's home opener and maybe an offensive starter as well.

Starting linebacker Anthony Walker Jr. was placed on injured reserve Friday and will miss at least three games with a hamstring injury, a loss that will have a ripple effect through Cleveland's defense.

Walker, who signed as a free agent in March after four seasons with Indianapolis, got hurt during Thursday's practice. He led Cleveland with nine tackles in last week's 33-29 loss to the Kansas City Chiefs and he's also the Browns' signal-caller on defense.

“He’s definitely a big piece for us on the defense,” said 2020 All-Pro end Myles Garrett. “He’s great at getting the calls out, getting it to us quick, making sure we’re lined up in the right spot. He’s just a hell of a player in general.”

Any player going on IR must sit out a minimum of three games before he can be activated. Walker watched Friday's practice from the side as the Browns (0-1) continued to get ready for the Texans (1-0).

Mack Wilson would seem to be the most likely candidate to take over for Walker. Cleveland also has Malcolm Smith and Elijah Lee as potential replacements.

Stefanski would not disclose who will handle the defensive calls. Safety John Johnson III seems a likely choice because he's in on all packages.

Garrett feels others will step up in Walker's absence.

“Knowing how deep the linebacker room is, I’m confident they’ll be able to step up and make big plays for us,” Garrett said. "At the end of the day if we need to get lined up, us D-line, we can take care of it ourselves.

“That’s what we’ve been harping on each other all this week. Don’t have to rely on the linebackers, they’re a luxury, they’re not a necessity.”

On the offensive side, starting left tackle Jedrick Wills Jr., also missed practice and is listed as questionable (a 50/50 chance of playing) for Sunday with an ankle injury sustained in the first quarter last week.

Wills did not practice this week, but Stefanski said there's a possibility the No. 10 overall draft pick last year could play.

"We’ll see how it goes over the next few hours to see how Jed responds, and then if he can’t make it to the game, we have a plan,” Stefanski said.

Complicating matters is that Wills' backup, the versatile Chris Hubbard (triceps), is out.

With Wills and Hubbard sidelined, the Browns could start either rookie James Hudson III, a fourth-round pick from Cincinnati, or Blake Hance. When Wills got hurt early in the Jan. 17 playoff loss at Kansas City, Hance, who usually plays guard, did a solid job filling in.

Stefanski would not disclose his starter if Wills is sidelined.

Center JC Tretter (ankle) returned to practice after being held out for two days.

Stefanski said safety Grant Delpit will make his NFL debut. A second-round pick in 2020, Delpit miss his rookie year with a ruptured Achilles tendon. He sat out against the Chiefs with a hamstring injury.

“We brought him back on a pitch count throughout the week and then did more and more and did a nice job,” Stefanski said. “He’s locked in mentally, and looking forward to getting him out there.”

NOTES: Punter Jamie Gillan took accountability for his pivotal dropped snap in the fourth quarter last week at Kansas City. “I just dropped it. Massive mistake. I cost that game,” said Gillan, who added the experience will make him better. “Things happen. And that hasn’t changed my outlook in practice or anything. I’m still this happy-go-lucky-likes-a-pint-or-two person. ... I can’t punt the ball without catching it, so I better catch it next time.”... Stefanski said teams received a memo from the NFL about sideline comportment in the wake of safety Ronnie Harrison's ejection for shoving Chiefs assistant coach Greg Lewis. Before he reacted, Harrison was pushed by Lewis.