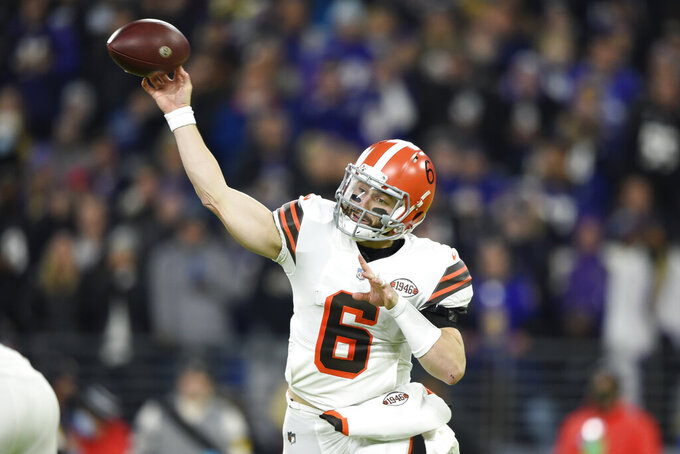 Cleveland Browns quarterback Baker Mayfield throws a pass against the Baltimore Ravens during the first half of an NFL football game, Sunday, Nov. 28, 2021, in Baltimore. (AP Photo/Gail Burton)

BEREA, Ohio (AP) — Baker Mayfield's bruises aren't as black and blue as they were before the late, but much-needed bye.

The Browns' record is still shaded in mediocrity.

The one-week break gave Cleveland's quarterback a chance to heal and recoup from a 12-game battering and mentally prepare himself for a grueling five-game finish to maybe save the season and cement his future with the Browns.

The Browns (6-6) are facing a win-or-else situation on Sunday when they host the AFC North-leading Baltimore Ravens (8-4) in the second matchup between the rivals in three weeks. The scheduling oddity fits right in with his quirky season in which they have yet to separate from the pack.

A win would move the Browns within a game of the division lead, and closer to a wild-card spot.

A loss could push their playoff hopes past the perilous stage.

“Everything that we can accomplish is still in front of us so if we handle it correctly, that will happen,” Mayfield said. "“I feel confident where I’m at, where we’re at and where we’re headed.”

During the time away, Mayfield relaxed for a few days in Arizona before visiting family in Austin, Texas. It was a welcomed chance for his body to recover after playing with a torn labrum and fractured humorous bone in his left shoulder, a bruised right knee and left heel and groin issue.

“Quite a bit, to be honest with you,” Mayfield said when asked what the week did for him physically. "I haven’t had any major setbacks the past few weeks, and I had another week off so I’m looking forward to keep getting better as the weeks go on.”

The Browns are counting on Mayfield to be at his best in the season's biggest games.

Last week, general manager Andrew Berry seemed to issue a simultaneous vote of confidence and challenge to Mayfield, saying he expected the QB to shine down the stretch against Baltimore, Las Vegas, Green Bay, Pittsburgh and Cincinnati — all teams in the playoff picture.

Never one to back down, Mayfield shares Berry's optimism.

“Anytime you can kind of step back, re-evaluate everything, come back with a fresh mindset and realize where we are right now and just have that one-week-at-a-time mentality,” he said. That is where our heads are, and that is where I play my best.”

"Everyone in this building believes in him,” Hooper said. “No matter where you stand with anything, anybody, you can’t ever question Bake’s toughness, and for him to have a week to just heal up alone is huge.

The Browns stumbled into their bye following a 16-10 loss at Baltimore. It was especially stinging since Cleveland intercepted Ravens quarterback Lamar Jackson four times and couldn't capitalize.

Maybe there was more to it.

Given their maddening inconsistency and bouts of ineptitude, the Browns are fortunate to still have a shot at the postseason. They've played well in spurts, just not enough of them. They've also been penalty prone and predictable.

The bye week afforded coach Kevin Stefanski and his staff some time to tinker with things, and there was a focus on jump-starting an offense that has scored 17 points just once in the past six games.

Stefanski wouldn't reveal any schematic changes, but signs point toward a personnel swap on the line, where backup right tackle Blake Hance has struggled filling in for All-Pro Jack Conklin.

Also, with tight end David Njoku currently on the COVID-19 reserve list, Stefanski may not be able to use as many “13 personnel” packages — one running back, three tight ends, one wide receiver — as he likes.

The Ravens stacked the line of scrimmage two weeks ago, daring the Browns to throw while holding Cleveland to a season-low 40 yards rushing.

"We have to put together a game plan that can account for those types of things and go make a big play,” Stefanski said. “There should, in theory, be some grass opened up in the defensive secondary.”

However Baltimore decides to attack or defend this time is irrelevant to Stefanski.

NOTES: WRs Jarvis Landry (knee) and Anthony Schwartz (concussion), DT Malik Jackson (knee) and TE Harrison Bryant (ankle) missed practice. Stefanski ruled Bryant out for Sunday. ... The loss of Ravens star CB Marlon Humphrey, who suffered a torn chest muscle, should help Cleveland's chances. “He's a key piece, a great player,” Stefanski said. “You hate to see that for them. Does it change them? I think it remains to be seen.”