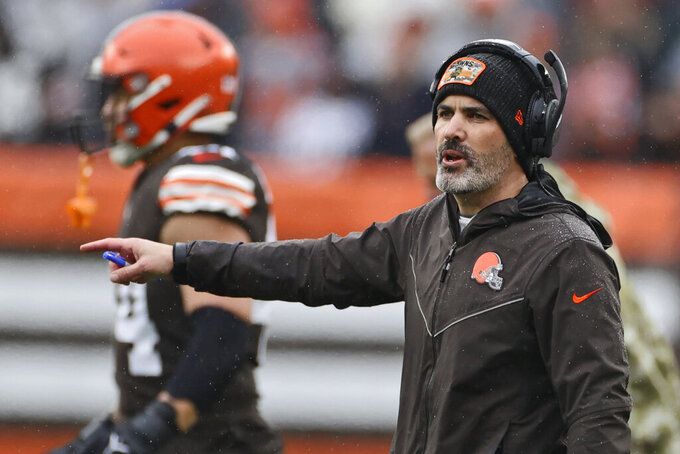 CLEVELAND (AP) — Rested and hopefully refocused, the Browns capped their bye week by getting a small boost to their playoff chances in a cluttered, chaotic conference race.

Now, it's time to help themselves.

Although Cleveland slipped back into last place in the AFC North without playing on Sunday, losses by Baltimore, Cincinnati, Las Vegas and Denver — all playoff contenders — helped the enigmatic Browns (6-6), who can still salvage their season after not meeting expectations.

“We still haven’t played our best ball yet,” linebacker Anthony Walker said Monday. "We all know that. And to say we’re still in the mix, it definitely makes coming into practice a little bit more worth it.

"We understand that everything we had, all the goals we had to start the season, are still out in front of us. We just gotta take care of business.”

With five games left, the Browns have the slimmest of margins for error in order to have any shot at making the postseason for the second straight year.

They're also facing a rugged path to the playoffs with three division games, including a matchup Sunday against the first-place Ravens (8-4), who overcame four interceptions by Lamar Jackson to beat the Browns 16-10 a week ago.

Things could be better. They could also be bleaker.

“Right now, we have to just focus on ourselves,” running back Kareem Hunt said. "We still have to win. It doesn't matter what other teams are doing if we don't come out and win.”

Last week, coach Kevin Stefanski and his staff undertook a deep dive into addressing numerous issues, with the Browns' ineffective passing game at the top of the need-to-fix list.

While quarterback Baker Mayfield has struggled partly because of injuries, the Browns haven't moved the ball through the air nearly as well as expected, and their inability to stretch the field has made Cleveland easier to defend.

Stop the run. Stop the Browns.

Stefanski didn't divulge any specifics in terms of potentially jump-starting his offense, but indicated one option could be playing Hunt and Nick Chubb together.

It would seem like a natural move. However, the Browns have preferred rotating the backs to keep them as fresh as possible. Now that Hunt is back after missing five games with a calf injury, and with every game so meaningful, it's possible Stefanski could use the playmakers in some packages.

“I do think it's something you can do in this system and really any system in terms of plugging in those guys,” Stefanski said. "We just want to be mindful and intentional about why and what we are doing.

"If you do something like that, you want to have a good reason to do it and put those guys in position to succeed.”

At this point, the reason is winning.

Hunt would be all for it, and doesn't see any downside in he and Chubb in the same backfield.

“I would love it, but that's up to them,” Hunt said. "Whatever the coaches decide. If they decide to put us both out there, I'm ready for that. And if not, that's fine. I feel like we still will be fine. The cons, there really are none. It's only pros, I think. It could be a good thing.”

On Sunday, the Browns got in some extra TV scouting of Baltimore, which was a missed 2-point conversion from beating Pittsburgh and opening a three-game lead on Cleveland in the division.

The Ravens missed their chance. The Browns can't miss theirs.

Cleveland's recent game plan against Jackson was exquisite, but still not enough as Jackson overcame his mistakes by making enough plays to avoid a loss. He nearly did it again to the Steelers.

“He's able to put his team in position after what we would say is a not-so great game by him, but still to have a chance at the end to win the game,” Walker said. "That's what we have to do. We have to find a way to win.

"I'm pretty sure Pitt would have taken a 3-0 win or however they got it done. We have to find a way to do the same thing.”

NOTES: Second-year LB Jacob Phillips could return this week after missing the first 12 games with a biceps injury sustained in training camp. Phillips would be a big boost for a unit that's had its share of issues. ... Stefanski said steady long snapper Charley Hughlett has made progress after being placed on the reserve/COVID-19 list last week. LB Mack Wilson would handle snapping if Hughlett is out.