Burrow says ankle is OK after injuring it at Steelers 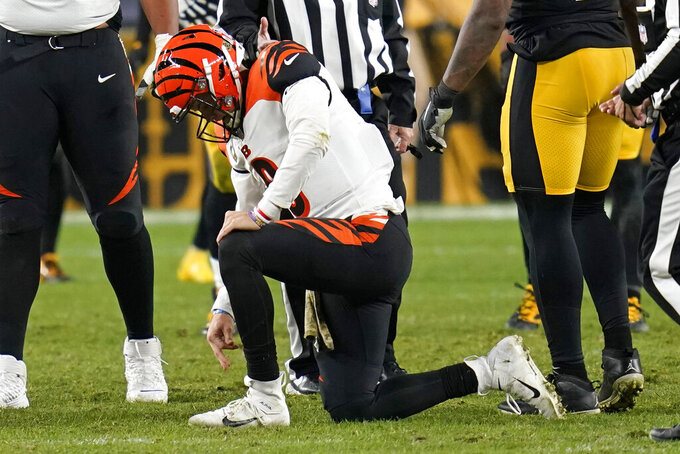 Cincinnati Bengals quarterback Joe Burrow (9) gets up slowly after being sacked by Pittsburgh Steelers outside linebacker T.J. Watt (90) during the second half of an NFL football game, Sunday, Nov. 15, 2020, in Pittsburgh. (AP Photo/Keith Srakocic)

COLUMBUS, Ohio (AP) — Cincinnati Bengals quarterback Joe Burrow said he's not having any trouble with the minor ankle injury he suffered last week and expects to start in Washington on Sunday.

Burrow said he “rolled his ankle” when Steelers linebacker Bud Dupree gave the scrambling rookie a little extra shove after chasing him out of bounds near the end of the first half. The push knocked Burrow off balance, and he tumbled into the Cincinnati bench before limping back onto the field.

Dupree wasn't penalized, despite the protestations of Cincinnati coach Zac Taylor. Burrow was limping again later in the game, but didn't miss a snap in the 36-10 loss.

“No, I'm good to go,” Burrow said Wednesday when asked if there were any residual effects.

The Bengals (2-6-1) travel to play Washington (2-7) where Burrow will be trying to stay out of the way of rookie defensive end Chase Young, who was Burrow's former teammate at Ohio State and the No. 2 overall draft pick behind the quarterback last spring.

The Bengals, whose offensive line and secondary have been plagued with injuries, appeared to be getting a little healthier overall this week.

Taylor said he expected cornerbacks LeShaun Sims and Mackensie Alexander — both recovering from concussions — and offensive tackles Bobby Hart (knee) and Jonah Williams (neck) to be active at practice this week, but whether any of them will play Sunday remains to be seen.

Running back Joe Mixon, who has missed the past three games with a foot injury, is making progress but remains day to day, Taylor said.