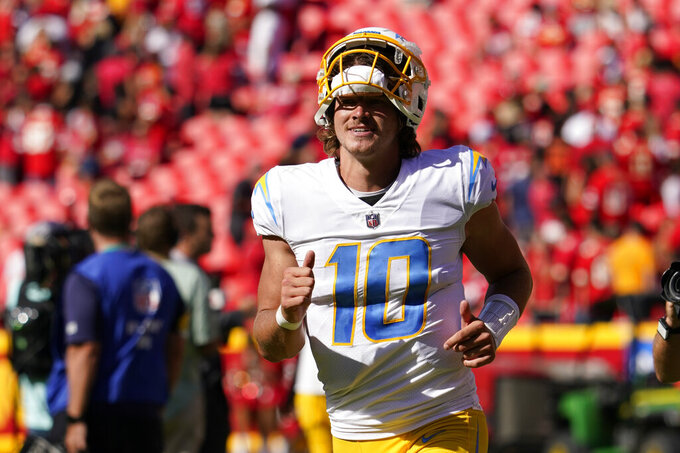 LOS ANGELES (AP) — Derek Carr and Justin Herbert have shown a flare for late comebacks during the first three weeks of the season. It is likely one of them will be called upon again when the Las Vegas Raiders visit the Los Angeles Chargers on Monday night.

Carr and the Raiders are off to their first 3-0 start since 2002, when they last went to the Super Bowl, with two of the wins coming in overtime. Las Vegas is the fourth team to win twice in OT in the first three weeks.

The 2-1 Chargers' victories have been the result of Herbert directing winning drives in the final 15 minutes.

Carr leads the league with 1,203 passing yards, with each of his six touchdown passes going to a different receiver. He has passed for at least 325 yards in five straight games dating back to last season.

Carr also has one of the deeper receiving groups in the league. Four players have at least 200 yards, the first time in NFL history that has happened through the first three games.

Darren Waller is tied for the AFC lead among tight ends with 20 receptions and Henry Ruggs III is averaging 21.5 yards per catch.

“Derek is operating at an extremely high level,” Chargers coach Brandon Staley said. “They have really surrounded him with a complete offense. They have weapons in all areas.”

Herbert is fourth in the league with 956 passing yards and has quickly taken to the offensive scheme implemented by coordinator Joe Lombardi. Keenan Allen and Mike Williams are one of two duos to have at least 250 receiving yards. Williams, who has emerged as Herbert's favorite target in the short passing game, has caught a TD in four straight games.

“It’s hard to just unleash the rush on this guy because they allow him to scramble and he will hurt you bad," Raiders coach Jon Gruden said of Herbert. “If you don’t protect the pocket and you have a lot of coverage down the field against Williams and Keenan and all of their weapons, this guy will put the ball down and he will really hurt you bad. We got hurt last week with some scramble plays, so we got to really be careful with our rush.”

Both of last year's games came down to the final play, with each team winning on the road. The Raiders got a 31-26 victory when replay reversed Herbert's 4-yard touchdown pass to Donald Parham. Herbert got revenge later in the season when he sneaked in from a yard out in overtime to win 30-27.

HOME AWAY FROM HOME

Monday night's game is at the Chargers' new Hollywood Park abode, but it could sound like a Raiders home game because Los Angeles remains home to a lot of Raiders fans. The Chargers' first home game in front of fans two weeks ago against Dallas saw Cowboys fans outnumber Chargers fans by at least a 6-to-1 margin.

After targeting tight end Waller 19 times in the opener, Raiders QB Derek Carr has done a good job spreading the ball around the past two weeks. Young receivers Henry Ruggs III, Bryan Edwards and Hunter Renfrow have all made big plays. Those four are the pass catchers over 200 yards receiving.

The Raiders have made a big leap defensively early this season with help from a few former Chargers. Coordinator Gus Bradley’s system has allowed the Raiders to play faster and get pressure consistently without blitzing to neutralize opposing offenses. Linebacker Denzel Perryman has solidified the middle of the defense and leads the team with 36 tackles. Cornerback Casey Hayward has bounced back from a down 2020 with the Chargers to shut down opposing receivers, allowing only three catches the first three weeks.

ROOKIES ON THE CORNER

Among the six rookie cornerbacks that have played 100 or more snaps, Los Angeles' Asante Samuel Jr. and Las Vegas' Nate Hobbs are the only ones who have not allowed a touchdown.

Samuel Jr. was selected the NFL Defensive Rookie of the Month for September after picking off passes in the past two games. The second-round pick is the second player drafted after the first round to get multiple picks in September before turning 22 years old since 1982.

Hobbs and Samuel Jr. have both been targeted 12 times through three games.