Carroll says Seahawks were in contact with Clowney till end 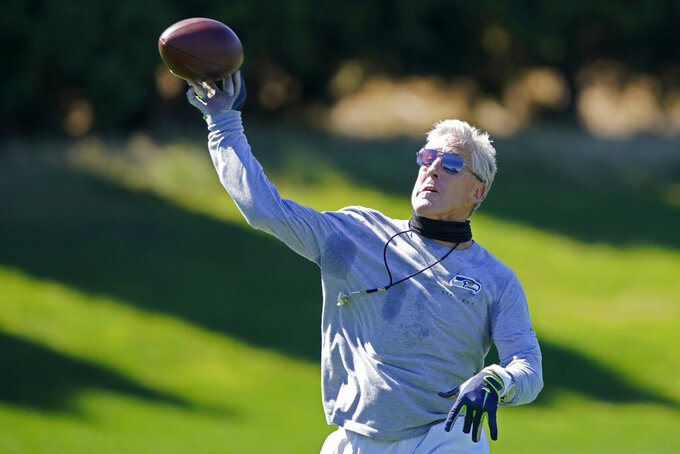 RENTON, Wash. (AP) — Pete Carroll said Monday he remained in contact with Jadeveon Clowney throughout the offseason and the Seattle Seahawks were in on conversations through last weekend before the defensive end signed with Tennessee.

“I talked to him throughout the process and stayed with him. We had really good, amicable conversations about things and he was just waiting the whole time,” Carroll said. “He had his sights set really high to start with and it just put him in a situation where he had to wait it out and he didn’t get near the amount that he wanted as it turned out. Our offers and stuff early on didn’t look attractive to him because he had his mindset elsewhere.”

Ultimately, Clowney’s decision to sign elsewhere leaves the defensive line and specifically the pass rush as one of Seattle’s biggest questions going into the season opener at Atlanta.

But Carroll feels comfortable with what the Seahawks did and how the options in the pass rush looked during training camp.

“The early season will tell us,” Carroll said. “We need to get them on file and see what it looks like.”

One spot that could be unsettled, or at least a rotation initially, is cornerback. Quinton Dunbar was the presumed starter, but was away from the team late last week for a funeral and was unable to practice on Monday having not cleared testing protocols. Carroll expects Dunbar back on Wednesday, but his brief absence could lead to Tre Flowers getting a bigger role in the opener.

“Tre came back with a level of confidence and two years behind him here that he’s benefited from,” Carroll said. “He had a really good camp, was the best he’s been and did a nice job.”

Carroll also said the Seahawks expect Phillip Dorsett to be able to play against the Falcons despite being slowed by a foot problem that has limited his participation in practice the past couple of weeks.

NOTES: Seattle placed OL Phil Haynes on injured reserve due to a hip injury and signed FB Nick Bellore to the active roster. ... Carroll said newly added LB D’Andre Walker is an option at strongside linebacker and as an addition to the pass rush. Walker was claimed off waivers from Tennessee.