Carroll wants Seahawks to recommit to identity moving ahead 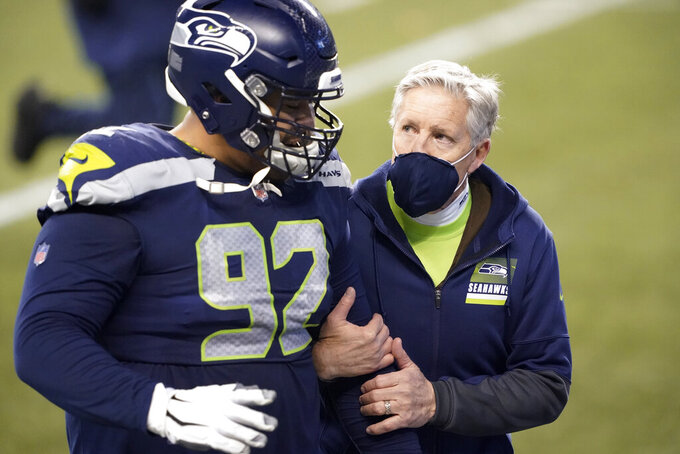 SEATTLE (AP) — Pete Carroll will always believe in the style of play that has made the Seattle Seahawks one of the top franchises over the past decade.

The way this season finished for the Seahawks with their 30-20 loss to the Los Angeles Rams in the opening round of the playoffs only reinforced those beliefs for Carroll.

In his view, the Seahawks lost some of those principles at times despite going 12-4 and winning their first division title in four years. And despite all the numbers Russell Wilson, DK Metcalf and others posted, Carroll believes getting away from some of those core values, especially on offense, ended up costing his team.

“We have to run the ball better, and not even better, we have to run it more,” Carroll said on Monday. “We have to dictate what’s going on with the people that we’re playing and that’s one of the ways to do that. I know the fans aren’t real jacked on hearing that, but Russ knows it, too. We need to be able to knock those guys into the scheme that we want to throw at.”

Wilson might have thrown 40 TD passes in the regular season and Metcalf might have set a franchise record for yards receiving, but for the second time in three years Seattle failed to advance past the wild-card round.

The playoff matchup against their troublesome division foe certainly didn’t help the Seahawks, but the loss to the Rams only exasperated offensive problems that developed the second half of the season. Sans one game against the weak New York Jets, the Seahawks' offense was a disjointed struggle. The Rams laid the blueprint in November of playing two safeties deep and not giving up the deep ball as a way to slow Seattle’s offense. Others replicated — most notably the Giants — and Seattle struggled to make the appropriate adjustments.

It leads to an offseason in which Seattle must contend again with what its identity should be on offense.

“Early in the season we were able to get the deep shots and stuff like that early on,” Wilson said. “I think our tempo, our pace and stuff, getting in and out and all that, we kind of lost that a little bit, I think, along the way.”

One aspect of Seattle’s turnaround on defense that Carroll would like to carry into next season was the emergence of an impactful pass rush. The Seahawks had 37 sacks over the final 10 games of the regular season and had three more against the Rams. The arrival of Carlos Dunlap was a big key, as was the continued use of Jamal Adams as a pass rusher. Dunlap and Adams pressuring mostly off the edge also allowed for Jarran Reed to get better push up the middle.

“I feel like I got a lot of ball left and I would like to finish it up with an organization like this,” Dunlap said. “My two goals are still a Super Bowl and 100 sacks and I have not accomplished either one of them.”

The Seahawks have a very significant list of free agents and some players under contract either looking for extensions. Some likely will be asked to rework their current deals with uncertainty about the salary cap.

Leading the list of free agents are RB Chris Carson, CB Shaquill Griffin and LB K.J. Wright. When healthy, Carson is the style of running back Seattle wants, but he has yet to play a full season and missed four games in 2020.

Griffin has been Seattle’s starting cornerback since arriving in 2017 and Wright is the most-tenured player on the roster, coming off one of the best seasons of his career in Year 10.

Those free agents will need to be balanced against an offseason in which Adams will be in the final year of his rookie deal and likely seeking an extension. How to manage Dunlap’s salary cap hit of $14.1 million in 2021 is an issue.

Adams will be the most notable player needing offseason surgery. Adams played with a torn labrum in his left shoulder, and will also have surgery to repair finger injuries.

Safety Marquise Blair should be ready for training camp after suffering a torn ACL early in the season, but veteran pass rusher Bruce Irvin needed a second surgery on his knee following a torn ACL and his timetable has been pushed back, Carroll said.

Considering what other teams faced, Seattle seemed to pull off a remarkable accomplishment finishing the season without a player going on the reserve/COVID-19 list due to a confirmed positive test. Seattle had a few players put on the list due to close contacts and defensive end Jonathan Bullard went on the list last week, but Carroll said that was confirmed to be a false positive.

“It’s just plain diligence. Every day, everything you’re doing,” Carroll said. “It doesn’t change when you go home, doesn’t change for our people in our community. That’s the only way you can get this done.”