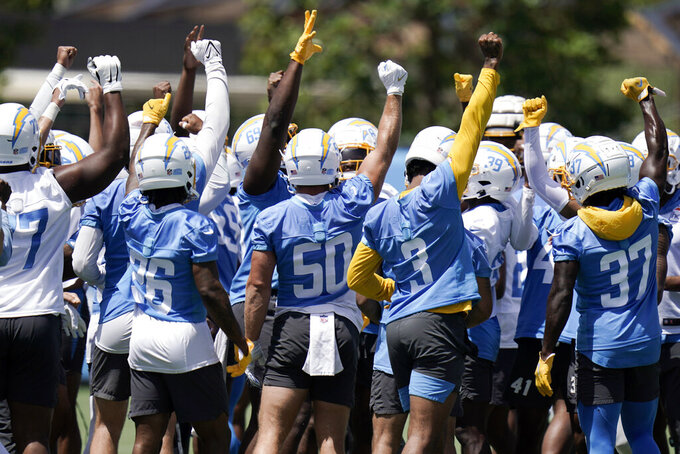 Even though the Chargers have the next six weeks off before reporting for training camp, Herbert will use that time as more of a working vacation.

“I think the great thing about football for me is I need football. I love waking up and going to work and lifting, running, throwing and watching film,” Herbert said. “I think too much off time can kind of be a burden to me sometimes, so I always look forward to having stuff to do.

“I feel like I just get bored sometimes without football. Saturdays and Sundays are nice, but at the same time, I’d rather be playing and having something to do because I hate hanging around my house and not doing or accomplishing anything.”

While the defense spent the past couple of months getting new players acclimated, Herbert and the offense didn't have as many challenges. First-round pick Zion Johnson was the unit's biggest offseason addition as he is expected to start at right guard when the season opens on Sept. 11 against the Las Vegas Raiders.

Herbert — who threw for 5,014 yards and 38 touchdowns en route to making the Pro Bowl last season — said the biggest benefit of the offseason workouts was getting to do drills in seven-on-seven situations, which is something they didn't get a chance to do last year because of COVID-19 restrictions and while trying to learn a new offense.

“We covered plenty of topics. I feel like we’re miles ahead of where we were last year at this point. So it’s up to us to just keep getting better,” Herbert said.

The fact that the focus was almost entirely on football was perfect for coach Brandon Staley.

After generating plenty of headlines with their March signings in free agency, the Chargers were mostly under the radar during their offseason program.

That's fine for Staley and company as they hope to have everyone's attention late in the season as they attempt to make the playoffs for the first time since 2018 after going 9-8 last season.

Staley was not only pleased with the perfect attendance the past two days, but also that almost all of his notable players had been in the complex for at least the past three weeks, with most being there since the program began on April 18.

“They have the hardest job in the organization. They have the most at stake, so I want our players to always have that energy to come in to work and be excited to compete," Staley said. "We’ve brought in a bunch of guys that really like playing ball and like doing all the hard parts of football. It’s been exciting to join up with this group, for sure.”

Linebacker Joey Bosa, who usually didn't report until the mandatory minicamp, was in attendance for most of the organized team practices the final three weeks.

“I was hesitant a little bit, but being out here, it’s great to be around everybody,” Bosa said. "It’s just tough when you’re in a routine all the way across the country to throw yourself out of that and make that flight, but it’s been a great couple of weeks. Definitely, for years to come, I’ll make it out here a week or two early because it’s a good acclimation period, for sure.”