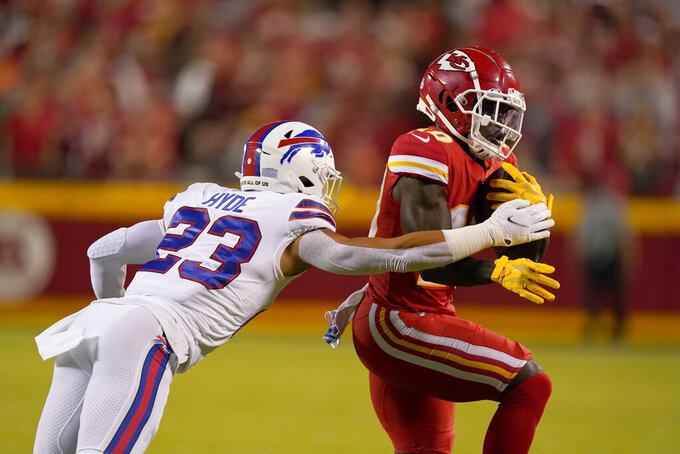 Hill was out with a bruised quadriceps that he sustained in Sunday night's blowout loss to the Bills, when the Chiefs also lost running back Clyde Edwards-Helaire to a sprained knee ligament. Jones continues to deal with a lingering wrist injury.

Also missing practice with knee inflammation was linebacker Anthony Hitchens, who calls the plays in the middle of the defense. Defensive back Charvarius Ward remained out with a quad injury that sidelined him against Buffalo, and starting guard Joe Thuney missed practice with a broken hand sustained against the Bills.

Backup tight end Blake Bell joined the long list of starters on the sideline with a sore back as the Chiefs, at 2-3 and in last place in the AFC West, prepared for their trip to Washington on Sunday.

“It seems like a long list,” Chiefs coach Andy Reid acknowledged, “but when it's all said and done, we'll get some of these guys back here in the next little bit, which is a positive thing.”

The Chiefs haven't been truly healthy all year, losing safety Tyrann Mathieu to a positive COVID-19 test, defensive end Frank Clark to a hamstring injury and linebacker Willie Gay Jr. to a tie injury before the opener against Cleveland.

This is a new level for the two-time defending AFC champions, though.

Hill managed to finish the game against Buffalo with seven catches for 63 yards, but any injury to the legs of a player whose speed is his primary weapon is worth noting. It's even more important given the fact the Chiefs have few proven pass-catchers besides Hill and tight end Travis Kelce, who picked up a stinger against the Bills.

Thuney took part in Wednesday's walkthrough, even though he missed practice, and Reid said it was unlikely that one of the Chiefs' premier offseason acquisitions would land on the injured reserve list.

“We'll give him a little time here for that thing to settle down,” Reid said. “He'll have a chance to be OK.”

Edwards-Helaire went on the IR list Tuesday with a sprained MCL in his knee, which means Darrel Williams will get the start against Washington with Jerrick McKinnon backing him up. And because the Chiefs typically have three running backs active on game day, the Chiefs signed Elijah McGuire to join Derrick Gore on the practice squad.

Williams has been a key contributor for the Chiefs the past four years, appearing in every game last season and taking on an increased role when Edwards-Helaire sprained his ankle. But he has never before started an NFL game.

“It's something big for my mom and dad," Williams said. “I didn't get drafted, and just the look in my parents' eyes — watching my mom cry — that meant something to me because I had never seen my mom cry. Having that moment and not getting drafted, I took that to heart. Now I get this opportunity. I have to make the most of it.”

On the defensive side, Hitchens has been banged up most of the season. Ward hasn't played since the Chiefs' Week 2 loss in Baltimore, forcing the Chiefs to use a revolving door of fill-ins opposite struggling L'Jarius Sneed. And while Clark came back last week against Buffalo, he managed just two tackles and failed to pressure the quarterback.

Jones might be the biggest missing piece, though. The Chiefs were counting on the two-time Pro Bowl defensive tackle to help them generate more pass rush by moving him to defensive end, but after two sacks in the opener against Cleveland he had been held completely in check before missing last week's game against the Bills.

Asked when he'll return, Reid replied: “When he feels comfortable he can play. I mean, that's literally it. When he feels that he can do his job, he'll be back in. He's getting better, though. That's important.”

In the meantime, the Chiefs are pressing on without him.

Without a bunch of others, too.

NOTES: Gay played for the first time this season Sunday, one day after posting on social media that he was struggling with his mental health. “I'm proud of him for mentioning it. A lot of people don't mention it. That's a great tribute to the kid bringing it forward," Reid said. “He was able to talk to (our doctors) and address the problem. I think that's a beautiful thing. So many people keep these things hidden and disastrous things happen. I'm glad he came forward.”

By Dennis Waszak Jr. 31 minutes ago
By Greg Beacham 2 hrs ago
By Tom Withers 6 hrs ago
By Rob Maaddi 20 hrs ago
By Mark Anderson 21 hrs ago