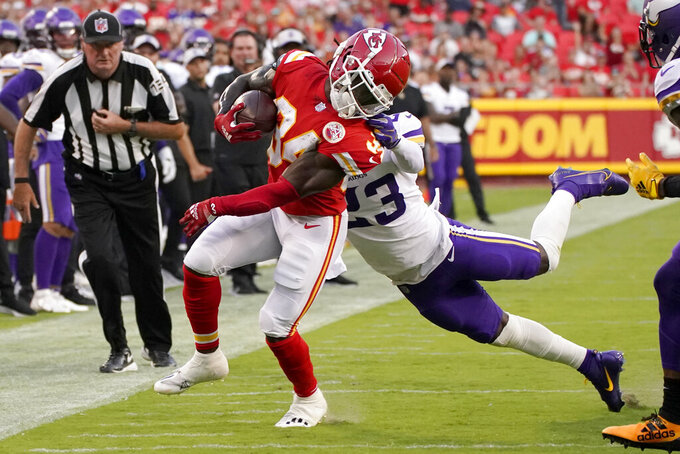 KANSAS CITY, Mo. (AP) — The Chiefs began trimming their roster to the 53-man limit for the regular season on Monday, and coach Andy Reid may have found himself having a more difficult time this year than any other during his tenure in Kansas City.

Take the offensive line, for example. The unit had been dominated by the Tampa Bay Buccaneers in a Super Bowl fiasco, forcing general manager Brett Veach to tear it down and start all over.

In fact, the line was so drastically different by the time preseason games began that three Super Bowl starters were among the second-team unit.

It's not just the offensive line where the Chiefs had an abundance of depth during training camp.

Among the early cuts Tuesday were running backs Darwin Thompson and Derrick Gore, both of whom showed some flashes in the preseason. Thompson was a sixth-round pick in 2019 who had appeared in 26 games over the past two seasons, and Gore had a nifty 56-yard touchdown reception as the Chiefs wrapped up preseason with a win over Minnesota.

The fact both were let go means starter Clyde Edwards-Helaire, who has been dealing with an ankle injury, and longtime backup Darrel Williams, who sustained a concussion, should be ready for the opener Sept. 12 against Cleveland.

The Chiefs also have Jerrick McKinnon, who showed a good grasp of the playbook after signing as a free agent.

“He's been doing this a long time, especially for running backs,” Reid said. “The average longevity is like, three years, so for him to have been in it and doing it this long, he brings great experience. And he sure has a knack for the pass game.”

The Chiefs were not expected to publish a full list of roster cuts until Tuesday, when all teams are required to reach the 53-man limit for the regular season. But most of those who will be searching for work elsewhere trickled out Monday, most of them confirmed by the players or their agents on social media.

Three wide receivers were released in Darrius Shepherd, Dalton Shoen and Maurice Ffrench, who spent last season on the Chiefs' practice squad. So was offensive lineman Wyatt Miller, who failed to crack a suddenly deep group up front.

On the other side of the ball, defensive end Demone Harris was released after competing throughout camp with Tim Ward for a roster spot. Another defensive end, Austin Edwards, was released along with linebacker Omari Cobb, defensive back Zayne Anderson and Devon Key, a young safety whom the Chiefs would like to sign to their practice squad.

Some of the moves could have a big impact on special teams, which is often the decider on the last few roster spots.

“Sometimes you lose guys you want to keep,” Chiefs special teams coach Dave Toub said, “but you go in, you make your arguments for guys and they have to be solid offensive or defensive players first, obviously. Then it's our job to turn those guys down the line into good special teams players, and that's the way it works.”

On Wednesday, the Chiefs and other NFL teams can begin assembling their practice squads.

That means up to 16 players, rather than 10, and more chances for teams to sign players who have been in the league for an extended period of time.

“There are a couple of spots we have questions,” Reid said, “but Veach has done a nice job of bringing in great competition, so we have to make some decisions in certain areas. Maybe we keep a guy here or there that we normally wouldn't keep at a key position and have a little bit of an overload because he's been a good player. It's just part of it.”