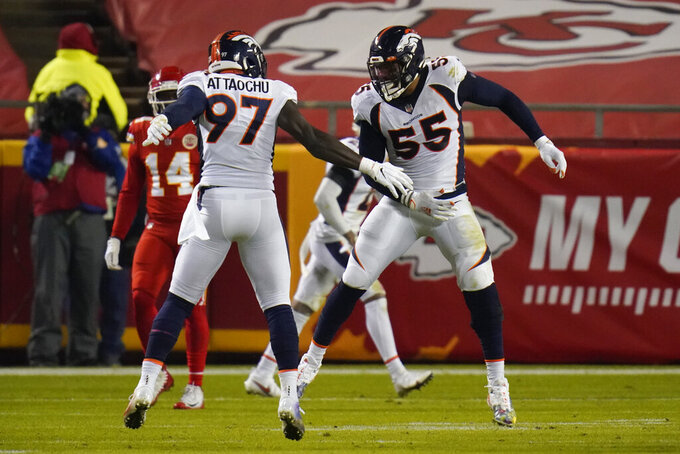 KANSAS CITY, Mo. (AP) — The Kansas City Chiefs are so dynamic offensively they sometimes don't even know when they've scored a touchdown.

They were fortunate one of those cases didn't come back to bite them Sunday night.

Patrick Mahomes threw for 318 yards and a score, Harrison Butker was perfect on five field-goal attempts, and the underrated Chiefs defense bailed out an offense that struggled once again in the red zone — and made two big mistakes that cost them touchdowns — in a 22-16 victory over the Denver Broncos.

Travis Kelce had eight receptions for 136 yards along with the go-ahead TD grab late in the third quarter, and Tyrann Mathieu twice picked off Broncos quarterback Drew Lock — the second with 24 seconds left to seal the win — as the Chiefs clinched a playoff berth by improving to 11-1 for the second time in franchise history.

“It's obviously a big deal — you want to find a way to get in the playoffs," Mahomes said, “but we have bigger goals.”

It might help their cause if the Chiefs actually count the touchdowns they score.

The play everyone was left talking about came on third-and-10 at the Denver 40 early in the second quarter. Mahomes found a wide-open Tyreek Hill downfield, only for him to appear to drop the certain touchdown. But replays clearly showed the ball trapped between Hill and a defender, never touching the ground, for what should have been a score.

Hill never argued when it was called incomplete, though, nor did Chiefs coach Andy Reid throw his red challenge flag.

Instead, he quickly sent his punt team out and tried to pin the Broncos deep in their own territory.

“I checked with Tyreek," Reid said afterward. “He came off, and normally you can tell with a receiver whether he had it or not — especially Tyreek — and he was surprised as any of us he ended up with the football.”

Hill also had a 48-yard touchdown reception wiped out by holding late in the game, which gave the Broncos (4-8) a chance to march for the go-ahead score. Denver managed to move to midfield before stalling, but rather than going for it on fourth-and-3 with 6 minutes to go, coach Vic Fangio elected to punt the ball away.

The Chiefs melted most of the clock before Butker kicked a 48-yard field goal with 1:06 left, and the Kansas City defense forced Lock into a wild fourth-down throw that Tyrann Mathieu intercepted to put the game away.

“I gave it strong consideration,” Fangio said of his fourth-down call, “but you know, at some point in the game, we’ve got to get a stop, and we weren’t able to. We held them to a field goal but that made it a touchdown game and burned off some of the time there, so in retrospect, should have probably gone for it.”

Lock returned after missing last week's game against New Orleans, along with the rest of Denver's quarterbacks, because of COVID-19 positive tests and contact tracing. The local boy finished with 151 yards passing and two touchdown throws to Tim Patrick, while Melvin Gordon ran for 131 yards on just 15 carries.

“There's no feel-good losses in this league,” Lock said. “We did play them closer than we have before, but I mean, what does that get you? Nothing. It gets you an upset locker room. It gets you a sad flight home.”

Made even more stinging is how close the Broncos came to springing the upset.

The Chiefs didn't take the lead until Butker's fourth field goal early in the second half, then answered the second Lock-to-Patrick touchdown connection with a TD of their own. With a defender hanging on his jersey, Mahomes tossed a 15-yard scoring pass to Kelce, ending their streak of seven straight red-zone trips without a touchdown.

The Chiefs defense made sure that the only touchdown they scored in the game would be enough.

“It's such a blessing to have that guy back there slinging it around,” Kelce said, “because he takes the ultimate pride in his craft and playing the game, and you know you can always count on him.”

The Chiefs learned early Sunday that they had returned seven positive tests, but it wound up being a computer glitch and the game was allowed to proceed. “When they talk to you early in the morning like that, you're not sure what is real and what is not real,” Reid said. “They said, ‘Let’s give us an hour to work through this thing and see if we can get it right,' and it all came back where we were OK.”

Broncos defensive end Shelby Harris, who had COVID-19 along with his pregnant wife and three children, returned for the first time in about a month. But after describing his “weird headaches” and “nerve pain” in detail Friday, Harris was stunned by the lax approach taken by some Chiefs fans to wearing masks and social distancing. “They really don't care about COVID in Missouri,” he said in a pregame tweet, followed by: “Full tents of people tailgating makes no sense.”

Broncos: C Graham Glasgow left with a foot injury in the first quarter. CB Essang Bassey, pressed into a bigger role after Bryce Callahan (foot) landed on IR this week, left with a knee injury on the first drive of the second half.

Chiefs: CB Antonio Hamilton had to be helped off the field after blocking on a punt return early in the fourth quarter.

Broncos: Visit the Panthers on Sunday.

Chiefs: Visit the Dolphins on Sunday.