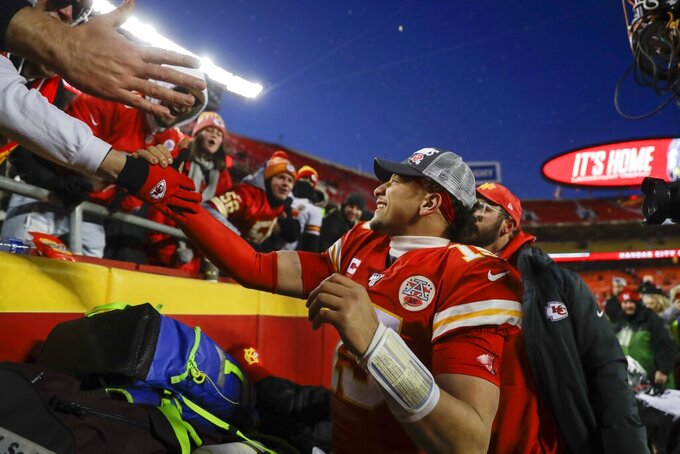 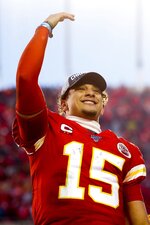 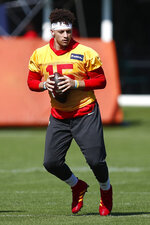 MIAMI (AP) — Long before he ever dreamed of playing football for a living, much less playing in the Super Bowl, Patrick Mahomes tagged along with his dad as he bounced around the major leagues as a journeyman pitcher.

He hung around superstars like Alex Rodriguez and Derek Jeter. He watched how they prepared and saw how they dealt with both success and failure.

The lessons he learned are a big reason why he’s the starting quarterback for the Kansas City Chiefs in the Super Bowl. They’re also why he’s the rare player who could be the face of the NFL for years to come.

“Just to see guys like that definitely instilled in me that I had to work hard if I wanted to be a professional athlete," Mahomes said. “You see guys going out there and performing and being great, but you understand how much hard work it takes.’’

Having good genetics helped, too. Mahomes’ father, Pat, was a hard-throwing righty who played for six teams in an 11-year pro career that ended in 2003, when his son was 8.

Good parenting also played a part in the grooming of a player who has taken the Chiefs to the Super Bowl for the first time in a half century. Mahomes always credits his mother and father first before going down the list to other influences — and there are many — in his life.

From his father came the message to have passion and pride in everything he does. From his mother, it was love and encouragement to be great in whatever he does.

At the age of 24 he’s well on his way to that. Listen to Mahomes talk for very long and the chances are he’ll spend much of that time praising someone else instead of talking about himself.

Is this guy perfect? No, he’s got a funny haircut and a voice that takes some getting used to. Teammates will tell you he sometimes plays practical jokes on them when they least expect it.

But in a week of nonstop talking leading up to the Super Bowl, no one has said a bad word about him yet.

Mahomes and his teammates made enough of those plays together to get to the Super Bowl, a year after an excruciating loss to the Patriots in the AFC championship game. Mahomes rallied his team with 24 fourth quarter points to tie that game but the Chiefs lost 37-31 after never getting the ball back from Tom Brady in overtime.

The reason the Chiefs are in it now? The same genetics and hard work that convinced a team with a perfectly able quarterback in Alex Smith to draft Mahomes in the first round to begin with.

The genetics came into play when Mahomes limped off the field in October against Denver with what everyone in Kansas City feared was a season-ending injury. It turned out he had dislocated his knee, and less than a month later he was back on the field in a losing effort against Tennessee.

The Chiefs haven’t lost since.

“When I got hurt I literally had no idea what was going to happen," Mahomes said. “I mean when you look at your knee and it’s at the side of your leg, you think the worst."

Mahomes, of course, is the big reason why the Chiefs are a 1-point favorite against the San Francisco 49ers and why oddsmakers think the game will be high scoring. The 2018 MVP has an innate ability to make tacklers miss, and his receivers have discovered they will be rewarded if they never give up on a play with the ball in his hand.

He’s got the arm of a pitcher who throws 90 mph — which he did in high school — and can throw a football from angles that don’t make geometric sense. He seems to understand better than most veteran quarterbacks when to push the envelope and when to be satisfied with what the defense is giving on any particular play.

But mostly he’s got the ability to lead a team when it matters most. And it doesn’t matter more than in the Super Bowl.

“He’s a kid that grew up in a locker room, so he’s got a feel for that," Chiefs coach Andy Reid said. “He understands the leadership role that he’s been asked or put in position for and how important that is. You just give him a little guideline on that and he takes it and goes"

Mahomes said he’s still learning, still trying to improve. Still taking advice from A-Rod, too, who sent him a text this week to make sure he enjoys the whole Super Bowl experience.

So far, at least, he’s doing just that.

And on Sunday the real fun begins.