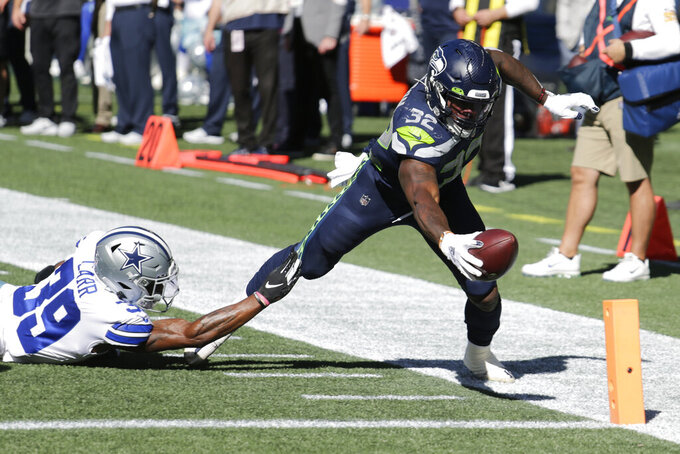 Seattle Seahawks running back Chris Carson (32) dives near the end zone as Dallas Cowboys cornerback Brandon Carr (39) attempts the tackle during the first half of an NFL football game, Sunday, Sept. 27, 2020, in Seattle. The Seahawks won 38-31. (AP Photo/John Froschauer)

FRISCO, Texas (AP) — The Dallas Cowboys released defensive back Brandon Carr on Tuesday, cutting ties with the 13-year veteran after bringing him in just before the season for depth in the secondary.

Carr, who was with the Cowboys for five of his first 12 seasons while starting all 192 of those games, rejoined the club on the practice squad. That group was expanded from 10 to 16 with all veterans eligible because of the pandemic.

The 34-year-old was moved to the active roster for the opener but didn't play, ending his streak of consecutive games. Carr played sparingly in the past three games. He spent the previous three years in Baltimore.

The move with Carr comes with cornerback Anthony Brown eligible to come off injured reserve. Brown sustained a rib injury in practice before the second game of the season. Dallas plays the New York Giants at home Sunday.

While seven-time Pro Bowl left tackle Tyron Smith returned last week after missing two games with a neck issue, right tackle La'el Collins is out for the season with a hip injury that is requiring surgery.

A pair of undrafted young tackles in Brandon Knight and Terence Steele have filled in for Smith and Collins. Steele started the first four games in Collins' spot, but was replaced by Knight in the first half of last week's 49-38 loss to Cleveland.