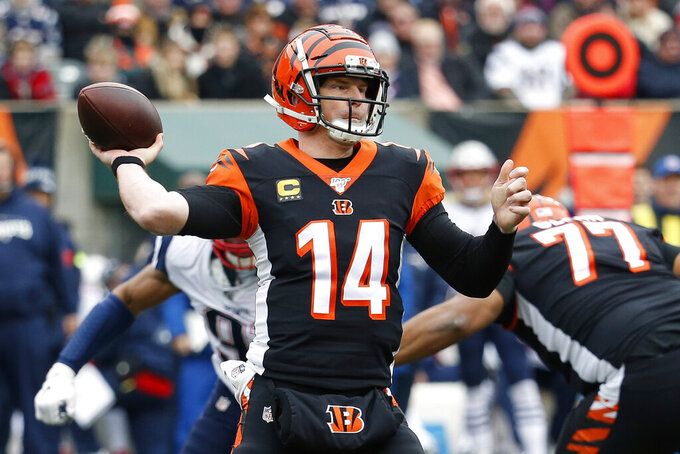 FILE - In this Dec. 15, 2019, file photo, Cincinnati Bengals quarterback Andy Dalton (14) passes in the first half of an NFL football game against the New England Patriots in Cincinnati. Dalton is coming home to Texas as Dak Prescott's backup with the Dallas Cowboys. Dalton and the Cowboys agreed to a one-year deal that guarantees the former Cincinnati starter $3 million and could be worth up to $7 million, two people with direct knowledge of the deal told The Associated Press on Saturday, May 2, 2020. (AP Photo/Frank Victores, File)

FRISCO, Texas (AP) — The Dallas Cowboys signed quarterback Andy Dalton on Monday and waived Cooper Rush, who had been the backup to Dak Prescott since the middle of the 2017 season.

Dalton is guaranteed at least $3 million on the one-year deal that could be worth up to $7 million for the 32-year-old former Cincinnati starter. The Bengals released Dalton with a year remaining on his contract after drafting Joe Burrow first overall.

It's the biggest investment in a backup by the Cowboys since Kyle Orton was behind Tony Romo in 2012-13. Orton replaced an injured Romo for the regular-season finale in 2013 when Philadelphia beat Dallas with a playoff berth on the line.

Prescott hasn't missed a game in his four seasons, including three playoff starts. Rush, an undrafted free agent in 2017 out of Central Michigan, got mop-up duty in five games over three seasons. He completed one of three passes.

Rush signed a $2.1 million tender as a restricted free agent in March. There was no guaranteed money in the deal, and he was free to negotiate with other teams.

Behind Dalton, the No. 3 job should come down to James Madison's Ben DiNucci, a seventh-round pick this year, and Clayton Thorson. The former Northwestern QB was a fifth-round pick by Philadelphia last year before the Cowboys signed him to their practice squad.