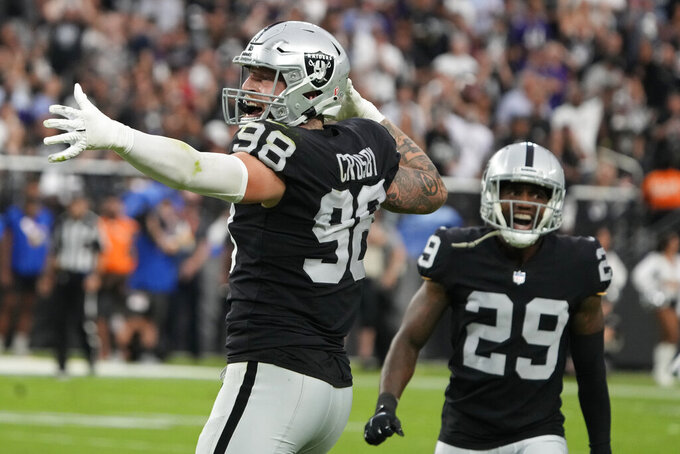 Las Vegas Raiders defensive end Maxx Crosby (98) celebrates after a play against the Baltimore Ravens during the first half of an NFL football game, Monday, Sept. 13, 2021, in Las Vegas. (AP Photo/Rick Scuteri)

HENDERSON, Nev. (AP) — Maxx Crosby remembers his father coaching him during pee wee football with one major rule: “Don’t be all bark, but no bite.”

It has stuck with the Las Vegas Raiders defensive end to this day.

“I want to go out there and show everybody, 'listen, this is what I’m all about,'" Crosby said Wednesday. “It starts not just on the field. It’s the weight room, it’s meetings, it’s everything. That’s what I try to do every single day.”

It’s what he did Monday in his first game as a team captain, registering six tackles, two sacks and two tackles for loss in Las Vegas’ come-from-behind 33-27 overtime victory over Baltimore. Crosby’s 93.1 pass rush grade by Pro Football Focus tied for first among all edge rushers in Week 1.

The performance particularly stood out because it came against Ravens quarterback Lamar Jackson, the league’s MVP two seasons ago.

“Maxx did a great job,” Jackson said. “I know he wanted to get a sack on me because me and him have mutual friends. They told me about it. I can’t let him get me, but he finally got me. He did a great job.”

The performance earned Crosby the AFC Defensive Player of the Week honors.

“Anytime you go out there and have a good game, it’s awesome,” Crosby said. “Just trying to get my body back to where it used to be, and the Pittsburgh Steelers. That’s our main focus right now and we’re really excited.”

Crosby’s preparation has been impeccable leading up to the season and he's provided an example for a young defense that struggled last season but collectively came up with timely stops against Jackson and the Ravens.

Coach Jon Gruden and quarterback Derek Carr have been nothing short of complimentary about the third-year edge rusher from Eastern Michigan who was selected in the fourth round in 2019.

For perspective on what Gruden thinks of Crosby’s work ethic and progress, the Raiders selected defensive end Clelin Ferrell with the fourth overall pick in that same draft. Ferrell was a healthy scratch from the lineup Monday night, while Crosby played before more than 61,000 fans, the first full crowd for the Raiders at Allegiant Stadium.

Crosby said he’s already “flushed” the win and his performance and moved on to Week 2 and the team's next opponent, the Steelers.

“I’ve been locked in on them because it’s a week-by-week basis and a week-by-week league,” Crosby said. “You never know how things are going to turn out, so you’ve really got to stay locked in.”

Especially since the Raiders’ injury list is long. Seventeen players were listed Wednesday, including 10 from the defensive side of the ball. Three were from the defensive line alone: tackle Gerald McCoy, who was lost for the season with a knee injury, and ends Carl Nassib (pectoral/toe) and Yannick Ngakoue (hamstring). Nassib didn't participate in practice Wednesday, while Ngakoue was limited.

In light of the McCoy loss, Las Vegas signed defensive tackle Damion Square off the Bears' practice squad and will put him on the 53-man roster.

“That’s the nature of this business,” Crosby said. “Guys are going down and there’s new guys in the building every day. It’s a crazy business.”

Which is why he said he’s analyzed film from Pittsburgh’s game against the Bills on Sunday, stressing to his defensive teammates the importance of consistency every week.

“Everybody sees what I’m doing,” he said. “They know I’m putting in the work. I want them to see that every single day because if I’m going to say something in a game, they’re going to have more respect for me. It’s all about putting in the work ahead of time and continue to do it on the field and outwork everybody. That’s how it was my dad has taught me that since I was a little kid.”