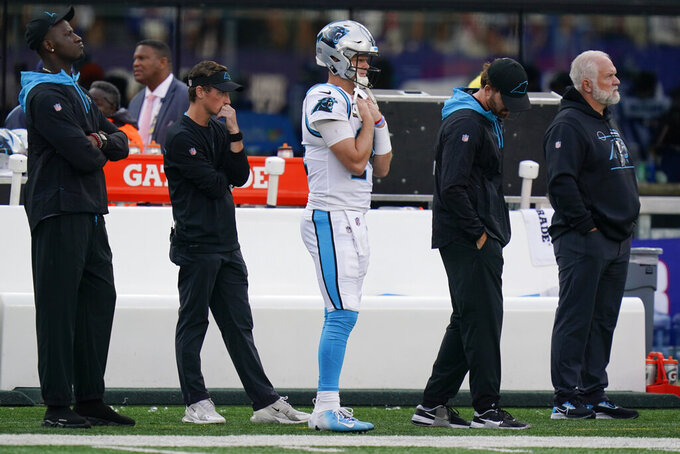 CHARLOTTE, N.C. (AP) — Seven games into Sam Darnold’s tenure with the Carolina Panthers there are serious concerns about his ability to develop into the team’s quarterback of the future.

The slumping Darnold, who has thrown seven interceptions during the team’s four-game losing streak, was benched in the second half of Carolina’s 25-3 road loss to the New York Giants on Sunday raising speculation whether the Panthers might reconsider trading for Deshaun Watson.

The Panthers have viewed the potential asking price for Watson as too steep in the past, but Darnold’s lack of progression — and owner David Tepper’s desire for a proven quarterback to lead the franchise forward — could prompt Carolina to make a move before the Nov. 2 trade deadline.

Watson, who played college football a few hours away at Clemson, has not played this season for the Houston Texans after 22 women filed lawsuits alleging sexual assault or harassment. The NFL is investigating the matter and it's possible Watson could be subject to league discipline, which complicates any potential trade.

Panthers coach Matt Rhule said last week the Panthers weren't in the market for another quarterback.

When asked if Darnold's poor performance Sunday changed that thinking, Rhule said, “No. Obviously, I want Sam to play better, but he’s the guy we’re focused on.”

Rhule went on to say of the impending trade deadline impacting that decision, “I can’t look to the future, but I don’t believe it will. Everyone’s disappointed right now. There are emotions flying around, all those things. At the end of the day, you saw the game, it wasn’t very good in any regards.”

Still, general manager Scott Fitterer has said in the past that he will be “in on every trade talk" so it won't be a surprise if the team revisits the Watson situation.

Darnold looked decent in the team's first three games, but he's struggled as the team's on-field leader since running back Christian McCaffrey went down with a hamstring injury in Week 3.

Rhule has been careful to deflect blame from Darnold for most of the season, but the second-year head coach expressed his deepest and most direct criticism of his quarterback on Sunday after benching him for P.J. Walker.

“Sam’s got to take care of the football,” Rhule said. “Sam’s got to throw on time and if it’s not there, find the check downs. We can’t be driving with a chance to go take the lead and throw interceptions. His sense of urgency this week, I expect to be heightened."

There aren't many bright spots following a lopsided loss, but wide receiver D.J. Moore had six catches for 73 yards against the Giants. Moore was coming off a week when he had three drops, and there was one pass he potentially could have caught in the first quarter, although it was a little off the mark. Moore has certainly been more effective than fellow wide receiver Robby Anderson, who was limited to fewer than 15 yards receiving for the second straight week. Anderson has had four drops in the past two weeks.

Everything. The Panthers desperately need McCaffrey back on the field. They're 0-4 without him in the starting lineup. Rhule vowed last week to recommit to the running game against the Giants, but Chuba Hubbard had just 28 yards on 12 carries. As a team the Panthers were held to 56 yards rushing.

“If you want to run the football, you have to stay on the field,” Rhule said of his team going 2 for 15 on third downs. “We made an emphasis on running the football this week. It didn’t show up.”

McCaffrey is out at least another week with a hamstring injury. The offensive line has been horrible the last four weeks and the defense has gotten worn down late in games, perhaps a result of the offense's ineffectiveness.

Injury returners. The Panthers are hoping to get linebacker Shaq Thompson back from a foot injury, which would be a huge lift for the defense. Thompson is not only a team captain, but the defense's emotional leader. He has missed the last three games. Safety Juston Burris and recently acquired cornerback Stephon Gilmore also could debut for the team this week against the Falcons.

Joe Brady. Carolina's offensive coordinator was once perceived as a hot NFL head coaching candidate, but it's hard to imagine anyone talking to Brady after this season given how poorly the offense has performed. Carolina has failed to protect Darnold and the offense hasn't been very imaginative for a team that supposedly has an offensive guru calling plays. Brady came from LSU, where he helped the Tigers win a national championship. That head coaching job is currently vacant, so Brady could be a potential candidate there.

Guard John Miller left Sunday's game with a foot injury and did not return. Carolina is hoping to get guard Pat Eflein back on the field next week, which could help. But the reality is outside of right tackle Taylor Moton, nobody has been very good on the offensive line.

173 — total yards for the Panthers' offense on Sunday, the fewest in the Rhule era.

3 — points scored on Sunday, also the fewest in the Rhule era.

Frustration is running high in Carolina, but the good news is the Panthers will get some help this week on defense with some players potentially returning vs. Atlanta. The bad news is they're still without McCaffrey for at least another week on offense, and this offensive line isn't getting any better. Don't rule out the Panthers making a trade for an offensive lineman before the deadline.