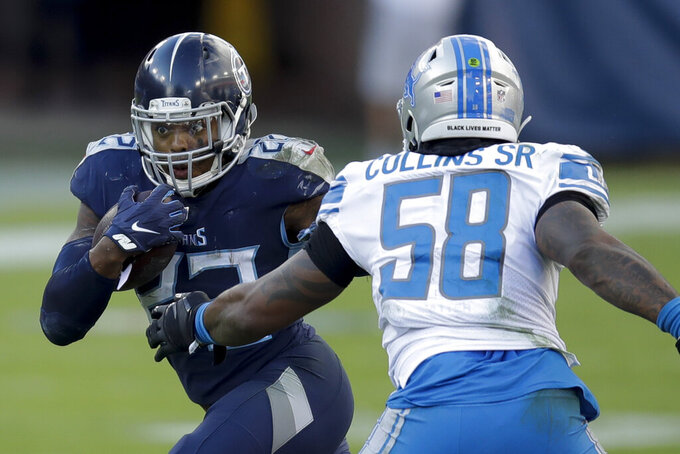 FILE - In this Dec. 20, 2020, file photo, Tennessee Titans running back Derrick Henry , left, runs past Detroit Lions outside linebacker Jamie Collins during the second half of an NFL football game in Nashville, Tenn. Henry led the NFL with 1,540 yards rushing last season before running the Titans to their first AFC championship game in 17 years. (AP Photo/Ben Margot, File)

NASHVILLE, Tenn. (AP) — Derrick Henry has been running into lots of NFL records, and now he's a game away from joining another exclusive group.

Only six men have led the NFL in rushing in consecutive seasons since the league went to a 16-game season, and no one has managed that feat since LaDainian Tomlinson went back to back in 2006 and 2007.

Tomlinson believes it's a foregone conclusion that Henry will join that group when the regular season ends Sunday.

“It’s pretty remarkable to be able to do it, to call yourself back-to-back rushing champs,” Tomlinson said. “It’s a small elite club, and it’s a big deal. So ... I’m wishing him the best. I’m rooting for him.”

Henry led the NFL with 1,540 yards rushing last season before running the Tennessee Titans to their first AFC championship game in 17 years. Henry easily has topped that with 1,777 yards, putting him 220 ahead of Minnesota's Dalvin Cook going into Sunday's regular-season finale at Houston (4-11).

Not that the two-time Pro Bowler and 2015 Heisman Trophy winner tracks yards as he tries to run the Titans to their first Super Bowl in 21 seasons.

The 6-foot-3, 247-pound Henry is disproving the NFL trend of pass-happy offenses with running backs devalued as replaceable parts not worth contract extensions. The Titans made clear how much they value Henry by signing him to a four-year deal worth up to $50 million in July.

That only made Henry a bigger target this season.

Adrian Peterson led the NFL in rushing three separate seasons but never consecutively. He said that's why being the top rusher in back-to-back seasons is so hard, especially when combined with so many talented running backs in the league.

“You never know who's going to come out and have a great year,” Peterson said. ”Especially that next year when your name is what it is and you're Derrick Henry. Teams are coming in, they're trying to stop you, and that right there makes it even more impressive to see what he's been able to accomplish."

He's also upped his average per carry each of the past three seasons and currently is at 5.2 yards a carry.

That production when defenses pack eight and nine defenders near the line trying to stop him is why Tomlinson thinks Henry is this generation's Jim Brown.

“People shouldn’t take that as, ‘Oh, my God, what a quote,’" Tomlinson said. “It’s literal fact what he’s doing and the way he runs the ball just like Jim Brown back in the day who was going to get the ball. You knew that he was going to have it 20-plus times, but could you stop him? And people cannot.”

Tomlinson said that's because Henry has traits of a smaller runner with speed, quickness in and out of the hole along with great feet, vision and a “master stiff arm.” Combined with Henry's size, Tomlinson said that adds up to a comparison to Brown.

“He is this generation’s Jim Brown, and he’s backing it up because he’s consistently now over the years putting together numbers to back up that he’s one of the best,” Tomlinson said.

Peterson sees some of former Titans running back Eddie George in Henry, with both 6-3, along with some of Terrell Davis, who ran for 2,008 yards in 1998 during a decade dominated by Barry Sanders and Emmitt Smith.

“He’s bigger than linebackers, so you look at what he did to Josh Norman was just like ...” Peterson said of the Henry stiff arm that sent the Buffalo cornerback flying in October. “I know when people watch film on him they gotta come strapped up and ready to wrap up."

The big worry is the workload taking a toll. Henry had 386 carries combined in 2019 counting the playoffs, and he's at 344 now.

Tomlinson had at least 300 carries in seven of his 11-year career. Peterson has had four 300-carry seasons.

Pro Football Hall of Famer Earl Campbell, the only running back in franchise history to lead the NFL in rushing more than one year, had at least 300 carries as he led the league his first three seasons.

“He's punishing other guys, and it’s a big difference when you're carrying the ball that many times being able to be the guy that’s initiating those blows,” Peterson said.

Henry starts his offseason early each year working with his trainer to keep pushing his conditioning level. Once football starts, Henry rarely stops, catching passes or often working in a sand pit when he's not involved in drills. And yes, Henry keeps lifting weights throughout the season.

“He's tremendously blessed,” Titans running backs coach Tony Dews said. “He has some God-given abilities and then obviously his size helps him.”

Henry also has an added touch. Just watch him on TV the next time he breaks away in the open field.

“His eyes are always wide every time that he runs the ball, period,” Titans left guard Rodger Saffold said. “You take a picture of his face anytime you see him run, you can see that.”