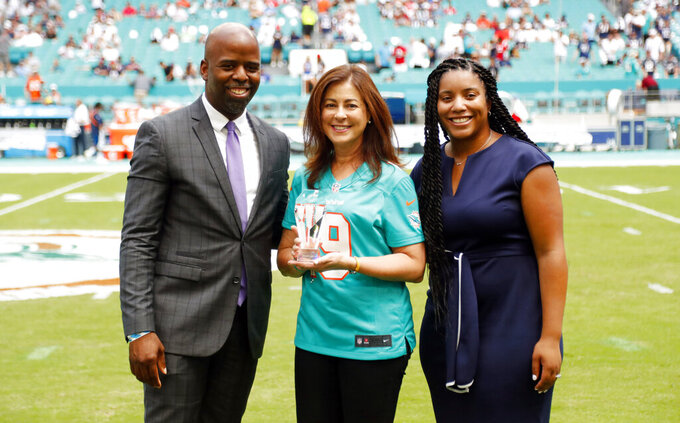 Jenkins joined the Dolphins in 2009, after spending nearly seven years working with the San Francisco 49ers. He also worked at Texas Southern, Lehigh and Texas Tech — his alma mater, which asked him to deliver a commencement address in 2018.

“I’m here to tell you, it won’t be your geography that marks your journey," Jenkins said in that speech. “It’ll be three things: the depth of your relationships, the foundation of your values and the courage of your decision-making. So my career, and life, has been awesome.”

The Houston native is survived by wife Elizabeth and three children. The Dolphins announced his death during their preseason game Saturday against Philadelphia.

Dolphins coach Mike McDaniel struggled to hold back emotions after the game when talking about Jenkins, shortly after telling his team of his death. He raved about everything from Jenkins' work ethic to his to professionalism to his wardrobe.

“This was a healthy, healthy guy that just brought it every day. ... Just full of life," a teary McDaniel said. “That's the hardest part. There's just no words to describe. He has a great family. His wife's awesome, and his children. It's tough. It's a tough one to swallow. He will be missed. He will not be forgotten, I can tell you that much."

Tributes poured in from other sports media relations professionals, from many leagues, on social media after the Dolphins made the announcement. Cleveland Cavaliers vice president B.J. Evans said Jenkins was “a great human being,"

“I am heartbroken," Dolphins owner Stephen Ross said. “Jason Jenkins was an icon in the Miami community, and above all a kind and incredible family man."

He also often spoke to civic groups around the area.

“Our hearts are broken and grieving the loss of a man who was a dear friend and beloved by so many people,” Dolphins vice chairman, president and CEO Tom Garfinkel said. “Jason faithfully served the Dolphins organization for 14 years, was a beacon in the community, a trailblazer and champion for others, and above all, treated people with a kindness and dignity that left a lasting mark on everyone he met."