Douglas says Jets plan to connect with Adams after draft 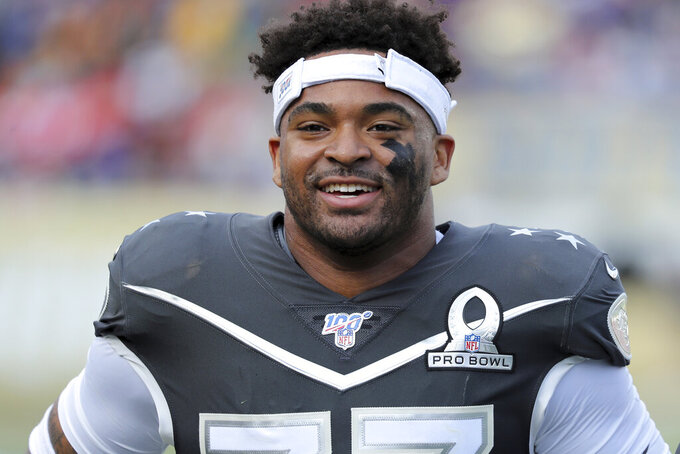 Just like the New York Jets general manager's game plan when it comes to the star safety's contract situation.

“Jamal’s an unbelievable young player, and our plan is to keep Jamal here a long time,” Douglas said in a pre-draft conference call with reporters Monday.

The GM acknowledged he hasn't had any conversations recently with Adams, who is looking for a long-term contract extension. ESPN reported last week that the All-Pro safety was planning to skip the start of the Jets' remote voluntary offseason program, which begins next Monday.

Still, it's clear Adams wants to take care of his contract situation sooner rather than later. Adams said in January that preliminary discussions had occurred, but Douglas provided a timeline for when official talks between the sides might begin.

Adams is scheduled to make $3.5 million this season, the final year of his rookie deal, and he has outperformed that deal by quickly becoming one of the best players at his position and making the Pro Bowl in his second and third NFL seasons. The 24-year-old safety has also been widely acknowledged by teammates and players to be one of the emotional forces in the Jets' locker room.

Douglas and Jets CEO Christopher Johnson have also said they would like Adams to be “a Jet for life.”

But New York also has some wiggle room when it comes to Adams' contract. The Jets have a fifth-year option for 2021, worth $9.9 million, and could potentially use the franchise tag on him in 2022.

That, however, would likely not sit well with Adams, who was also bothered last year when his name came up in trade talks — and Douglas took calls from other teams rather than declaring him an untouchable. Douglas said at the time that New York thought highly of Adams and the exorbitant cost teams would need to pay to get him in a deal reflected that. But, Adams was upset by the thought of the Jets even considering that possibility, and didn't speak to Douglas or coach Adam Gase for a few days.

With the NFL draft beginning Thursday night, Adams' name has again come up in trade rumors. Douglas was asked if by not saying Adams will definitely be with the Jets for many years, the GM was “hedging” his bets.

“I’ve made it known that ... the plan would be for Jamal to be here long term,” Douglas said. "Then again, I’ve also made it known that I have to do what’s in the best interest of this team. If other teams call to talk about players, I’ll listen. But going into this draft, my intent isn’t to move any players. But if a team calls, we’re going to have conversations.

Douglas wouldn't comment whether the Jets have had any talks with other teams in recent weeks involving Adams. The GM also said “I'm not even going to touch that one,” when asked if he believes in a meritocracy and whether Adams should be the team's highest-paid player. The safety is currently scheduled to be 10th on New York's payroll, according to overthecap.com.

“He's an outstanding player,” Douglas reiterated. “And we would like him to be here a long time.”