Early titles with Patriots lead to Hall of Fame for Seymour 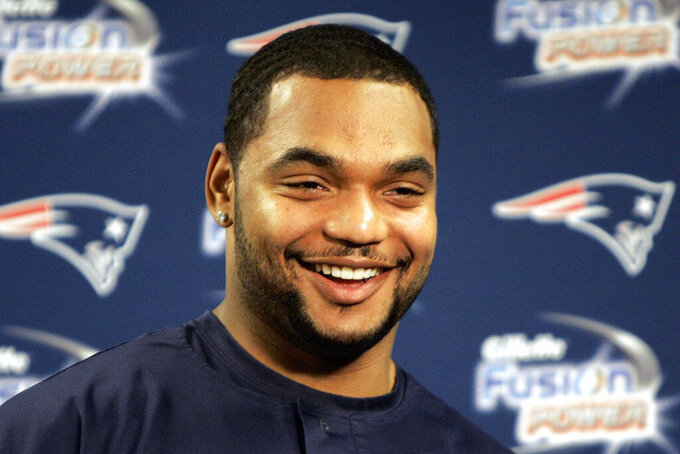 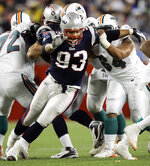 Richard Seymour was winning Super Bowls with the New England Patriots before, as he put it, Tom Brady was Tom Brady.

The defensive lineman's early success — three championships in his first four seasons — is as good a starting point as any for how Seymour ended up in the Pro Football Hall of Fame.

“We’d have a saying with the Patriots that stats can be for losers,” Seymour said. “I was asked to do selfless things.”

Seymour had 57 1/2 career sacks in 12 seasons, the first eight in New England before finishing his career with the Oakland Raiders.

His three All-Pro seasons were two more than each of the other two Hall of Famers categorized as defensive ends and tackles — Chicago's Dan Hampton and San Francisco's Bryant Young.

The Patriots did, indeed, win with defense when Seymour was a rookie in 2001, the year Brady became the starter. New England turned into a top 10 defense that year, then held the “Greatest Show on Turf” without a touchdown into the fourth quarter of the Super Bowl before beating the St. Louis Rams 20-17 on Adam Vinatieri's final-play field goal.

New England missed the playoffs in 2002 before winning the next two Super Bowls, over Carolina and Philadelphia. Dallas is the only other franchise to win three Super Bowls in four seasons (1992-95).

Seymour, who is set for enshrinement in Canton, Ohio, on Saturday, is the second player off those New England defenses to get into the Hall of Fame after cornerback Ty Law.

Those three titles were it for Seymour, Law and the rest of that batch of New England defenders, while the 44-year-old Brady is at seven and possibly counting, the most recent with Tampa Bay. But Seymour and company get credit for their part of the foundation.

“Those first three Super Bowls, they were all defensive-led teams,” Seymour said. “I think for us, the shift really started to happen right after that. And that’s when Brady really became Brady. And then it really just took off. Offense sells, so I totally get it. But those early teams were led by the defense.”

The sixth overall pick out of Georgia in 2001 after growing up in South Carolina, Seymour played inside and out for the Patriots before spending most of his time at defensive tackle with the Raiders.

Listed at more than 300 pounds in his playing days, Seymour fit the mold of run stopper more than pass rusher. The only mold he cared about was winning.

“I think my story is a story of impact because it was selfless and it was about the team and being a competitor,” Seymour said. “The bigger picture for me is as long as the team valued what I was bringing to the table and they showed it in terms of my contracts and that sort of thing. I knew they valued me, and they told me they valued me.”

Tennessee coach Mike Vrabel, another anchor on those defenses as a linebacker, saw the value when he joined the Patriots as a free agent the same year Seymour was drafted.

“I was in my fifth year, but I really, boy, hadn’t done a whole lot in the league. So we were kind of starting in the NFL for the first time,” Vrabel said. “I just remember, just his size, his length, his power. This was a smart player that could recognize things, would say, ‘Hey, let’s do this.’ I said, ‘OK, yeah, that’s a great idea.’”

So smart that he could ignore homework? Seymour thought so when he was a rookie and defensive coordinator Romeo Crennel gave all the first-year players something to study overnight.

Seymour ignored similar assignments at Georgia, and figured he could do the same in the pros. Until Crennel called on him the next day.

The misstep didn't slow Seymour's path to becoming a leader at the start of New England's two-decade dynasty. He couldn't bring the same success to the Raiders after a 2009 trade, but the legacy was enough for a call from Canton.

“He brought a demeanor. He brought an attitude,” Vrabel said. “He continued to push guys, even as a young player he pushed guys. He had the ability and the confidence enough to push guys that were maybe in their sixth or seventh year and he maybe was in his second or third year.”