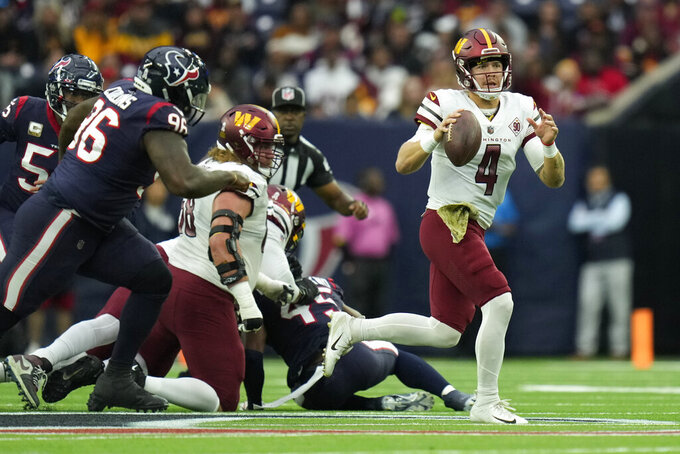 Washington Commanders quarterback Taylor Heinicke (4) is pressured by Houston Texans defensive tackle Maliek Collins (96) as he looks to pass during the first half of an NFL football game Sunday, Nov. 20, 2022, in Houston. (AP Photo/Eric Christian Smith)

TURNOVER DIFFERENTIAL: Falcons minus-1; Commanders even

FALCONS PLAYER TO WATCH: Rookie WR Drake London. Already a starter, London could be asked to carry a bigger load after TE Kyle Pitts went on injured reserve Monday with a knee injury. London, the team’s first-round pick, has touchdown catches in back-to-back games. He leads Atlanta’s run-first offense with 39 catches for 409 yards and four touchdowns.

COMMANDERS PLAYER TO WATCH: QB Taylor Heinicke. He gets the start even after Carson Wentz was designated to return to practice from surgery to repair a broken finger. Heinicke's ability to extend plays with his legs makes Washington's offense challenging, given the two-headed running monster of Antonio Gibson and Brian Robinson Jr. and his options in the passing game from Terry McLaurin on.

KEY MATCHUP: Falcons KR Cordarrelle Patterson vs. Commanders kick coverage. Patterson had a 103-yard kick return TD against the Bears — his ninth of his career, the most in NFL history. Rivera knows Patterson is dangerous every time he has the ball in his hands, and Washington special teams coordinator Nate Kaczor will have his unit ready.

SERIES NOTES: The Falcons are playing at Washington for the first time since 2018. ... Atlanta coach Arthur Smith spent two seasons as a Washington assistant, serving as defensive quality control coach in 2007 and ‘08. His father Frederick W. Smith was a Washington minority owner before Dan Snyder bought him out in March 2021. He’s the founder and CEO of FedEx, the title sponsor of the Commanders stadium, FedEx Field. ... Rivera is looking for his 100th coaching victory, counting the regular season and playoffs.

STATS AND STUFF: The Falcons and Commanders sit just outside wild-card spots in the NFC. ... Atlanta QB Marcus Mariota has seven passing touchdowns and one rushing in five road starts this season. ... Patterson also rushed for 52 yards against Chicago. ... RB Tyler Allgeier ranks third among rookies with 498 yards rushing. ... WR Desmond Ridder will try to become the third Falcons rookie, following Julio Jones in 2011 and Calvin Ridley in 2018, to have TD catches in three consecutive games. Jones' streak lasted four games. ... LB Rashaan Evans led Atlanta with 11 tackles last week. He has 10 or more in three consecutive games. ... S Jaylinn Hawkins had his second interception of the season last week. ... Younghoe Koo made a 53-yard field goal to put the Falcons up on the Bears with less than two minutes left. ... Washington is 4-1 since Heinicke took over for Wentz as the starter. ... Gibson had 103 yards from scrimmage, 72 rushing and 31 receiving, in the victory at Houston. ... Robinson has rushed for 50-plus yards in back-to-back games. ... McLaurin leads the Commanders with 50 receptions. He has at least 50 in each of his first four pro seasons. ... WR Curtis Samuel had his first rushing TD of the season against the Texans. ... DT Jonathan Allen had two sacks last week to tie fellow Alabama product Daron Payne for the team lead with 6½. ... LB Jamin Davis is expected to again start with Holcomb out. ... CB Kendall Fuller intercepted Houston's Davis Mills and returned it 37 yards for a touchdown last week. It was his first career pick-6.

FANTASY TIP: Just about anyone on Washington's offense is a good bet to start, given Atlanta's struggles on defense. Samuel is being used in jet sweeps to run the ball, as well as catching it, so he could have a big day.