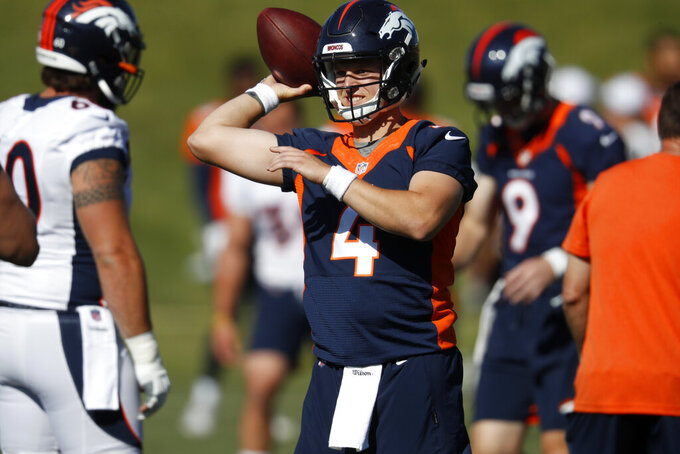 ENGLEWOOD, Colo. (AP) — Joe Flacco will have to wait another week to make his Denver debut.

That means Flacco is slated to make his first appearance for the Broncos on Aug. 8 at Seattle.

Hogan had a rough start to training camp before settling in, and Lock is getting a crash course in the pro-style offense after taking only a handful of snaps from under center during his time at the University of Missouri.

Although there are major questions facing Fangio as he builds his first roster in Denver, the 61-year-old rookie head coach is keeping the front-line starters on the sideline in Canton, Ohio, where former Broncos cornerback Champ Bailey will be inducted into the Pro Football Hall of Fame over the weekend along with team owner Pat Bowlen, who died in June at age 75.

The starters, including receiver Emmanuel Sanders, who participated in 11-on-11 drills Monday for the first time as he continues his comeback from a torn Achilles tendon, will get an extended break this week after reporting to camp a week earlier than usual.

With their first preseason game approaching, the Broncos released their initial depth chart Monday, although Fangio cautioned against reading much into it.

"I'm going to be honest with you. I wouldn't read it at all," Fangio said. "They come in to me and asked me to put this depth chart together. I gave it to the coaches said just put it there. You guys know who's been working with the 1s. Anything after that is a free-for-all, and if you put any stock in to it, you're mistaken."

Fangio said the depth chart doesn't matter until "we cut down to 53," which isn't for another month.