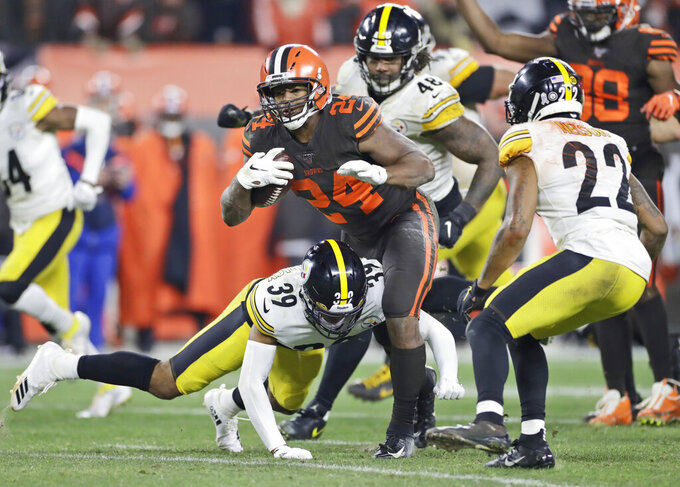 Cleveland Browns running back Nick Chubb (24) rushes during the second half of the team's NFL football game against the Pittsburgh Steelers, Thursday, Nov. 14, 2019, in Cleveland. The Browns won 21-7. (AP Photo/Ron Schwane)

Fantasy football users will find Week 12 a daunting expedition of challenging matchups, especially those who rely on the Cardinals, Chiefs, Chargers and Vikings, who are all on a bye.

With few projected offensive slugfests on the docket, scores could be low, but for those competing for playoff spots or building a money-winning DFS lineup, finding hidden gems will be key to success.

START: Sam Darnold, QB, Jets: The second-year pro is turning a corner, evidenced by a 6:2 TD to INT margin over the past three weeks. Darnold could continue to shine for his fantasy users as he faces a Raiders defense that allows the eighth-most fantasy points to opposing quarterbacks along with the third-most touchdown passes allowed (24).

SIT: Jared Goff, QB, Rams: Goff has failed to throw a touchdown pass in his past two games while also tossing three interceptions. The Ravens have solved their early season issues against opposing passers and have allowed the fourth-fewest fantasy points to opposing quarterbacks. Baltimore is also tied for third with just nine touchdown passes allowed.

START: Nick Chubb, RB, Browns: The lack of touchdowns is a mild concern, but Chubb has rushed for at least 87 yards in eight of his past nine games, including four games of at least 100 yards. He’s a definite must-start against a Dolphins defense that has allowed the sixth-most fantasy points to opposing runners and is second only to the Bengals in most rushing yards allowed.

SIT: Miles Sanders, RB, Eagles: Granted, it was the Patriots D, but Sanders managed just 38 yards on 11 carries while getting the bulk of the carries with Jordan Howard down. If Howard is sidelined again, a heavy dose of Sanders may not go far against the Seahawks, who ranked 12th overall in fewest rushing yards allowed.

START: T.Y. Hilton, WR, Colts: He’s a potential game-time decision, but if Hilton plays, it presents another opportunity to continue his career of dominating against the Texans secondary. In 15 games against Houston, Hilton has a combined 82 catches for 1,519 yards and 10 touchdowns, numbers he can improve on as the Texans have the sixth-worst fantasy defense against opposing receivers while also giving up 22 touchdown passes.

SIT: Terry McLaurin, WR, Redskins: His production has continued to decline. After breaking out as a reliable WR2, McLaurin has not scored a touchdown since Week 6 while totaling a mere 158 yards since Week 7. The uncertainty of rookie quarterback Dwayne Haskins also does not help his cause, even against a Lions defense that has allowed the third-most receiving yards and fifth-most TD passes.

START: Mark Andrews, TE, Ravens: Lamar Jackson has no qualms of getting his tight end heavily involved, having targeted him eight times in three of the past five games. Andrews also has scored three touchdowns in the past two games and is also the best deep threat at his position, having caught 11 passes for at least 20 yards this season.

SIT: Jimmy Graham, TE, Packers: The 49ers have made opposing tight ends a non-factor, ranking second only to the Bills in fewest fantasy points allowed at the position. Graham has yet to have more than 65 receiving yards this season and has 20 or fewer yards in three of his past five games. There will be better options on the waiver wire.

START: DJ Chark, WR, Jaguars: His two best games this season have come with Nick Foles under center as two of his three 100-yard games have come with the former Super Bowl MVP at the helm. Chark will be good for double-digit targets and will benefit from the Titans’ focus on RB Leonard Fournette.

SIT: Dak Prescott, QB, Cowboys: Prescott has accounted for 1,098 yards and nine touchdowns in his past three games but will face the almost impregnable pass defense of the Patriots, who have allowed the fewest fantasy points to opposing quarterbacks. New England has given up just four touchdown passes and a league-low 5.3 yards per completion, numbers that will cool off the fantasy playoff hopes of anyone willing to start Prescott.

START: Chris Carson, RB, Seahawks: The Eagles have allowed the fourth-fewest rushing yards in the league but will run into a back that has rushed for at least 89 yards in six of his past seven games. Carson also has had four 100-yard outings in that span and could be the rare back who can generate yards on Philly, especially if the Eagles are too worried about stopping Russell Wilson and the passing game.

SIT: Nelson Agholor, WR, Eagles: In the past two games, Agholor has just seven receptions on 17 targets. A 41.1% reception rate isn’t going to cut it. The Seahawks are 28th in passing yards allowed per game and while the receiving options for QB Carson Wentz are thin, starting Agholor — who has not exceeded 50 receiving yards since Week 2 — is going to produce limited results.

START: Jamison Crowder, WR, Jets: The prime beneficiary of Sam Darnold’s recent success, Crowder has caught 18 passes for 240 yards and three touchdowns in his past three games. Oakland is 27th in passing yards allowed per game, making Crowder a solid option in any format.

SIT: Brian Hill, RB, Falcons: Devonta Freeman’s replacement is averaging just over 3 yards per carry and has had little impact in the passing game. Now is not the time to bank on Hill’s numbers taking an upswing considering that the Buccaneers are second overall against the run and third in yards per carry allowed.

START: Derrick Henry RB, Titans: Henry has averaged 104 yards in his past four games along with adding four touchdowns. The Jaguars have allowed the 10th-most fantasy points to opposing running backs and with the way Henry has run over the past month, expect Henry to keep his solid RB1-level production rolling.

SIT: Tyler Eifert, TE, Bengals: The Steelers have allowed the fifth-most fantasy points to opposing tight ends, but it doesn’t mean adding Eifert to your roster, as he has managed 21 yards or fewer in five of his past six games.