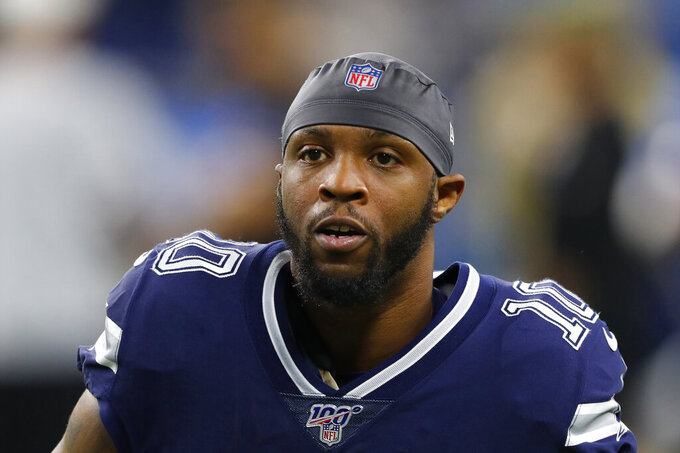 FILE - This Sunday, Nov. 17, 2019, file photo shows then-Dallas Cowboys wide receiver Tavon Austin during pregame of an NFL football game against the Detroit Lions in Detroit. Austin is attempting to make a comeback with Green Bay as the Packers look to add depth to their receiving group. The Packers announced Tuesday, Dec. 1, 2020, that they had signed Austin and released wide receiver Darrius Shepherd. (AP Photo/Paul Sancya, File)

Tavon Austin says he still has the same skills he possessed back when his impressive 40-yard dash times helped make him the No. 8 overall pick in the 2013 draft.

Austin is eager to showcase that as the Green Bay Packers’ newest acquisition attempts to revive his career.

The Packers signed Austin this week to boost a receiving unit that lacks depth beyond three-time Pro Bowl selection Davante Adams, Marquez Valdes-Scantling and Allen Lazard. It marks perhaps one final chance for Austin, who has never quite lived up to his lofty draft position.

Austin notes that he’s played for several different quarterbacks and in plenty of different offensive systems since joining the NFL. The 5-foot-8 speedster hopes Green Bay offers him a chance for stability.

“Hopefully I just come and add a little more threat to the offense, just free people open and sometimes I get the ball as well and show what I can do,” Austin said.

The San Francisco 49ers placed Austin on injured reserve before the season and later reached an injury settlement with him as he dealt with a knee problem. Austin said he’s been feeling better for about the last three weeks.

He reunites with Packers coach Matt LaFleur, who was the Rams' offensive coordinator in 2017 when Austin was still with Los Angeles. Austin spent his first five seasons with the Rams, who traded up to take the former West Virginia star with the eighth overall pick in 2013. Austin played for the Dallas Cowboys from 2018-19.

“He’s very explosive,” LaFleur said. “I love the way he works and just the energy he brings all the time. We’ve got to get him kind of acclimated to what we’re doing and how we call things. ... So we’ll just see where he’s at and kind of evaluate it and take it day by day.”

Austin says he already has noticed a difference in what it’s like to work with Packers quarterback Aaron Rodgers. He noted how the two-time MVP might ask a question at random points during meetings just to make sure everyone knows the task at hand.

“I always respected him, but now being in the meeting room with him, you can definitely see it’s a big difference,” Austin said. “I thought I was a big study guy and I knew my stuff, but compared to him, I really don’t know anything.”

Austin believes he can help a team in plenty of different ways.

His 15 touchdown catches and 10 touchdown runs show he can fill a variety of roles, whether it’s running a pass route or a jet sweep. Austin also has experience returning punts.

“Truly at heart I am a receiver, and to be honest, I am a running back as well,” Austin said. “It’s just about somebody really giving me the chance and really believing in me and letting me get comfortable and letting Ta do what he do best, how I did my whole life.”

“I was a fan of Tavon’s in college,” Rodgers said. “I remember watching him, just how electric he was.”

Austin believes he can still provide a spark. Now he has a chance to prove it.

NOTES: Center Corey Linsley didn't practice again Thursday as he deals with a knee injury that knocked him out of the Packers' victory over the Chicago Bears on Sunday. He also didn't practice Wednesday. ... Guard Lucas Patrick, who left the Bears game early with a toe injury, was a limited practice participant.