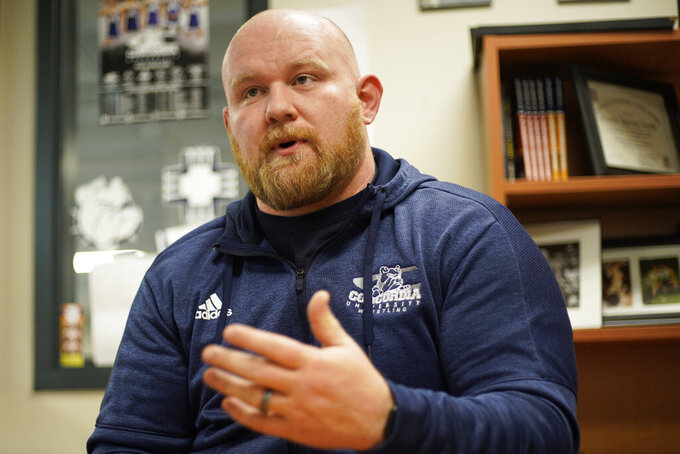 In this March 2, 2020, photo, Concordia University wrestling coach Levi Calhoun speaks in his office in Seward, Neb. Calhoun knew that Tanner Farmer, the former Nebraska football player, would definitely be a force in the NAIA, but did not expect him to be as dominant as he has been." (AP Photo/Nati Harnik) 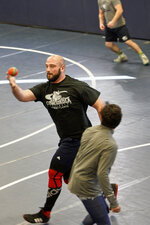 SEWARD, Neb. (AP) — Tanner Farmer just wants to be another guy on the Concordia University wrestling team, and for the most part he is.

The big lug likes to sneak up behind teammates anywhere and anytime, wrap them in bear hugs and lift them up. He starts singing and dancing for no reason. He's the ringleader of the daily pre-practice game of “Spikeball,” a cross between volleyball and the playground game “four square.”

A year ago at this time, Farmer was thought to be on the rise as an NFL draft prospect. He had started three years on Nebraska's offensive line and turned in a stellar performance at the Cornhuskers' pro day.

It turned out he went undrafted. He got looks from the Indianapolis Colts and Houston Texans and the CFL's Winnipeg Blue Bombers, but nothing panned out.

“Well, what do I do now? What's the next step?" Farmer said he asked himself.

He didn't see this coming.

He was working as a volunteer assistant with the Concordia football team and taking graduate courses last fall when he found out that under National Association of Intercollegiate Athletic rules he had one semester of eligibility if he wanted to compete in another sport.

A two-time state champion for Highland High School in Illinois in 2013-14, he had joked with wrestling coach Levi Calhoun about joining the team. When he found out he really could, Farmer was all in.

“He definitely fell into our lap,” Calhoun said, “and it's been awesome.”

Farmer lost 25 pounds to get down to 285, got himself back into wrestling shape and won all 22 of his matches. He was named Great Plains Athletic Conference wrestler of the year and is the No. 2 seed in the NAIA national tournament scheduled Friday and Saturday in Park City, Kansas. The top seed is Brandon Reed (23-2) of Lindsey Wilson College (Ky.)

“I kind of didn't expect to go through the season this far without a loss," Farmer said. “There were a couple times in matches where I thought this was it. But I pushed through."

Other than working out with the Nebraska wrestling team during football offseasons, Farmer had been away from the sport. With his technique rusty, he's been able to call on the mauler inside him to overpower opponents.

“I knew he definitely would be a force in the NAIA,” Calhoun said. "I don't know that we expected him to be as dominant as he has been.”

“After that happened," Calhoun said, “we knew he had something special and he could win a national title.”

Based on early practices, teammate Blake Sang wouldn't have imagined Farmer going unbeaten. Farmer struggled with cramps and endurance and sweat poured out of him.

“He was cramping up because he wasn't used to practicing that hard and losing that much water. It was cool to see how he got so much better over two months. His body wasn't able to handle it, and now he's competing and is 22-0. That's pretty freaking good.”

Farmer, who has a Nebraska “N” tattoo on his left bicep, is never far removed from his past as a Cornhusker. He lives in Lincoln, a half-hour drive from the Concordia campus, and still visits the Huskers' football offices. He said coach Scott Frost, offensive line coach Greg Austin and former teammates are big fans of his wrestling endeavor.

His journey from big-time football to small-college wrestling has created a buzz in the NAIA, and he was recognized and approached by wrestlers from other teams and fans when he was at meets, especially ones in the state.

Naturally, teammates like to give him grief about receiving the star treatment, calling him “THE Tanner Farmer” or “Big Shot.”

Farmer takes the ribbing, but grudgingly.

“I really don't want that to be an issue with anybody I come into contact with, the fact I was a three-year starter (at Nebraska) shouldn't affect how somebody treats me or interacts with me,” he said. "I'm just another guy. I want to be their friend, I want to be a good teammate."

At the same time, Farmer knows his ties to Nebraska football have brought exposure to the 1,200-student school he had never heard of until last summer.

“If it helps the school,” he said, “I'm all for that. I want to help them succeed as much as I can, however I can.”

Farmer is in Seward almost every day for wrestling and his part-time warehouse job at Big Cob Hybrids seed company. He's working on dual master's degrees in athletic administration and business administration and takes all his classes online.

He might not be done with wrestling after this weekend. He said he would like to compete at the international level and make a run at qualifying for the 2024 Olympics.

“I'm constantly getting better. I have so far to go,” he said. "I'm just starting to scratch the surface of my potential.”