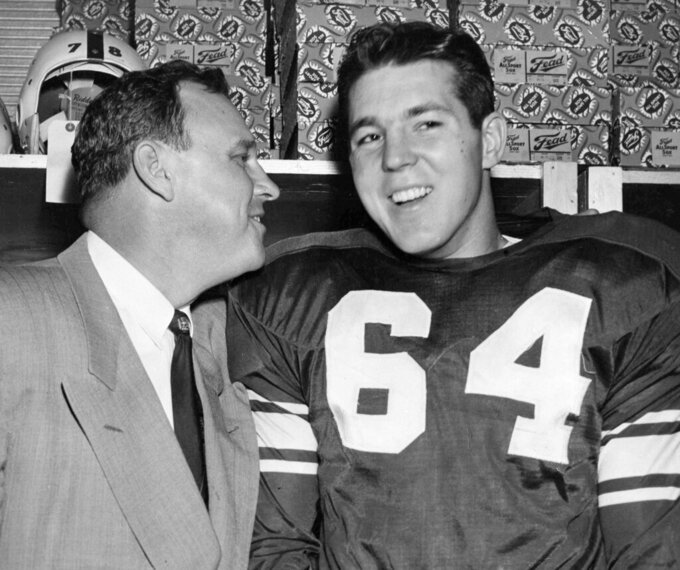 FILE - In this Nov. 30, 1955 file photo, J.D. Roberts, University of Oklahoma's senior guard, talks over with OU line coach Gomer Jones about his being named winner of the John B. Outland trophy as the outstanding lineman of the year, in Norman, Okla J. D. Roberts, the second coach the New Orleans Saints and man who made Archie Manning his quarterback, has died, Monday, May 24, 2021. He was 88. (AP Photo)

NEW ORLEANS (AP) — J.D. Roberts, the second coach of the New Orleans Saints and the man who made Archie Manning his quarterback, has died. He was 88.

Roberts died Monday, according to the Memorial Park Funeral Home in Oklahoma City.

The former Marine lieutenant had a long stint as an assistant coach in college before becoming an original member of the Saints’ staff in 1967.

Roberts also served as the first coach for Manning, who had a prolific career with the Saints, mostly on losing teams, but is now best known as the father of two quarterbacks who won two Super Bowls each: Peyton Manning and younger brother Eli.

New Orleans finished 7-25-3 under Roberts. He was instrumental in the Saints' decision to take Archie Manning with the No. 2 overall pick in the 1971 draft.

“He put me in right away whether I was ready or not, and he could have easily pulled me out sometimes, because there were a lot of struggles,” Manning said of Roberts in a statement on the team's website. “But he always had my back and supported me.”

Prior to coaching, the Dallas native played offensive and defensive line under head coach Bud Wilkinson at Oklahoma, where he won the Outland Trophy as the nation’s top college lineman in 1953. Roberts was inducted into the College Football Hall of Fame in 1993.

Roberts was selected in the 17th round (195th overall) of the 1954 draft by the Green Bay Packers but never appeared in a regular-season game.

He was an assistant college coach at the University of Denver, Houston, Navy, Auburn and Oklahoma before coming to New Orleans as a scout and linebackers coach.