Giants' Ballentine coping with shooting after being drafted 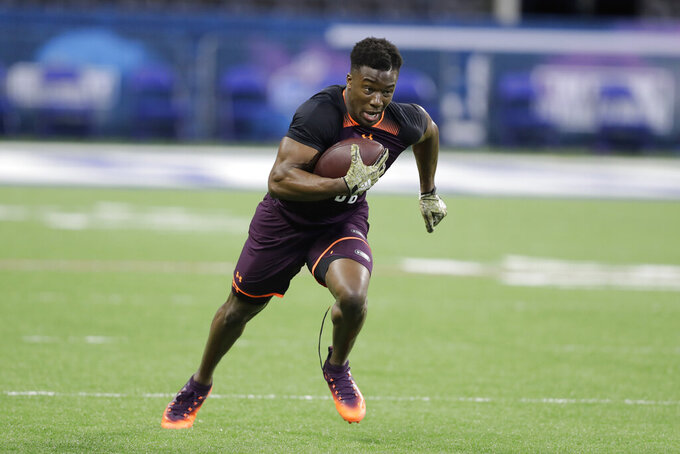 FILE - In this March 4, 2019 file photo Washburn defensive back Corey Ballentine runs a drill during the NFL football scouting combine in Indianapolis. The New York Giants cornerback who was wounded hours after being drafted in an April shooting that claimed the life of his Washburn University teammate is trying to make a career in the NFL not only for himself but also his late best friend. "There have been a lot of highs and lows," Ballentine said Sunday, July 28, 2019 before the Giants finished their first week of training camp. (AP Photo/Darron Cummings, file)

EAST RUTHERFORD, N.J. (AP) — The New York Giants cornerback who was wounded hours after being drafted in an April shooting that claimed the life of his Washburn University teammate is trying to make a career in the NFL not only for himself but also his late best friend.

Speaking to the Giants media for the first time since the shooting in Topeka, Kansas, Corey Ballentine said he is still haunted by the random late-night attack after attending an off-campus party.

The 23-year-old, who was shot in the rear end, said he thinks of Dwane Simmons almost every day and he was relieved police recently made an arrest in the shooting. He said it took him a while to get his mind back on football and he is seeing therapists to help him cope.

The Giants advised Ballentine to skip the team's rookie camp a week after the draft.

"There have been a lot of highs and lows," Ballentine said Sunday before the Giants finished their first week of training camp. "I am trying to stay focused on football now. But everybody knows about the situation I was in. I don't want to speak on it too much out of respect to my friend. I am trying to deal with it on my own. The Giants are helping me, I am seeing a therapists. I kind of realize I can't keep myself in that mental space."

Ballentine said making the NFL was always a dream for him, but now he is trying to fulfill two dreams. One for him and one for Simmons, who also was a defensive back at Washburn.

"I think he helped me get here every step of the way," Ballentine said. "When I was on the field by myself he would come out there and join me. I am doing it for both of us. If he was here now he would love to see where I am at and how I am doing."

"I am going to try to keep him in my heart," Ballentine said. "At the same time, try to strive for the good of the team and my own personal goals, just do my best."

Ballentine said he has recovered from his wound and he feels 100 percent physically.

He made one of his first marks in practice on Saturday, intercepting a pass.

However, he said getting totally focused on football took some time.

Being back on the field has helped ease his mind and help him move forward. So did the arrest.

The Shawnee County district attorney in Kansas announced roughly two weeks ago that Francisco Alejandro Mendez, 18 was charged with first-degree murder, attempted first-degree murder and five counts of aggravated battery in the April 28 attack. The Kansas man is being held on a $1 million bond.

"Each day, he looks a little bit more comfortable," Shurmur said. "I would say it's running parallel with two things. Obviously, coming back from the gunshot. And then also just becoming more comfortable in the defense. He made a play yesterday which was good, and he's generally been in the right spot. He's been competing. We're sort of pleased to this point with his progress."

While the Giants have given Ballentine time to get over his wound and support him in his recovery, he knows life and the NFL are not going to wait for him.

"I think personally that it's time for me to be strong now," he said. "I can't keep thinking about that and dwelling on it, I've got to move forward. If I want to make this team, I've got to learn the plays, I've got to execute, things like that. So, mentally I just kind of shifted mentally, knowing the obligations that I have to do, and just moving forward with it."

Ballentine also knows one other thing. Dwane Simmons will be with him on the journey.