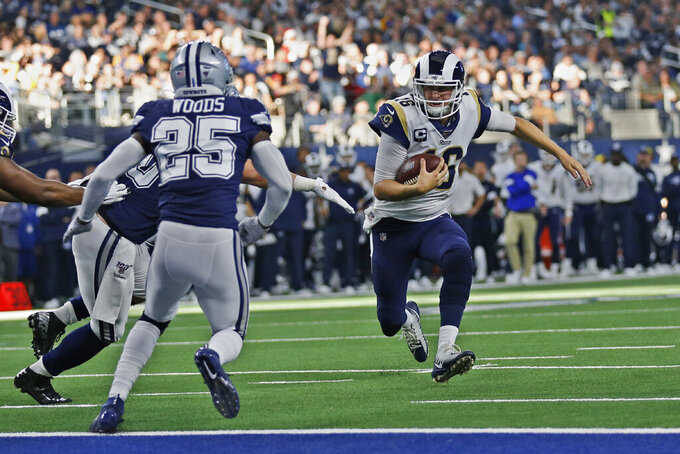 Los Angeles Rams quarterback Jared Goff (16) is about to be stopped short of the goal line by Dallas Cowboys outside linebacker Sean Lee, left, as Cowboys' Xavier Woods (25) moves in during the first half of an NFL football game in Arlington, Texas, Sunday, Dec. 15, 2019. (AP Photo/Roger Steinman)

THOUSAND OAKS, Calif. (AP) — Jared Goff is confident the bruise on his right thumb will heal in time for the Los Angeles Rams' visit to the San Francisco 49ers on Saturday.

Even if his throwing thumb didn't improve, Goff could scarcely be less effective than he was earlier this season against the Niners in one of the worst games of his career.

Goff passed for a career-low 78 yards in the Rams' 20-7 loss to San Francisco in Week 6. His 13-for-24, four-sack nightmare was just one aspect of a comprehensive loss that firmly underlined the shift in power in the NFC West from the Rams to the Niners and Seahawks, who had beaten LA one week earlier.

Goff remembers the loss vividly, and not just because it came at the hands of his favorite childhood team.

“It was so long ago, but we did execute well on that first drive,” Goff said when he recalled the Rams' opening 56-yard TD drive — which was followed by only 101 more yards all day.

“From there on out, we didn’t execute at all," Goff added Tuesday. "It’s just up to us executing every play, every down and every series. They’re a good defense, they’re a good team, and we’ve got to be on our stuff if we want to do our best in this game.”

Goff hurt his hand last Sunday when he banged it on left tackle Andrew Whitworth's helmet in another embarrassing loss — the Rams' 44-21 defeat at Dallas. Goff and coach Sean McVay didn't think the quarterback's injury impeded his throwing against the Cowboys, but he managed just 284 yards passing on 51 attempts in the Rams' latest curiously inert performance in their up-and-down season.

Goff had a compression brace around his hand earlier Tuesday, but its primary function appeared to be as a source of amusement for his co-workers.

“He had a nice little compression sleeve on that looked kind of goofy,” McVay said. “But I think he should be in good shape.”

Although he refuses to share any personal insight about it, Goff has been just as inconsistent as his team this season, often performing admirably and embarrassingly in consecutive weeks. He is fourth in the NFL with 3,996 yards passing, but only three quarterbacks have more than his 15 interceptions, and his 17 touchdown passes are tied for 20th in the league.

Just over 10 months after Goff started in the Super Bowl, the Rams (8-6) are all but eliminated from playoff contention. To make their third straight postseason appearance, the Rams would have to win their final two games while the Minnesota Vikings lose at home to Green Bay and Chicago.

Los Angeles clearly needs more from the quarterback who agreed to a $134 million contract with an NFL-record $110 million guaranteed this season. Goff will receive even more scrutiny when his salary cap hit skyrockets next season, but the preternaturally even-keeled quarterback seems uninterested in pressure or self-analysis.

That's not always a positive in an emotionally riven sport like football, but McVay thinks the Rams can be motivated with the quiet quarterback as their leader.

“I think that's a good thing,” McVay said of Goff's calm. “No. 1, you've got to be yourself, because that resonates with your teammates and the people you work with more than anything else. ... As long as it’s authentic and true to your personality, with some urgency and with a demanding approach that’s solution-oriented like we talk about, I think guys respond to that."

NOTES: The Rams didn't practice Tuesday, but K Greg Zuerlein (strained quadriceps) and CB Troy Hill (broken thumb) would not have been able to participate if they did, McVay said. He doesn't know whether the Rams will have to sign a kicker to fill in for Zuerlein, but they have identified kickers who could do the job if necessary. ... DT Aaron Donald and CB Jalen Ramsey landed on the NFC's Pro Bowl roster. Donald earned his sixth straight nod, while Ramsey was chosen for the third time in his career despite playing in only 11 games this season without making an interception. Goff and Todd Gurley, who made the list in each of their first two seasons in McVay's offense, were not selected, although Gurley is an alternate.