Going for it: Bolts vow to stay aggressive on 4th downs 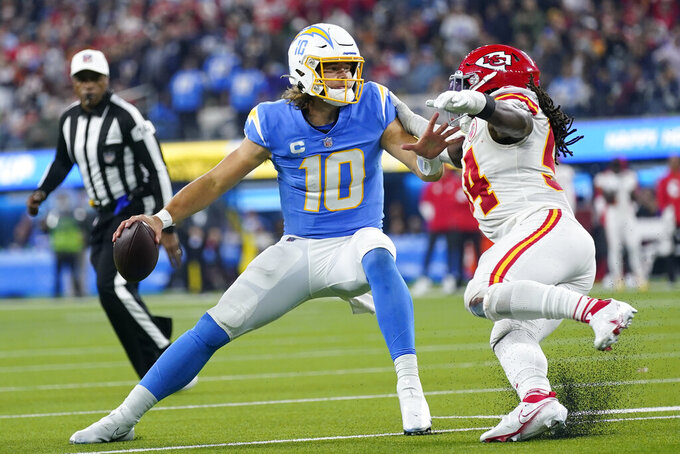 INGLEWOOD, Calif. (AP) — Brandon Staley did not apologize because he isn't sorry.

The Los Angeles Chargers' rookie head coach did not lament leaving a bunch of probable points on the field Thursday night because he didn't regret it.

For as long as Staley is in charge, he vows the Bolts are going to be highly aggressive on fourth downs — even after that defiant mentality left the football world wondering whether it cost Los Angeles a crucial game against Kansas City, the team it's trying to dethrone atop the AFC West.

The Chargers (8-6) went 2 for 5 on fourth downs in their 34-28 overtime loss to the Chiefs, with two failed attempts to convert inside the Kansas City 5 and another on the edge of field goal range. Staley's decisions were analytically sound and aggressively supported by his players, but the Chargers' failures to convert invited the nation to second-guess Staley's immutable belief in his philosophy and in Justin Herbert's offense.

“That’s going to be the mindset no matter who we play," Staley said. “That’s the way you need to play against Kansas City for sure, and that’s how we’re going to become the team that we’re ultimately capable of being, is by playing that way.”

The Chargers entered the game 13 for 21 on fourth downs this season, giving them the fourth-most conversions in the league. Their conversion percentage (61.9) was tied for eighth-best in the NFL.

Those missed points might have made the difference, or they might have not: With Patrick Mahomes and Tyreek Hill on the other sideline, Staley and his coaching staff realized no lead would be safe until the clock ran out. That's why they never stopped trying to score in all situations: Only the very last of the Chargers' 10 drives ended in a punt.

“I know that the quickest way to win a game like that is to score touchdowns, not field goals, especially considering who’s on the other side,” Staley said. “When you don’t feel like it’s a gamble, when you feel like this is an advantage for you, then that’s going to be our mindset. And I don’t think that any decision that we made tonight, that I made tonight, was a gamble. We felt like it was an advantage situation for us, and that’s why we did it.”

Donald Parham seriously injured himself while coming down just out of bounds with a catch in the back of the end zone on the Chargers' failed fourth down from the Kansas City 5 on the game's opening drive.

Four drives later on the final snap of the first half, Herbert was in the shotgun on fourth down from the Kansas City 1 — but Daniel Sorensen got his hand on a quick out to Keenan Allen, wiping out a potential TD pass and leaving the Chargers' halftime lead at only 14-10 despite 208 yards of offense on five solid drives.

The Chargers' only drive of the third quarter ended at the Kansas City 28 when Herbert and Jared Cook couldn't connect on a fourth-and-2 pass. Cook also dropped a probable touchdown pass on second down during that final drive before halftime.

“It’s always tough, and you’d love to be able to convert those," Herbert said. “I think we need to be better on third downs so we’re not in those situations, but we believe in each other. We believe in the guys in that locker room, in that huddle. We believe in the defense, and so I think that’s a statement of trusting everyone.”

Staley hasn’t concealed his mentality on fourth downs: Ever since he capped his meteoric coaching rise by getting this job after only four seasons as an NFL assistant, Staley has proclaimed his plan to go for it on fourth downs as aggressively as any coach in the league.

This new-school, cutting-edge thinker embraces the analytical aspects of football thinking, but he also believes this declaration creates an identity for the Chargers, who have often lacked it in previous decades.

“It's tough, it's always tough, (but) we ride with Coach, whatever decision he makes,” Chargers cornerback Chris Harris said. “But that's how we've played all year, and we just lost that way today. We could have definitely been up a lot more, but that's the way we play. We play going for it all the time, all year long. Coach believes in us to get the fourth down, and we believe in ourselves to get it. It just didn't happen tonight.