Hackett nixed 7-on-7 drills this summer for safety, science 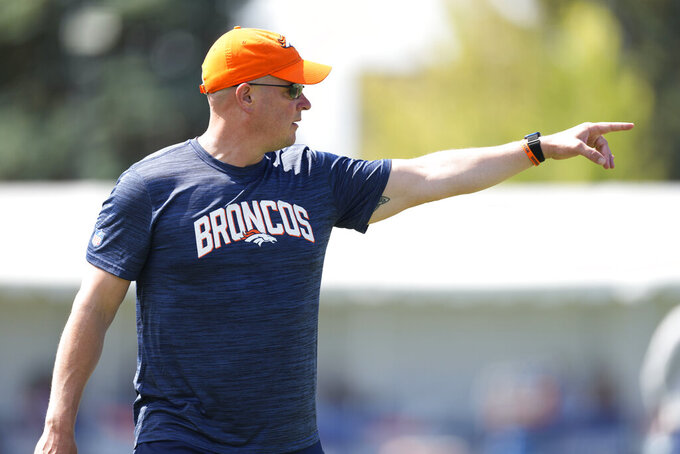 DENVER (AP) — Nathaniel Hackett's first training camp in Denver was notable for its paucity of hard hits, at least until a joint practice with the Dallas Cowboys.

What really turned heads, however, was Hackett's decision to ditch 7-on-7 drills, the staple of today's pass-heavy offenses pitting the quarterback, his snapper and five pass catchers against a mix of defensive backs and linebackers.

With no big bodies mucking up the middle and no hand-offs to worry about, quarterbacks work on their rhythm with receivers, who sharpen their skills going against D-backs trying to disrupt it all.

At the same time, the offensive and defensive linemen usually head to an adjacent field for often-spirited 1-on-1 pass rush drills.

Hackett nixed those, too.

Hackett, who came to Denver from Matt LaFleur’s staff in Green Bay, where the Packers de-emphasized but didn’t quite eliminate the 7-on-7s drills, instead conducted more 11-on-11 drills.

He said he wanted to give his players more “real football” work, an approach that might prove critical with most of his projected starters staying on the sideline in the preseason.

“I appreciate Coach Hackett,” right tackle Calvin Anderson said. “I think he's a revolutionary mind and he's not afraid to think outside the box and do something new.”

Former NFL offensive lineman Tyler Polumbus said he would have felt awkward heading into a season without the standby drills.

“It’s a different era and clearly it’s worked for the Packers,” Polumbus said. “But I’m not going to lie, I’ve got my reservations about it."

“For us the big boys, during 7-on-7s, that’s when we do our 1-on-1s. So I know that was huge for me,” Polumbus explained. “Honestly, I’m not sure how confident I would feel going into the season right now because 1-on-1s, it’s the only time that you can go out there and work on your craft.

“I could try new things and not be afraid to blow up the play and in 11-on-11 I’m afraid to try new things," Polumbus said. "Because if I try something new and I get beat, well, I get the play blown up and everybody’s yelling at me.”

When Hackett sat down for a pre-practice interview one morning on local radio, he was asked how he'd respond to the Denver radio station's half dozen or so former NFL players-turned-commentators including Polumbus who were crushing him for his low-contact approach to camp and for ditching the 7-on-7s.

Hackett explained that he chose safety over tradition and science over habit. His goal, he said, was to get to the season healthy so he wasn't going to overwork his players with too much hitting or overexpose them to injury through drills he feels are superfluous.

Only twice did the Broncos conduct any 1-on-1 drills during camp, and those involved receivers facing D-backs and tight ends and running backs lining up against linebackers.

"That was by popular demand, for sure," Hackett said. "It’s good for some of those young guys to get those reps against each other. The crowd loves it.”

A handful of other NFL coaches have tweaked their offseason work regimens regarding 7-on-7s. Bills coach Sean McDermott cut down on his 7-on-7s, but maintained his 1-on-1 pass rush drills. Giants coach Brian Daboll used spring OTAs for his 7-on-7 drills and, like Hackett, stuck with 11-on-11s this summer.

Vikings defensive coordinator Ed Donatell is among those who still swear by the value of 7-on-7s.

“You know there’s a purpose for it," he said. "You want to rest your big guys some during that time and we can get a lot of recognition, speed recognition, on the pass. We lose the play action, run-pass part of the ID for our players, but I’ve always been a fan of it.”

NFL receiver-turned-radio host Brandon Stokley said 7-on-7s allow players to gain confidence, get their timing down, work out the kinks and even experiment.

“You see 7-on-7 in middle school on up, it's a big deal," Stokley said, invoking his buddy Peyton Manning.

“So, it's a different approach the way Nathaniel Hackett is doing it. It’s different than the school I grew up in and the things I thought were beneficial. I guess the proof will be in the pudding.”

Win and maybe it's a trend. Lose and it might just be a fad.

Polumbus suggested that ditching 7-on-7s makes it harder for players to rise up the depth chart because they don't have nearly as much of an opportunity to make their mark.