Hizzoner! Jets rookie Sanders was mayor of hometown for day 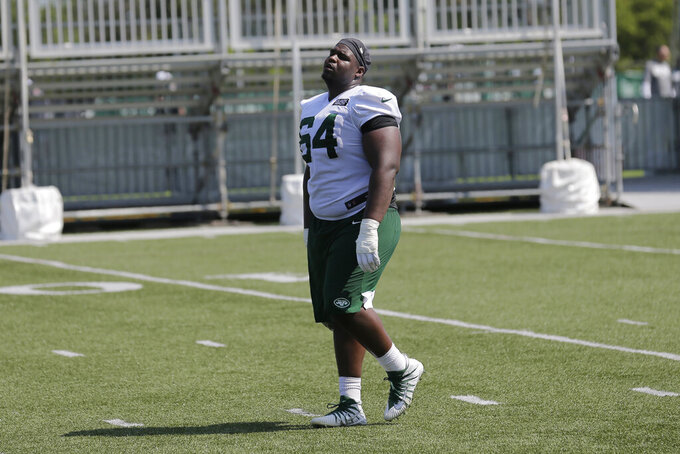 In this July 25, 2019 file photo New York Jets' Trevon Sanders leaves the field after a practice at the NFL football team's training camp in Florham Park, N.J. Sanders spent some time off from crushing ballcarriers on the football field to crunch numbers for the city budget. Lengthy meetings with local leaders, spirited conversations and hearty handshakes _ lots of them _ were all in a day's work for Hizzoner. The New York Jets rookie defensive lineman was honored in February as the Mayor for the Day in his hometown of North Charleston, South Carolina, trading in his jersey for a spiffy jacket and tie. (AP Photo/Seth Wenig, file)

FLORHAM PARK, N.J. (AP) — Trevon Sanders spent some time off from crushing ball carriers on the football field to crunch numbers for the city budget.

Lengthy meetings with local leaders, spirited conversations and hearty handshakes — lots of them — were all in a day's work for Hizzoner.

The New York Jets rookie defensive lineman was honored as the Mayor for the Day in his hometown of North Charleston, South Carolina, in February, when he traded in his jersey for a spiffy jacket and tie.

"I got to dress up, wear a suit," Sanders said with a big smile. "I really followed the mayor all day and did what he did. I learned a lot and it was really cool because not everybody gets to do stuff like that."

"I got the opportunity to see and have the insights on how the city government works and how the mayor does his job and the people that work for him and their jobs," Sanders said. "Just really getting an understanding and a grasp of not just looking outside-in, but really looking inside-out and not judging it and really seeing the depths of everything."

The 22-year-old Sanders — who was a criminal justice major with a minor in human services in college at Troy University — jokingly acknowledged that some of the meetings were "kind of boring" but said he was intrigued by the budgeting session.

"I'm in the meeting and giving my input like: 'Well, why are y'all spending this money here? Like, why do you need new badges and stuff?'" he said with a laugh. "It was kind of crazy, but those things are set in place for a reason, to make the city better and make everything flow much better in the city. So, there's a need for it. But you know people outside looking in, they don't understand that. They're like, 'Well, where's our money going as taxpayers?' Your money is going really where it needs to go and for stuff the city needs."

Sanders capped his memorable day by receiving the key to the city, with Summey and his staff surprising him and his mother, Shawn, during a ceremony at city hall.

"I was like, 'Man, that's crazy,'" Sanders said. "It really hit home. That gives me the power and the energy to keep going and be the person I am today, and continue to help people, help the youth coming up under me and just continue to live life and flourish."

He is a role model to his 12-year-old sister, Tre'Asia Anderson, and an inspiration to his entire community. Sanders was guided by his mother and grandparents as a child, growing up in a single-parent home.

"I'm very proud of Trevon," Shawn Sanders said in a telephone interview. "It still hasn't sunk in yet that he's where he is. As a single mom, I never settled for anything less than being the best he can be. And he knew that. It was hard because the area we lived was not the best, so keeping him grounded was hard. But, he knew as his mother, I wouldn't take anything less than the best from him."

That meant staying off the streets and keeping his focus on his grades and football.

He earned first team all-state, all-county and all-region honors in his senior year at the Garrett Academy of Technology, where his jersey was recently retired. He worked hard on and off the field to earn an athletics scholarship to Troy.

Just the way she and his grandparents did for him. His grandfather, William, served as his father figure, the man he idolized and wanted to emulate.

William Sanders died in May — but not before seeing his grandson's special achievements.

Shawn Sanders was working at the South Carolina Department of Motor Vehicles last winter when she discovered that Reggie Burgess, North Charleston's chief of police, is her mother's nephew. Burgess came in one day and Sanders told her about the family connection.

The two got to talking, and the topic of the city's Mayor for the Day honor came up.

"I told him my son was a candidate," Shawn Sanders recalled. "He called it up on his phone and said: 'This guy? This guy is your son? This guy is my cousin, and he's going to be mayor of the day?' He was so excited."

Trevon Sanders graduated in May with a 3.5 GPA, hoping to someday — long after playing football is done — work in homeland security.

"He has matured so much in the last couple of years," Summey said in a video posted by North Charleston. "I think he is the living proof (of) a determined mom in a single-parent environment pushing her child and making sure that he is doing the things he needs to do to achieve."

For now, Sanders is trying to win a spot on the Jets' roster as an undrafted rookie out of Troy, where he was a run-stuffing nose tackle for four seasons and a member of the All-Sun Belt first team as a senior.

He faces a tough challenge to make the Jets, especially with New York having some depth on the interior line with first-rounder Quinnen Williams and veterans Steve McLendon and Leonard Williams anchoring things. At 6-foot-2, the 327-pound Sanders is considered on the small size for a nose tackle.

He shrugs off all of the doubters — just as he has his whole life.

NOTES: The Jets claimed S Godwin Igwebuike off waivers from Philadelphia, signed TE Nick Truesdell and waived CB Jeremy Clark and OL Tyler Jones. Igwebuike was cut by the Eagles on Saturday, and spent last season with Tampa Bay and San Francisco. Truesdell has spent time with Indianapolis and Minnesota, and has also had stints in the AFL, the Indoor Football League and the Alliance for American Football. Clark was the Jets' sixth-round draft pick in 2017. Jones signed with New York in May as an undrafted rookie out of NC State.